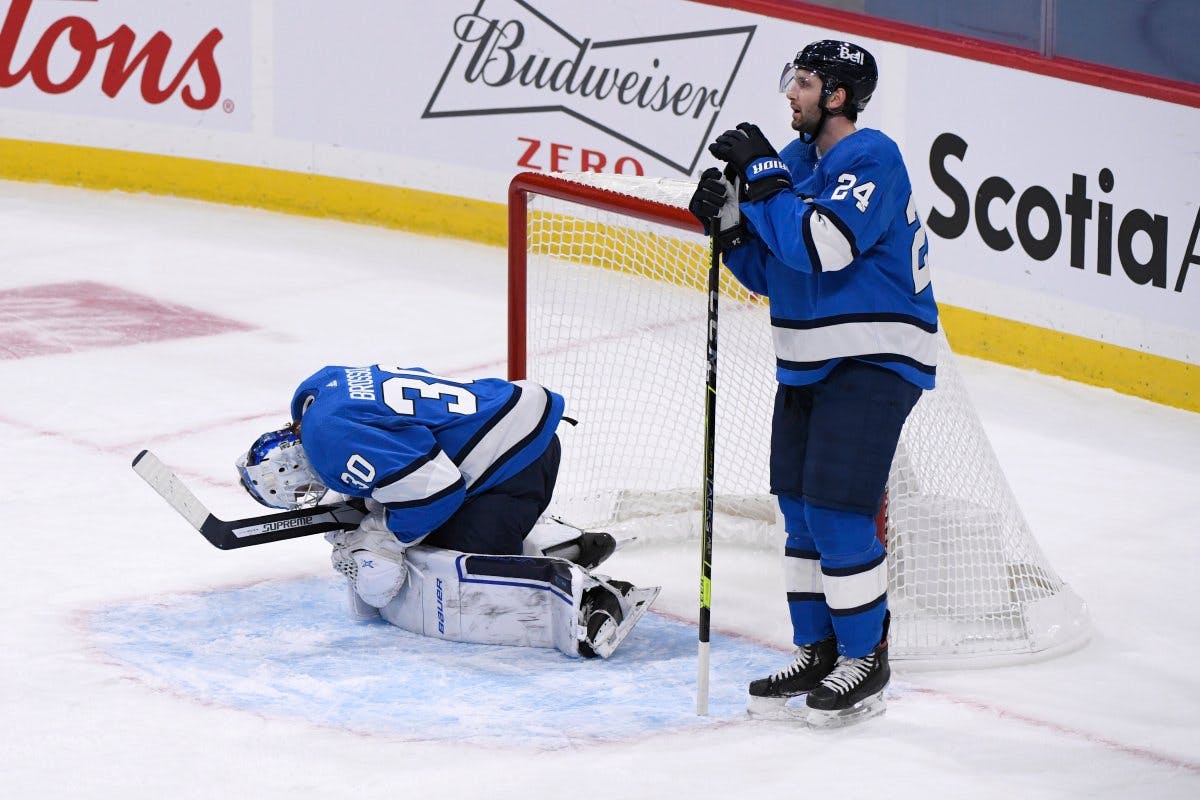 By Thomas Hall
1 year ago
Following a 4-3 overtime victory over the Montreal Canadiens, the Winnipeg Jets didn’t receive any time to rest and were forced to hit the road right after the game, leaving for Edmonton to begin a seven-game road trip that opened on Thursday night.
While the first period didn’t feature any scoring from either team, things opened up dramatically in the middle frame, resulting in a pair of goals from forward @Connor McDavid that provided the Oilers a 2-1 lead heading into the third period. Despite numerous scoring chances late in regulation, including one from forward @Mark Scheifele where the puck bounced just over his stick, the Jets failed to even the score before the final horn sounded and lost their 10th game of the season.
Here are three takeaways from the Jets’ 2-1 defeat against the Oilers:

While Winnipeg’s top-six forwards receive the most attention on a nightly basis, the club’s fourth line has been quietly productive so far this season and showcased another strong performance against Edmonton, as they served as one of the main sources of offense during this contest. Along with scoring the team’s lone goal, this group – featuring forwards @Mathieu Perreault, @Trevor Lewis and @Nate Thompson – produced the highest xGF rate (0.47) and finished tied with the most high-danger scoring chances (two) among all four lines.
Making an impact in the second period, Lewis created a turnover in the defensive zone and quickly passed the puck over to Thompson, who excited the zone and ultimately had his shot deflected by Perreault for the score. In addition to their offensive contributions, this trio also defended extremely well and only allowed one scoring chance during five-on-five situations, which is pretty impressive considering they were matched up against McDavid’s line several times.

Coming into this game, the Jets were focused on keeping the Oilers’ skaters to the perimeter and limiting their scoring chances in the middle of the ice, which is one of the best ways to slow down a high-powered offense. While they were largely effective in executing this gameplan, a couple of errors came back to bite them in this showdown as McDavid scored both of his goals off them.
Committing the first mistake early in the second period, defenseman @Josh Morrissey didn’t make a big enough effort to retrieve a dump-in along the boards, providing the young superstar an opportunity to score from the left faceoff circle. Later in the middle frame, veteran @Derek Forbort mistakenly pinched in the neutral zone and ultimately fell behind the play, allowing McDavid to create a two-on-one rush before netting his second goal of the game.

With Winnipeg playing on back-to-back nights, goaltender @Connor Hellebuyck, who faced 32 shots on Wednesday, received a well-deserved night off on Thursday and watched backup @Laurent Brossoit take on his former team for just the second time in his career. Despite allowing four goals on 38 shots against the Oilers back on Jan. 24, the 27-year-old didn’t endure nearly as much pressure this time around, as he only faced 21 shots through three periods.
Digging deeper into Brossoit’s light workload, the former sixth-round pick only faced three shots from high-danger areas and stopped each of them, although he did allow two goals from medium-danger areas. Having said that, the 6′ 3″ netminder still kept his team in the game during the third period, stopping all six scoring chances against him, and has now allowed two goals or fewer in five of his last six games.

The Jets will receive the day off on Friday and will be back in action against the Oilers on Saturday at 9 pm CT.
Uncategorized
Recent articles from Thomas Hall