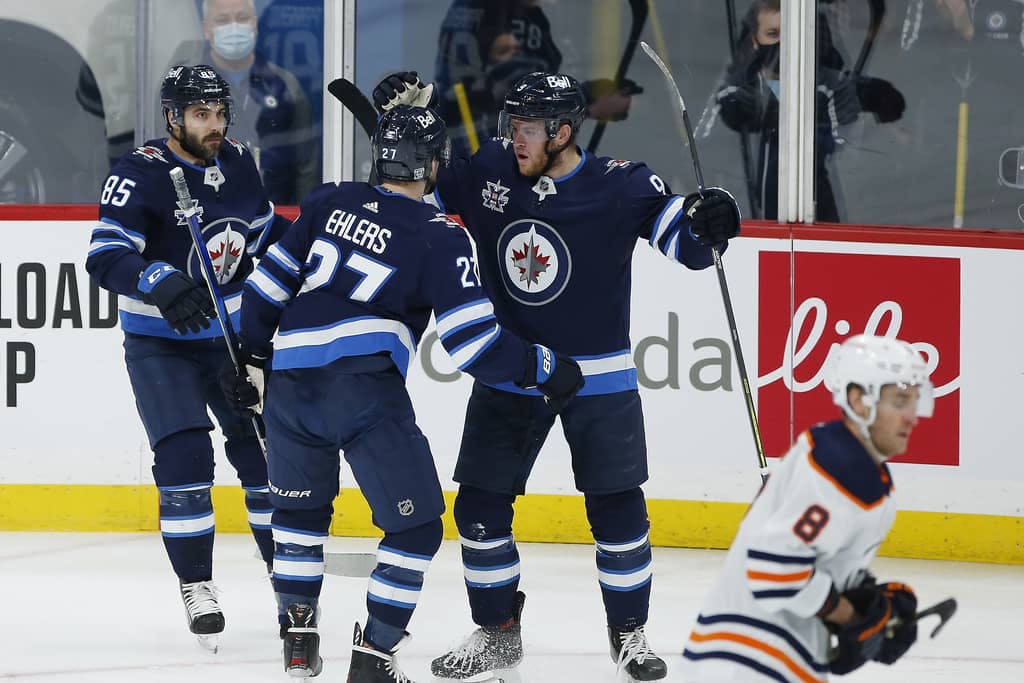 By Thomas Hall
1 year ago
Coming off a heartbreaking 4-3 loss on Sunday, the Winnipeg Jets were aiming to return to their winning ways, but they first needed to find a way to surge past the Edmonton Oilers on Tuesday night at Bell MTS Place.
Though things didn’t start well in the first period, as the Jets allowed three goals – including two powerplay goals – during the first 20 minutes, they rallied in the final frame to score three unanswered goals. Despite a late goal from captain @Connor McDavid, this team was still able to come away with a 6-4 win, improving their record to 5-2-0 through seven games.
Here are three takeaways from the Jets’ 6-4 victory against the Oilers:

While Winnipeg will be without forward @Pierre-Luc Dubois for another week and a half, they certainly haven’t lacked any depth beyond their top line, as the club’s second line has been unstoppable recently. With @Andrew Copp jumping up from the third line, most experts expected him to bring a defensive presence to his new linemates, although he’s also made a strong offensive impact and has helped teammates @Nikolaj Ehlers and @Paul Stastny produce more effectively.
Overall, this trio of skaters has produced 10 goals and 23 points over the last four games, including four goals and 10 points against the Oilers on Tuesday night. To top things off, this red-hot line took over the third period in the last game, as they nearly spent every single shift in the offensive zone and found the back of the net two different times as well.

Despite losing his longtime linemate (Copp), forward @Adam Lowry, who’s slated to become an unrestricted free agent next off-season, has continued performing effectively so far this season and has been making an impact at both ends of the rink. Carrying his two-way game into Tuesday’s showdown against Edmonton, the 27-year-old scored one goal, which proved to be the game-winner, three points and also helped maintain his team’s lead late in regulation.
With the Oilers pushing hard to claw back into the game, Lowry made it a priority to help clear the front of the net for goaltender @Connor Hellebuyck, which provided the 2019-20 Vezina Trophy winner with a clear view to make several key saves. Along with moving bodies out of high danger positions, the left-hander also blocked multiple passes in the defensive zone that easily could’ve led to scoring chances for his opponent.

3. Jets Unable to Stay Out of Penalty Box

Despite committing the third-fewest number of penalties (11) through the first three games of the season, staying out of the penalty box has been a difficult challenge for the Jets recently, as they’ve taken the fifth-most penalties (16) over the last four games, and that exact issue nearly prevented them from coming away victorious on Tuesday night. Charged with a pair of infractions in the opening period, the Oilers capitalized on both of their opportunities with the man advantage, allowing them to carry a one-goal lead into the second period.
Considering this team’s penalty kill currently owns the third-worst success rate (68.4%) in the league, they just can’t afford to continue taking unnecessary penalties and they’ll need to find a way to become more disciplined moving forward.

The Jets will be off for the next three days – everyone better rest up – and are scheduled to take on the Vancouver Canucks on Saturday at 9 pm CT.
Uncategorized
Recent articles from Thomas Hall