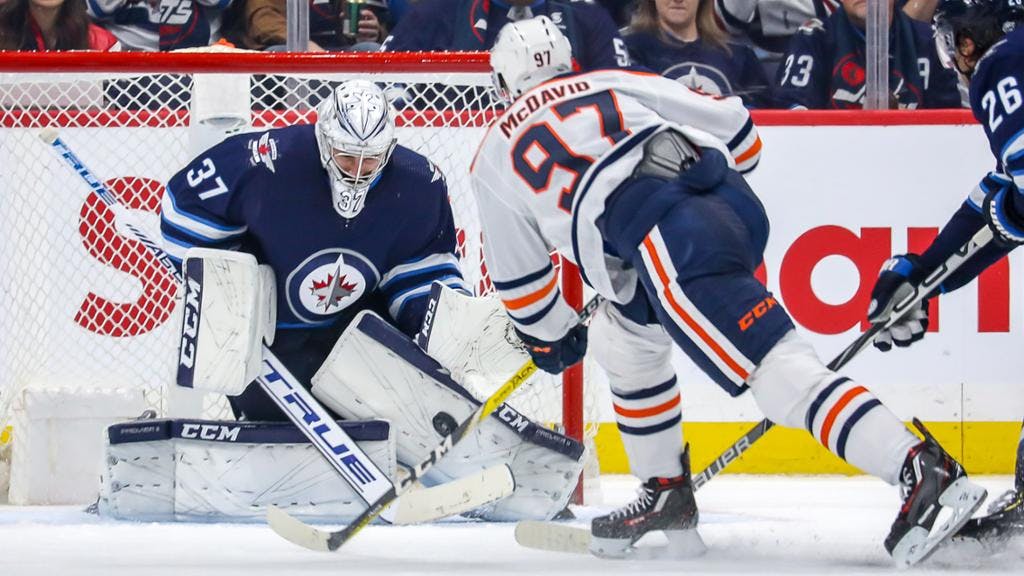 By Thomas Hall
1 year ago
After splitting the two-game series against the Edmonton Oilers last month, the Winnipeg Jets defeated them for a second time this season on Monday and are now looking to capture back-to-back wins against this team, which would also extend their current winning streak to two games.
Coming off a thrilling 6-5 victory, the Jets have now passed the Oilers for third place in the North division, yes, it’s probably still a little early to be looking at the standings, but that’s what happens during a 56-game season. Speaking of the division standings, with a win on Wednesday night and a loss from the Montreal Canadiens, this club would advance into second place and would also be a few points back of the Toronto Maple Leafs for first place.
With just over 25 percent of the 2020-21 campaign completed, it’s safe to say Winnipeg is currently in a strong position to compete for the playoffs this season. Let’s hope it stays that way.
Here are three storylines that could impact the Jets’ fourth game of the season against the Oilers:

Thanks to a lower-body injury that popped up after the game on Feb. 11, forward @Pierre-Luc Dubois has been held out of the lineup over the last two games and the 22-year-old is now set to miss his third straight contest on Wednesday night. Since the 6′ 3″ center has already missed so much time in 2021, as he’s only played two games with his new team so far, coach Paul Maurice and his staff are being extremely cautious with the youngster’s health in hopes of having him back on the ice throughout the remainder of the season.
In Dubois’ absence, teammate @Paul Stastny will continue serving as the club’s second-line center and will be joined by forwards @Kyle Connor and @Nikolaj Ehlers, who combined for two goals and three points on Monday night. Unless this group struggles to perform effectively, it seems the top-six forwards may remain the same until the former Columbus Blue Jacket returns to action, whenever that actually happens.

Considering Winnipeg and Edmonton both scored three goals in the second period on Monday, it’s certainly possible this showdown could feature the same amount of intensity during the middle frame, especially if each of these teams struggles to perform effectively in the defensive zone once again. With a combined 28 shots on net and five high-danger scoring chances in the second period of last game, Wednesday’s rematch could be decided before the third period begins if these high-powered results return.
Taking into account that the Oilers are currently tied for the third-most wins (seven) when carrying a lead into the third period, it’ll be extremely important for the Jets to keep the puck out of their own net during the first 40 minutes of this game. But since they’re tied for the third-most goals (20) in the middle frame, the majority of the second period could be spent in the offensive zone, which may help them control the scoreboard heading into the final 20 minutes of play.

With limited days in between games during the 2020-21 campaign, most teams across the entire league have been leaning on two different goaltenders through the first quarter of the season, although the same can’t be said about the Jets. While not all 31 teams are lucky enough to have a Vezina Trophy winner between the pipes, goaltender @Connor Hellebuyck has been extremely busy this month, as he’s started in six of the seven games and is slated to make his sixth straight start – his seventh of February – on Wednesday.
After facing a season-high 45 shots – including 22 shots in the second period – on Monday, it would’ve made plenty of sense to give Hellebuyck the night off during this rematch against the Oilers. Nevertheless, the 27-year-old netminder will be making his 13th start of the campaign and will be aiming to capture his eighth victory on the year, which would tie him for second-most wins among all goaltenders in the league.

The puck will drop at 9 pm CT, make sure to rest up, and will be available on TSN 3 along with 680 CJOB.
Uncategorized
Recent articles from Thomas Hall