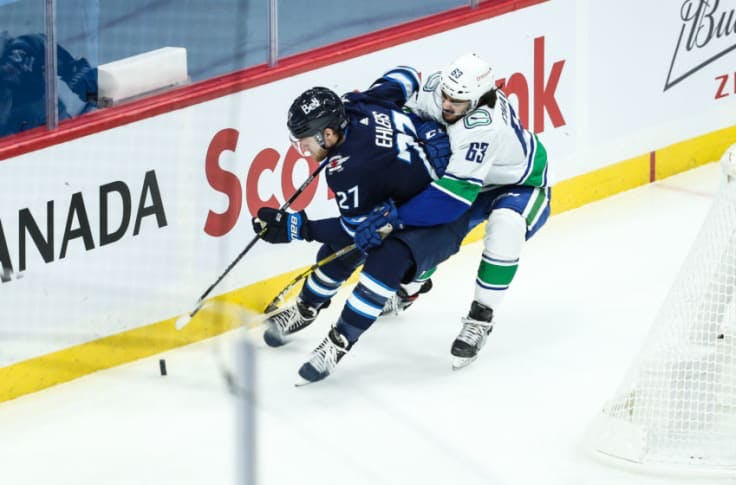 By Thomas Hall
1 year ago
After ending a two-game losing streak Monday night, the Winnipeg Jets are now looking to capture consecutive wins over the Vancouver Canucks, which would allow them to win the season series against this opponent.
Along with earning their fifth victory of the season against Vancouver, a win on Wednesday would also move Winnipeg into a virtual three-way tie for first place in the North Division. While there’s still plenty of games left to play, keeping pace with the Toronto Maple Leafs and the Edmonton Oilers would certainly be an ideal situation, especially since the Jets are scheduled to face off against each of them several times next month.
Here are three storylines that could impact the Jets’ seventh game of the season against the Canucks:

While the Jets have struggled to alleviate pressure on their netminders so far this season, as they’re currently tied for allowing the eighth-most shots on net (31.3) per game, they corrected that issue during the first game against the Canucks by limiting them to just 22 shots. Along with clogging up their shooting lanes, this team also did an excellent job at keeping their opponent out of the middle of the ice, resulting in just five high-danger scoring chances allowed.

Source: NaturalStatTrick.com
Though Vancouver will surely be adjusting their gameplan Wednesday, it’ll be extremely important for Winnipeg to replicate these impressive results through all three periods of this contest or they’ll likely spend an increased amount of time in their own zone. At that point, it could become very difficult to keep their skaters out on the perimeter, ultimately forcing goaltender @Connor Hellebuyck to keep his team in the game with numerous key saves.

With forward @Pierre-Luc Dubois centering the Jets’ second line, the 22-year-old has created plenty of chemistry with linemates @Kyle Connor and @Nikolaj Ehlers since joining their group, although this trio endured an extremely frustrating matchup Monday night. Despite leading the team in shots on net (nine), xGF (0.37), scoring chances (10) and high-danger scoring chances (three), they couldn’t sneak a single goal past goaltender @Thatcher Demko.
In particular, Ehlers led this group with five shots on net (team-high), six scoring chances, two high-danger scoring chances and a 0.43 xG rate during five-on-five situations. Considering the Canucks mainly neutralized his lightning-fast quickness, the 25-year-old will definitely be looking to create additional space for himself and his teammates during this showdown at Rogers Arena.

Since Winnipeg is currently on a seven-game road trip and is also scheduled to play five games in eight nights through the end of March, avoiding any fatigue has already been an extremely difficult task during this condensed schedule and accomplishing that feat is likely to become even tougher moving forward. Luckily, Hellebuyck received somewhat of a night off Monday as he only faced 22 shots, his lowest shot total since Feb. 25, with just two of those shots coming from high-danger areas.
Digging deeper into this quiet outing, Vancouver produced just seven shots on net and six scoring chances in the final 20 minutes of this contest, providing the 27-year-old netminder a stress-free third period. As a result, this added rest could help Hellebuyck enjoy shutdown performances in back-to-back games, making their skaters extremely frustrated all game long.

The puck will drop at 9:30 pm CT, make sure to rest up for this one, and will be available on TSN 3 along with 680 CJOB.
Uncategorized
Recent articles from Thomas Hall