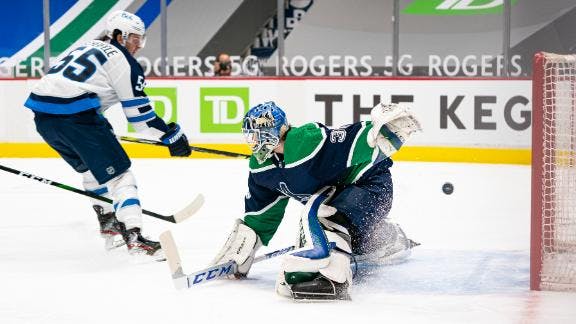 By Thomas Hall
1 year ago
While Friday night’s game against the Vancouver Canucks featured plenty of scoring chances, the Winnipeg Jets somehow came away with a 2-0 victory, earning goaltender @Laurent Brossoit his second career shutout, and they’re now looking to capture a second straight win against this opponent.
Before heading home, the Jets will first need to finish this two-game series against the Canucks, which could prove to be a very entertaining showdown once again. Then just one week later, these two teams will meet once again for a back-to-back series at Bell MTS Place.
So everyone better get used to playing against Vancouver over the next week or so…
Here are three storylines that could impact the Jets’ third game of the season against the Canucks:

The time has finally come, forward @Pierre-Luc Dubois will return to the Jets’ lineup on Sunday night after missing the last four games due to a lower-body injury. Following the club’s morning skate, the 22-year-old revealed that he was dealing with a “muscle injury” but is now ready to play his first game since Feb. 11.
In an effort to limit his workload, Dubois has temporarily been moved to the wing and will now skate alongside teammates @Mark Scheifele and @Blake Wheeler on the top line. In addition, coach Paul Maurice will also likely limit the left-hander’s minutes during his return, meaning he might receive just 13-15 minutes of ice time against the Canucks.

2. Blake Wheeler Starting to Break Out of Early Season Woes

Despite scoring five goals and 14 points through 17 games this season, Wheeler has earned a -10 +/- rating and has largely been criticized for his poor showing in the defensive zone. Adding to his early-season defensive struggles, the 34-year-old hasn’t looked healthy up to this point, however, he hasn’t openly admitted about playing through any significant injury.
Having said that, Wheeler has recently stated his body has been feeling much healthier lately and his improved health definitely played a factor in his encouraging performance on Friday, as he displayed a new level of quickness and also produced five scoring chances, four high-danger scoring chances (team-high) and a 0.48 xG during his 19:09 minutes of ice time. Considering he’ll receive three off days after this Sunday affair, it’s possible the 6′ 5″ forward will be able to fully recover from whatever ailment he’s been dealing with, which could spark a mid-season turnaround.

3. Jansen Harkins Comes Out of Lineup

With Dubois returning to action, the Jets have decided to remove forward @Jansen Harkins from the lineup, meaning teammate @Nate Thompson will remain at center and will skate alongside @Trevor Lewis and @Mathieu Perreault on the fourth line. But considering Thompson earned less than seven minutes of ice time on Friday and also didn’t spend any of those minutes on the penalty kill, keeping him in the lineup is a very interesting decision.
While Harkins is pointless through 12 games this season, the 23-year-old has generated a 56.3% faceoff percentage and has also provided a jolt to his line at times, resulting in four scoring chances and a 0.48 xG during five-on-five situations. So if the club’s fourth line lacks that same level of energy on Sunday, it’ll be clear that Maurice probably should’ve kept the youngster in the lineup.

The puck will drop at 9 pm CT, make sure to rest up, and will be available on TSN 3 along with 680 CJOB.
Uncategorized
Recent articles from Thomas Hall