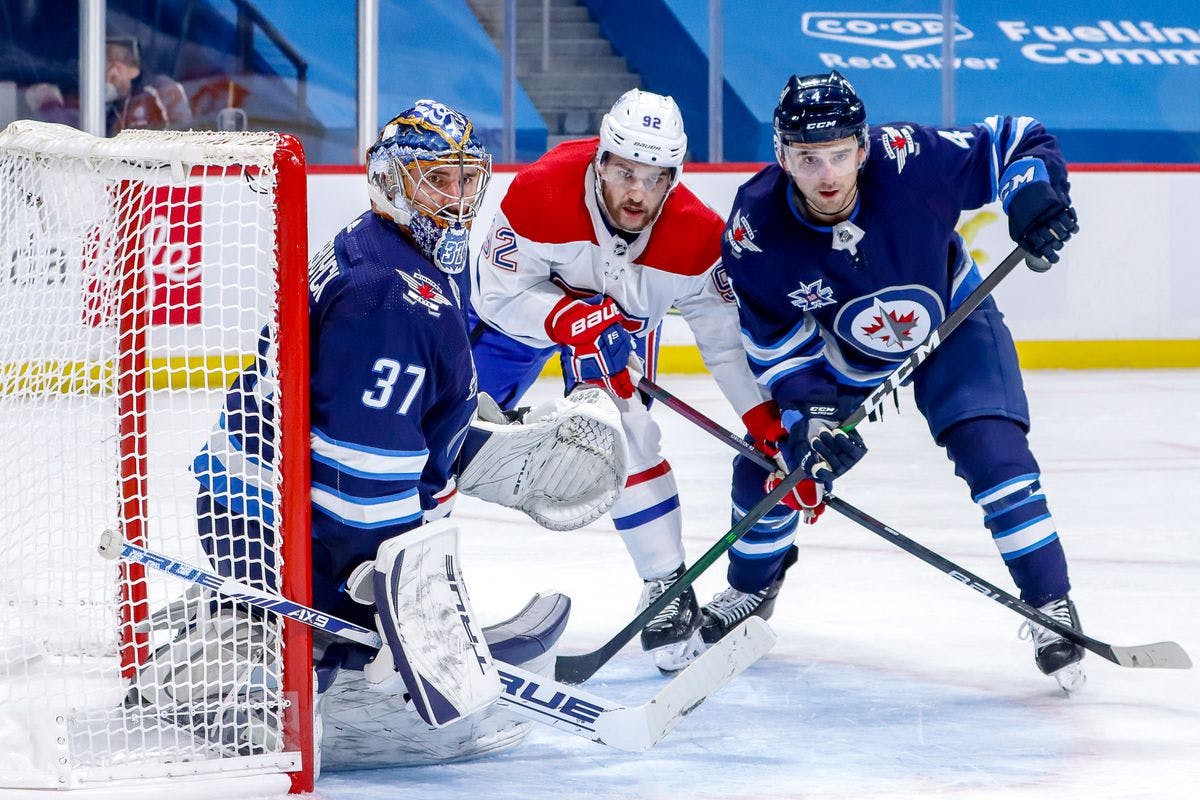 By Thomas Hall
1 year ago
Coming off a sloppy 4-2 defeat on Monday, the Winnipeg Jets are aiming to get back on track during this second straight matchup against the Montreal Canadiens, which would allow them to avoid losing back-to-back games for the eighth time this season.
Through 28 games in 2021, Winnipeg currently owns a 7-0-1 record in games after a loss, meaning there’s a very strong chance they’ll come out firing on all cylinders on Tuesday night. But considering Montreal has beaten them in each of the last two meetings, coming away victorious probably won’t be an easy task to accomplish, especially if they replicate their miscues from last game.
Here are three storylines that could impact the Jets’ sixth game of the season against the Canadiens:

1. Jets Looking to Cut Down on Unforced Errors

Nothing makes a head coach more upset than when his team struggles to play clean and smart with the puck, unfortunately, that’s exactly what the Jets have done so far this season as they’ve committed the eighth-most giveaways (273) among all 31 teams in the league. Reaching a new low point on Monday, these exact issues were directly responsible for three of the four goals allowed against Montreal, which ultimately cost this club the game.
Along with the turnovers that resulted in scoring opportunities, there was also a handful of instances where the Jets’ skaters had their pockets picked because they held onto the puck for too long and weren’t paying enough attention to their surroundings. If every player on the roster doesn’t make it a priority to reduce these miscues on Wednesday, then this contest could prove to be extremely frustrating for everyone involved, including the fans who are forced to watch at home.

Unlike previous seasons, the Jets’ level of physicality has dropped off significantly during the 2020-21 campaign, ranking them tied for the 10th-fewest number of hits (588) in the NHL. Having said that, this team has started turning things around in that department recently as they’ve created 94 hits over the last three games, which is tied for the third-most in the league since Mar. 11.
In particular, defenseman @Neal Pionk, who currently leads the team in hits, hasn’t shied away from throwing his body around during this three-game stretch and is tied for the second-most hits (19) among all skaters in the league. Making the most of his limited playing time, veteran @Nate Thompson has only received 8:06 minutes of ice time per game since Mar. 11, but has generated seven of his 17 hits on the season over the past three games.

Despite being loaded with superstar talent, Winnipeg’s second line hasn’t exactly played up to their high expectations just yet and some experts have started to wonder whether the trio of @Kyle Connor, @Pierre-Luc Dubois and @Nikolaj Ehlers would be broken up in the near future. Even though Dubois has only registered one assist over the last five games, coach Paul Maurice confirmed to the media that he isn’t planning to shuffle his second line, at least for now.
But considering this group only generated one high-danger scoring chance and a 0.35 xGF rate against Montreal on Monday, it’d be extremely beneficial for them to create a lot more havoc in the offensive zone during this rematch against them. While it appears this trio is temporarily safe, there’s no question Maurice will need to shake things up among his top-six forwards if this second line fails to string together consistent production moving forward.

The puck will drop at 8 pm CT, not sure why this game needs to start an hour later… and will be available on TSN 3 along with 680 CJOB.
Uncategorized
Recent articles from Thomas Hall