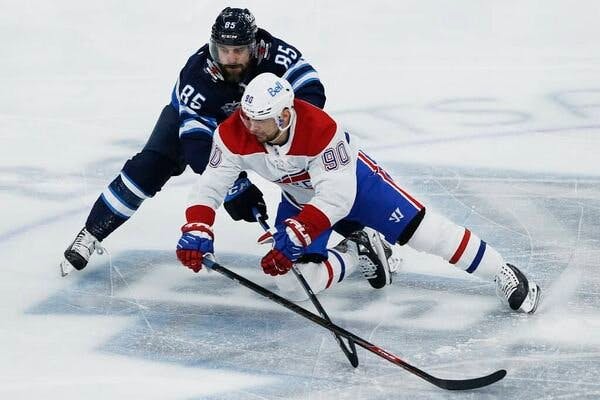 By Thomas Hall
1 year ago
Coming off a thrilling 4-3 overtime victory against the Montreal Canadiens, the Winnipeg Jets are now slated to take on this same pesky team on Saturday night and are hoping for a similar outcome, perhaps one that can be settled in regulation this time around.
Considering two of the first three matchups between these two organizations have extended beyond the third period this season, ending this showdown before the end of regulation will probably be a priority for each side. But from the fanbase’s perspective, it wouldn’t be the worst thing in the world for this game to stretch into overtime, especially since Winnipeg is now utilizing three forwards in the extra frame.
Here are three storylines that could impact the Jets’ fourth game of the season against the Canadiens:

While defenseman @Josh Morrissey isn’t considered one of the top offensive blueliners in the league, he’s still served as a reliable scoring threat on the Jets’ blue line over the last few seasons, although he’s currently struggling in that department. So far this season, the 25-year-old has only produced nine points, 27 scoring chances, a 1.84 xG (lowest since his rookie season) and is currently riding a seven-game pointless streak.
In addition to his offensive struggles, Morrissey also hasn’t drawn a single penalty in 2021 and that’s something he’s been effective at in the past, as he’s drawn at least six penalties in each of the last four seasons. But since the former first-round pick has only registered one career point in nine games against the Canadiens, there’s a chance this tough stretch may last a little bit longer for the left-handed defenseman.

Despite being placed on waivers before the regular season opened, forward @Mathieu Perreault hasn’t allowed that unfortunate occurrence to derail his seventh season with the Jets and has enjoyed a strong start to the 2020-21 campaign, resulting in five goals and 10 points through 23 games. Thanks to his determination, the 33-year-old has an opportunity to etch his name in the history books on Saturday, as he could become the 13th player from the 2006 NHL Draft to record at least 200 career assists.
Taking this milestone even further, no skater who was selected beyond the third round in 2006 has ever accomplished this feat, at least for now. But once Perreault records his sixth assist of the season, he’ll become the first player to accomplish that mark, which would be a major achievement for someone who was drafted in the sixth round and has been forced to grind for everything in his career.

Though Winnipeg has been considered one of the more physical teams in the league over the last few seasons, they haven’t played that style of hockey so far this season as they currently own the 10th-fewest number of hits (445) among all 31 teams. As a result, this club has struggled to enforce its will through the first half of the 2020-21 campaign, which has allowed Montreal to dominate in the hits department through three games.
In three meetings against the Canadiens, they’ve outhit the Jets 87-54 and have been led by forwards @Joel Armia, @Nick Suzuki and @Jonathan Drouin, who’ve each registered at least seven hits during this season series. But considering defenseman @Nathan Beaulieu currently sits third on the team in hits (38) and has only produced two hits in this season series, the coaching staff will likely be counting on him to utilize his 6-foot-2 frame and add some much-needed physicality to this contest.

The puck will drop at 6 pm CT and will be available on City TV/SN along with 680 CJOB.
Uncategorized
Recent articles from Thomas Hall