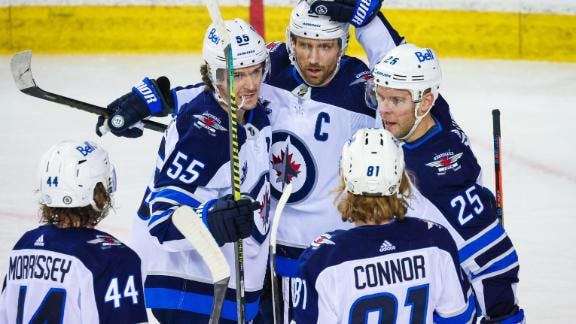 By Thomas Hall
1 year ago
After splitting the first two games of this three-game series over the weekend, the Winnipeg Jets are looking to capture their fifth win of the season against the Calgary Flames, which would earn them a season-series victory.
Even though Winnipeg lost 4-2 against Calgary on Sunday, the condensed schedule clearly played a major factor in their losing performance, meaning there isn’t much to take away from this contest. Having said that, it’s become extremely important to provide each skater with as much rest as needed during off days, especially since this team will only receive one day off between games from now until Apr. 18.
Here are three storylines that could impact the Jets’ eighth game of the season against the Flames:

While Winnipeg has scored a combined five goals over the last two games, the top line of @Blake Wheeler, @Mark Scheifele and @Paul Stastny didn’t produce a single goal and allowed a pair of them during five-on-five situations over the weekend. To make matters worse, they finished with the lowest xGF percentage (43.38%) Saturday along with the second-lowest xGF percentage (17.67%) Sunday among all four lines, according to NaturalStatTrick.com.
Considering this trio has allowed 14 shots on net and eight high-danger scoring chances in these two games against Calgary, it’ll be extremely important for them to dramatically improve in both the offensive and defensive zones Monday night. But since the club’s top line has struggled to perform effectively in their zone so far this season, changing that narrative during this showdown may prove to be very challenging, which could put a ton of pressure on goaltender @Connor Hellebuyck once again.

Despite playing six consecutive road games – including a back-to-back series – the Jets haven’t decided to make any lineup changes and have used the same 18 skaters in each of the last 10 games, which will extend to 11 contests Monday. Taking this a step further, this team has only utilized 20 skaters since Feb. 21, with 16 of them playing in all 18 games, according to Winnipeg’s PR Team.
As a result of this heavy workload, players like @Sami Niku – last played on Mar. 1 – and @Jansen Harkins – last played on Feb. 19 – haven’t received much playing time over the last month and a half, which is less than ideal. But with coach Paul Maurice pleased with his current lineup, it’s unclear as to when either of these skaters will return to action, meaning they’ll both need to continue working hard on and off the ice in the meantime.

3. Can’t Fall Behind By Two Goals

Performing under pressure, the Jets currently own the most-wins when trailing after the first period (seven) and are tied for the most wins when trailing after the second period (four), according to NHL.com. Adding to this, they’ve performed to a 10-5-2 record in one-goal games and own a 9-3 record during games decided by three goals or more.
Despite these impressive showings, Winnipeg hasn’t performed nearly as well during two-goal games this season, as they own a 2-4 record in those situations with three of those defeats occurring earlier this month. With this in mind, it’d be very beneficial for this team to avoid falling behind by two goals Monday night or coming away victorious could prove to be unattainable.

The puck will drop at 9 pm CT, yes, we’re almost finished with these late start times, and will be available on TSN 3 along with 680 CJOB.
Uncategorized
Recent articles from Thomas Hall