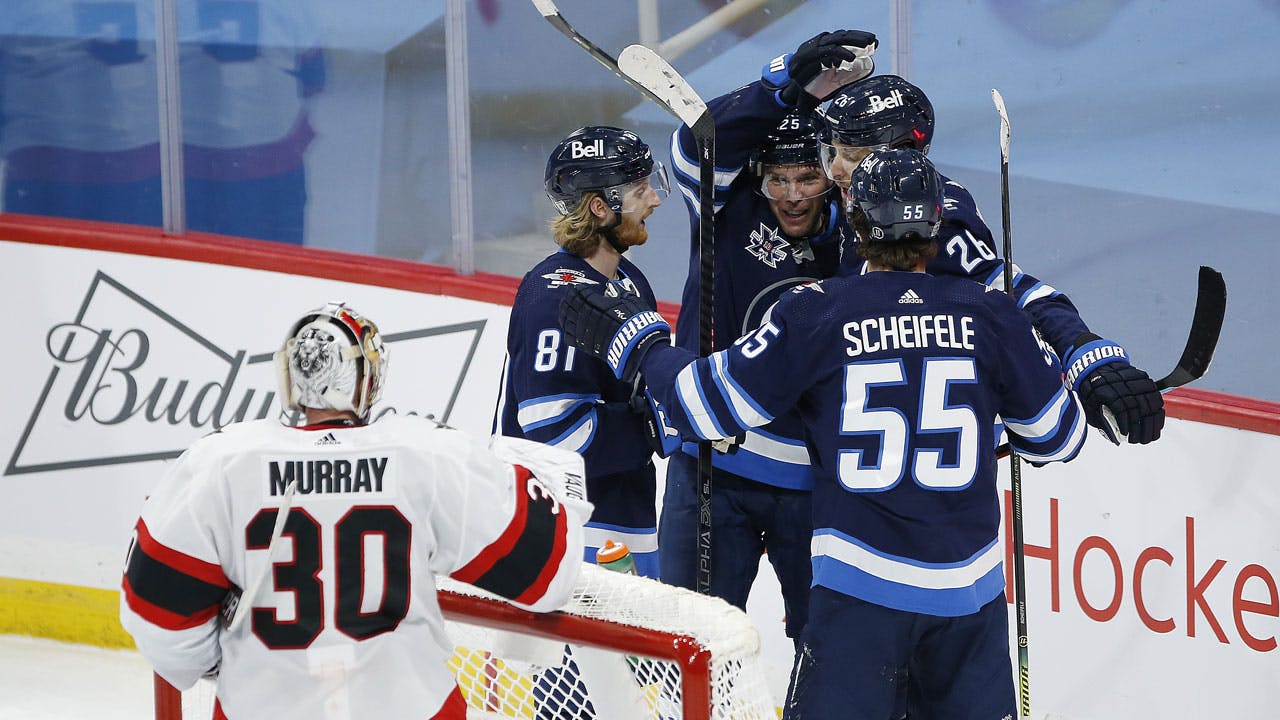 By Thomas Hall
1 year ago
Following a dominating 5-0 victory over the Montreal Canadiens, the Winnipeg Jets have continued on their five-game road trip, crossing the border into Ontario and are now scheduled to play a two-game series against the Ottawa Senators.
With the trade deadline come and gone, Winnipeg can solely focus on moving forward towards the playoffs and attempting to capture first place in the North Division. While almost everyone would’ve liked to see general manager Kevin Cheveldayoff acquire a top-four defenseman, that type of move didn’t come to fruition and all of us will need to just move forward with the skaters who’re currently on the roster.
Here are three storylines that could impact the Jets’ seventh game of the season against the Senators:

While it initially appeared like Winnipeg wasn’t going to make a trade before the deadline, management beat the buzzer this year as they acquired defenseman @Jordie Benn from the Vancouver Canucks in exchange for a sixth-round pick. Though the 33-year-old isn’t the big-name skater the fanbase was hoping for, he’s still someone who can provide some depth on the backend and has the ability to take away some shooting lanes in the defensive zone, as he’s created 46 blocks in 31 games this season.
As for where Benn will be positioned, he’s a left-handed shooter that can play on both sides and will probably spend the majority of his time on the third defensive pairing. If coach Paul Maurice wants to provide veteran @Tucker Poolman a night off, teammate @Dylan DeMelo could jump up to play with @Josh Morrissey, potentially allowing Benn to skate alongside rookie @Logan Stanley.

Despite playing alongside multiple different skaters this season, forward @Mark Scheifele has remained one of the top offensive contributions for Winnipeg, as he’s currently tied for the fifth-most assists (32) and also owns the sixth-most points (47) among all skaters in the league, according to NHL.com. Stepping up his play recently, the 28-year-old has produced three goals and 10 points over his last 10 games, including one assist in each of his last three games.
Thanks to Scheifele’s stellar performance, the former first-round selection is currently on pace to record 94 points over an 82-game schedule, which would surpass his previous career-high of 84 points from the 2018-19 campaign. Considering the 6′ 3″ center has posted three goals and 11 points in six games against Ottawa this season, chances are he’ll continue producing at a high level over these next two games.

Playing in a top-four role on the Jets’ blue line, defenseman @Derek Forbort has proven to be a quality addition while skating alongside teammate @Neal Pionk, adding a much-needed defensive-minded presence on the club’s second defensive pairing. Clogging up shooting lanes in the defensive zone, the 29-year-old blueliner currently ranks third in blocks (90) among all defensemen in the league, according to NHL.com, and has tallied at least one block in nine of the last 11 games.
Adding to Forbort’s defensive presence, the 6′ 4″ defenseman netted his second goal of the season Saturday against the Canadiens, which has tied his career-high in goals. Since the front office didn’t land a top-four blueliner at the trade deadline, the former first-round pick should continue receiving around 20:00 minutes of ice time per game, keeping him on the same pairing as Pionk.