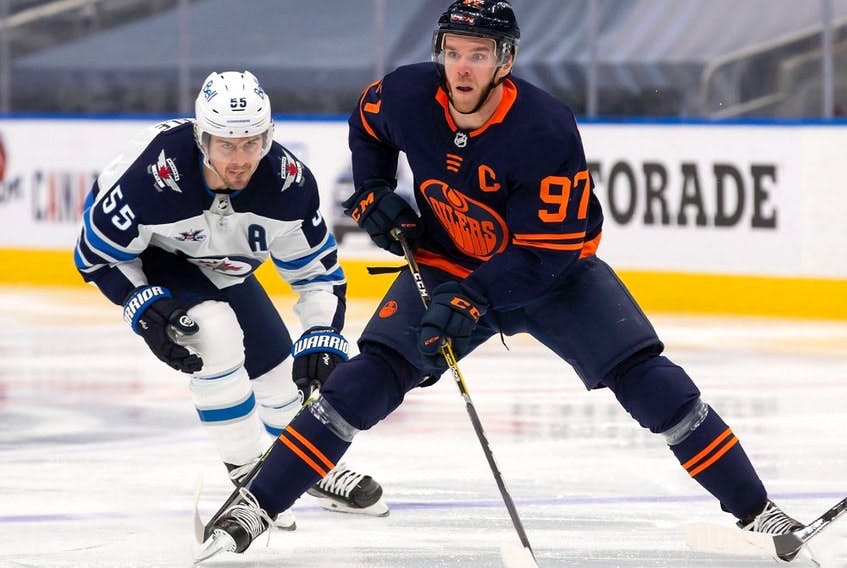 By Thomas Hall
1 year ago
Coming off consecutive losses against the Toronto Maple Leafs, the Winnipeg Jets are currently riding a three-game losing streak, which is their longest of the season, and are aiming to get back on track during the first of two-straight meetings against the Edmonton Oilers.
Though Winnipeg is determined to battle through this recent winless stretch, it could be extremely challenging to accomplish that feat against Edmonton’s high-powered offense, especially since this club is facing a ton of adversity right now. With two key forwards out of the lineup, goaltender @Connor Hellebuyck and center @Mark Scheifele publicly arguing with coach Paul Maurice, it’s probably safe to say this could be one of the most crucial stretches of the 2020-21 campaign.
Here are three storylines that could impact the Jets’ eighth game of the season against the Oilers:

After missing Saturday’s game due to a head injury, forward @Adam Lowry skated in a non-contact jersey during Monday’s practice and will be held out of the lineup once again as a precaution. While Lowry is expected to return to action in the near future, teammate @Nikolaj Ehlers won’t be suiting up anytime soon, as he suffered a season-ending shoulder injury last game against the Maple Leafs and likely won’t return until at least the playoffs begin.
With both Lowry and Ehlers unavailable Monday, the coaching staff has been forced to shake up the forward lines, moving @Andrew Copp and @Mason Appleton up to the top line with Scheifele. The club’s newly-formed second line now features @Kyle Connor, @Pierre-Luc Dubois and @Blake Wheeler. As for the third line, veteran @Paul Stastny returns to center alongside @Mathieu Perreault and @Kristian Vesalainen, who hasn’t played since Feb. 17.

Considering Scheifele has been on the ice for a team-high 39 goals allowed during five-on-five play so far this season, there’s no question he’s struggled with the defensive aspect of his game and that’s something Maurice tried to hold him accountable for on Saturday night. Playing four-on-four hockey almost midway through the second period, the 28-year-old casually skated back to the bench following a turnover in the offensive zone, ultimately allowing the Maple Leafs to create a two-on-one rush that led to a goal for captain @John Tavares.
Needing to send a message for Scheifele’s lack of effort, the right-hander was benched for the remainder of the period and was visibly upset about that decision postgame, especially since his team was trailing by two goals at the time. Since the Oilers are coming to Bell MTS Place for a two-game series, it’ll be extremely important for the former first-round pick to put this incident behind him and focus on performing effectively at both ends of the rink moving forward.

Following a disappointing debut in the first half of the two-game series against Toronto, which earned him a -2 rating, defenseman @Jordie Benn will receive another opportunity to showcase his skills Monday night against Edmonton. Returning to Winnipeg’s third defensive pairing, the 33-year-old will skate alongside veteran @Dylan DeMelo once again and this duo will be aiming to improve their relationship during their second game together as linemates.
Since Benn and DeMelo were seen playing out of position multiple times back on Apr. 22, it’ll be very important for both of them to correct this issue against the Oilers, especially when there’s a skater located in front of the net. If they fail to achieve this goal, then it might be another frustrating game for Hellebuyck, who’s been left out to dry numerous times over the last few contests.

The puck will drop at 8 pm CT and be available on TSN 3 along with 680 CJOB.
Uncategorized
Recent articles from Thomas Hall