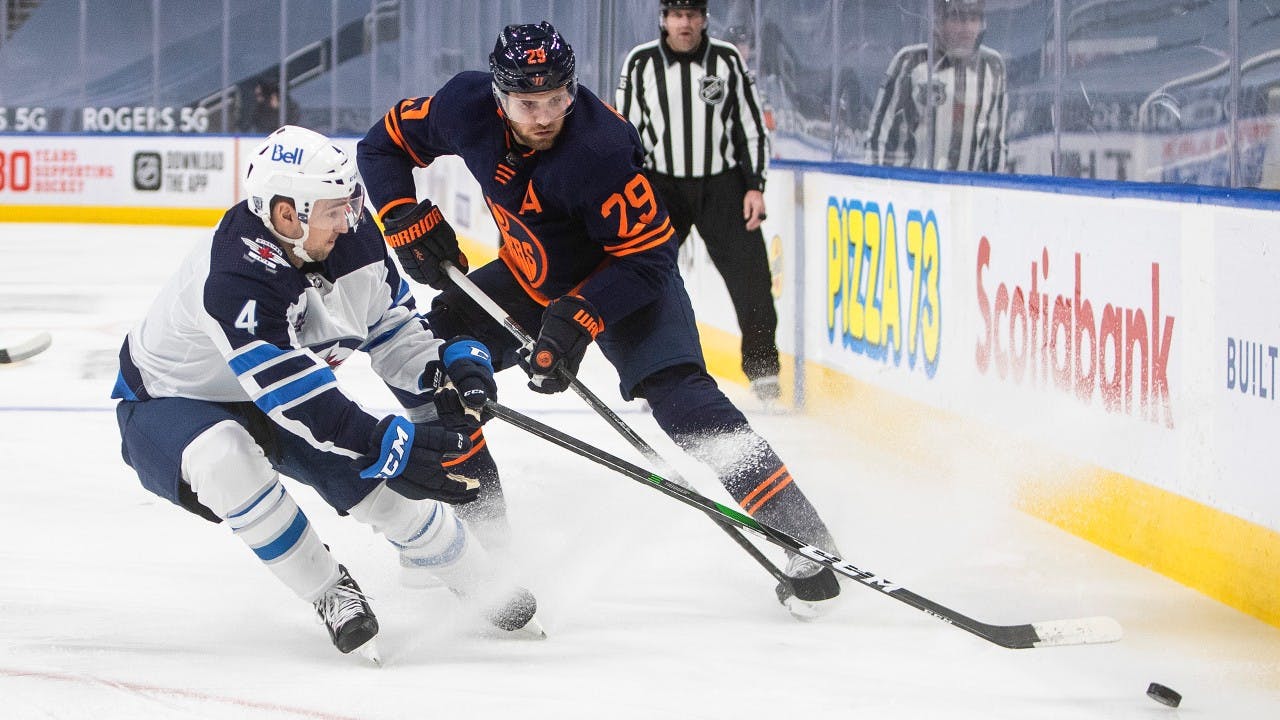 By Thomas Hall
1 year ago
Following a successful back-to-back series against the Ottawa Senators and Toronto Maple Leafs, the Winnipeg Jets were finally allowed to travel home and will now begin a five-game homestand, starting against the Edmonton Oilers Saturday night.
It might be difficult to believe, but the last time Winnipeg defeat Edmonton was back on Feb. 15, yes, that’s over two months ago. With that in mind, there’s no question this team is determined to come away victorious this time around, especially since a victory would position them just one point back of Toronto for first place in the North Division.
Here are three storylines that could impact the Jets’ seventh game of the season against the Oilers:

Since coach Paul Maurice was unpleased with defenseman @Logan Stanley’s performance against the Senators, he decided to make the rookie blueliner a healthy scratch during the second half of the back-to-back series, allowing teammate @Ville Heinola to slide into the lineup alongside veteran @Dylan DeMelo on the third defensive pairing. But since the 20-year-old struggled at times against the Maple Leafs, the coaching staff has chosen to reinsert Stanley into the lineup ahead of Saturday night’s contest.
Appearing in his first season in the NHL, the 22-year-old has steadily progressed ever since making his debut on Jan. 18, posting one goal, four points and 48 shots on net through 31 games, and will need to continue improving in order to receive consistent playing time moving forward. As for how this spot will be utilized the rest of the way, Maurice plans to use a rotation of players, including @Jordie Benn, Heinola and Stanley, and platoon them through the remainder of the regular season.

2. Focusing on Staying Out of Penalty Box

Considering the Oilers feature one of the most lethal power plays in the league, which is currently tied for the second-highest conversion rate (26.7%) this season, it’ll be extremely important for the Jets to stay out of trouble throughout this game. Having said that, this team has failed to remain disciplined recently, as they’re tied for committing the eighth-most penalties (28) among all 31 teams in the league since Apr. 1.
Despite taking a ton of penalties this month, Winnipeg’s penalty killers have performed extremely well during that span, producing the seventh-highest success rate (87.0) since the start of April. While this club can probably survive taking a few infractions against Edmonton, playing with fire is never a smart idea, especially when you’re facing off against a team that features @Connor McDavid and @Leon Draisaitl.

After producing a career-high 39 assists during his inaugural campaign with the Jets, defenseman @Neal Pionk has elevated his game even higher this season and has become a crucial part of the club’s backend, as he leads all defensemen in assists (26) and points (29). Entering Saturday’s game on a five-game point streak, the 25-year-old has generated five assists over his last five games, two of which have come on the power play.
Along with being one point away from registering 30 points for a second consecutive season, Pionk is also on pace to record career-highs in assists (48) and points (54) over an 82-game schedule. Considering the undrafted free agent was unknown to most of the fanbase when he was acquired prior to last season, being on pace to surpass the 50-point threshold in 2021 is likely something almost no one believed he could ever accomplish, making this season’s performance truly remarkable.

The puck will drop at 6 pm CT, yes, this game will receive national exposure, and will be available on CBC/SN along with 680 CJOB.
Uncategorized
Recent articles from Thomas Hall