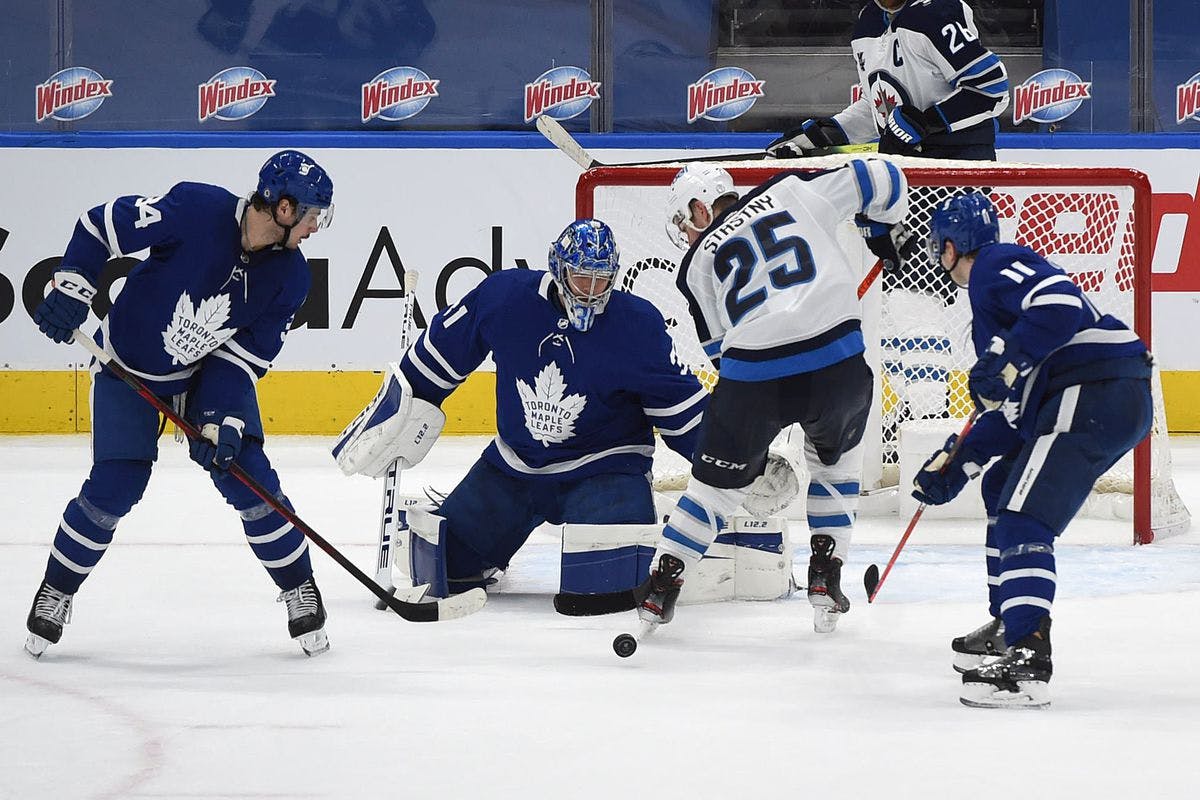 By Thomas Hall
1 year ago
Coming off a dominating 5-1 victory over the Calgary Flames, the Winnipeg Jets finally traveled home after finishing a seven-game road trip and they’ll now face off against the North Division-leading Toronto Maple Leafs Wednesday night.
With six games remaining against Toronto – including Wednesday’s contest – there’ll likely be a ton of shuffling at the top of the standings in the north from now until the end of the regular season, especially since these two teams are currently separated by just one point. But considering Winnipeg owns a 2-1-1 record against them in 2021, not to mention they’ve also won four of their last five games, chances are they’ll end up winning this season series against one of the top teams in the league.
Here are three storylines that could impact the Jets’ fifth game of the season against the Maple Leafs:

In a surprising move Monday, coach Paul Maurice decided to shake up the top six forwards early in the game, swapping forwards @Pierre-Luc Dubois and @Mark Scheifele. Proving to be an extremely rewarding decision, this newly formed second line that features @Kyle Connor, @Nikolaj Ehlers and Scheifele generated two goals and eight points against the Flames.
Hoping to replicate this success, Maurice has chosen to keep this trio together for at least the first game of this two-game series against the Maple Leafs, however, this loaded group might remain together for an extended period of time after they dominated on Monday. As for the club’s top line, it’ll also be very important for veterans @Blake Wheeler and @Paul Stastny to continue creating chemistry with Dubois as they aim to enjoy a solid performance at Bell MTS Place.

2. Staying Out of Penalty Trouble

While Winnipeg has been somewhat effective at killing penalties this season, as they’re currently tied for the 16th-highest success rate (78.4%) on the penalty kill, they’ve struggled to stay out of the “sin bin” recently, which has led to an increased number of power-play goals allowed. In total, this club has taken 10 penalties over the last three games (tied for fifth-most since Mar. 26) and has surrendered a trio of power-play goals during that span, which is tied for most in the league.
Even though the Maple Leafs’ power-play units have faltered this month, resulting in a measly 12.5% conversion rate (tied for seventh-lowest), they still feature plenty of superstar talent with the man advantage and could easily break out of this slump at any time. With this in mind, it’d be wise for the Jets to play as safe as possible in hopes of staying out of trouble Wednesday night.

Despite being featured on Winnipeg’s second line this season, although an argument could be made that it’s been the club’s most productive unit, Connor is enjoying another strong performance and his impressive efforts could allow him to enjoy a historic night during this matchup against Toronto. As of right now, the 24-year-old is just one even-strength goal away from passing fan-favorite @Dustin Byfuglien for ninth-most and is also just two power-play goals away from passing former captain @Andrew Ladd for ninth-most in franchise history, according to Jets PR.
Considering Connor leads the Jets in goals (17) and is positioned alongside Scheifele and Ehlers, there’s a pretty strong chance he’ll find the back of the net at least once during five-on-five situations Wednesday night. As for his production with the man advantage, the former first-round selection has only scored three power-play goals this month, but he could receive plenty of scoring chances on the wing if the Maple Leafs fail to remain disciplined during this showdown.

The puck will drop at 6:30 pm CT, yes, we’re finally back to a normal start time, and will be available on SN along with 680 CJOB.
Uncategorized
Recent articles from Thomas Hall