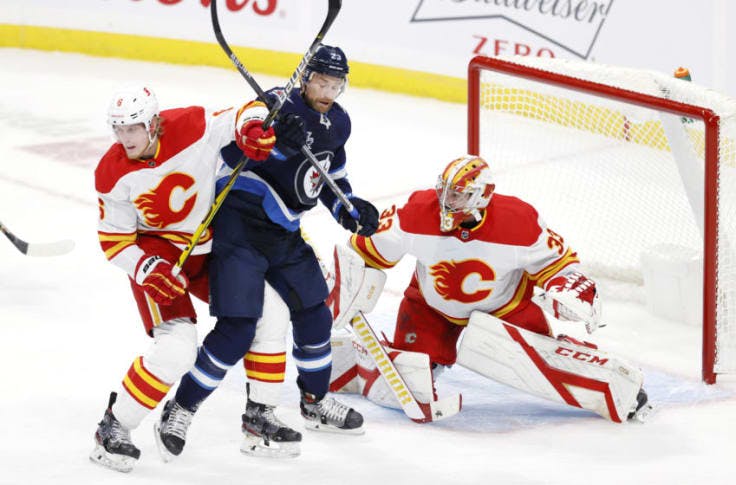 By Thomas Hall
1 year ago
After winning the second game of a back-to-back series against the Calgary Flames on Tuesday, the Winnipeg Jets earned their sixth victory on the young season and are now attempting to capture a second consecutive win ahead of their upcoming four-day break.
As crazy as it may sound, the 2020-21 campaign is already nearly 20 percent completed and yet we still haven’t seen this team perform at its full potential. With that in mind, this Thursday night showdown would be the perfect time for them to enjoy one of their top performances of the season, especially since they haven’t been playing at their best recently.
Here are three storylines that could impact the Jets’ third straight game against the Flames:

1. Connor Hellebuyck Looking to Bounce Back

Despite dominating in his first three starts of the season, resulting in a 2.00 goals-against average and a .935 save percentage, goaltender @Connor Hellebuyck hasn’t been performing at an elite level over his last four starts, as he’s allowed three goals or more in each of them and has produced a troubling .885 save percentage. To make matters worse, the 27-year-old allowed a knuckle puck from his opponent’s blue line to bounce past him on Monday, which ultimately allowed the Flames to mount a comeback in the third period.
Though Hellebuyck should’ve stopped that bouncing puck from crossing the goal line, it was an unfortunate occurrence that actually motivated him through the remainder of the game, allowing him to make several key saves during the final few minutes of regulation. While it didn’t help him hold off Calgary’s skaters in the shootout, there’s no question he’ll be utilizing that same motivation during Thursday’s rematch.

Unfortunately, Winnipeg will be without one of its top young skaters on Thursday night against Calgary, as forward @Jansen Harkins will be held out of the lineup due to a lower-body injury. Coming off a respectable showing on Tuesday, where he earned 9:19 minutes of ice time and produced a 50.0% faceoff percentage along with one block, the 23-year-old’s presence will surely be missed on the club’s fourth line.
With Harkins sidelined, teammate @David Gustafsson will be reinserted into the lineup after serving as a healthy scratch for the last two games and will skate alongside forwards @Trevor Lewis and @Kristian Vesalainen. Considering the 20-year-old has recorded just one shot on net and one takeaway through three games this season, a strong showing on Thursday night will likely help his chances of earning regular playing time moving forward.

Since the Jets feature one of the top goaltenders in the entire league, most people would think they wouldn’t have any issues closing out games during the third period, however, that hasn’t been the case over the last week or so. Over the last three games, they’ve allowed four goals in the final frame, which is tied for the second-most goals allowed among all 31 teams in the league.
Considering the Flames are tied for the third-most goals scored (four) in the final frame during that same span, it’ll be extremely important for this team to tighten things up in the defensive zone on Thursday. If that happens, then they probably won’t need Hellebuyck to carry them through the final few minutes of the third period once again, which would certainly be a welcomed occurrence.