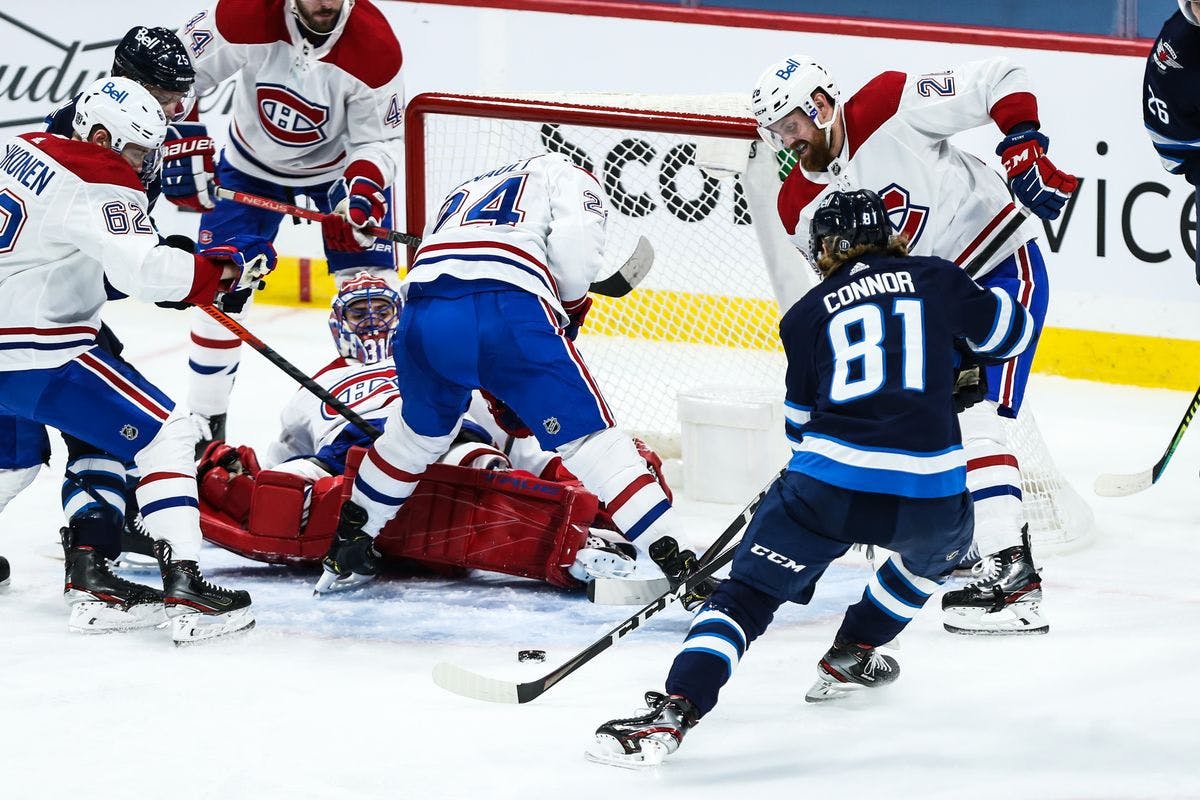 By Thomas Hall
1 year ago
Following a back-to-back series split against the Vancouver Canucks, the Winnipeg Jets hit the road for the east coast and are scheduled to begin a five-game road trip, starting on Thursday night against the Montreal Canadiens.
Similar to the last time these two teams met, Montreal has made another coaching change ahead of this matchup, as they’ve fired former goalie coach Stephane Waite – who’s served in this role since 2013 – and have replaced him with Sean Burke. While this latest move isn’t as notable as naming a new head coach, it’ll still be very interesting to see how this club responds during their first game without Waite on the bench.
Here are three storylines that could impact the Jets’ third game of the season against the Canadiens:

While it may not seem like it, especially since Winnipeg was shutout on Monday, their power play has enjoyed a pretty impressive run over the last month and a bit, as they currently own the seventh-highest conversion rate (27.0%) among all 31 teams since Feb. 1. Digging deeper into this impressive stretch, this club has scored at least one goal with the man advantage in eight of their last 11 games and have been led by forwards @Blake Wheeler and @Mark Scheifele, who are tied for the team-lead in power-play points (four) during that span.
As for the Canadiens, they’ve struggled mightily to stay out of the penalty box through 21 games this season, as they’ve taken the third-most penalties (97) and have also recorded the fourth-most penalty minutes (226) in the league. Since they’re also tied for the third-most power-play goals allowed (19) in 2021, it appears this contest could provide the Jets another opportunity to generate plenty of offense with the man advantage on Thursday.

After recovering from a lower-body injury, forward @Pierre-Luc Dubois didn’t waste any time making an impact for the Jets, as he scored three goals and five points during his first two games back in the lineup. But since then, the 22-year-old hasn’t registered a single point over the last three games and has returned to the club’s second line, but it appears he still needs a little more time to create a strong connection with teammates @Kyle Connor and @Nikolaj Ehlers.
Along with failing to break out of his mini scoring slump, Dubois has generated just one high-danger scoring chance and a 0.23 xG during five-on-five situations over the last two games, which is certainly less than ideal. Considering the former first-round pick will be playing his third game alongside Connor and Ehlers, there’s a strong chance this trio will finally start producing some much-needed results in this meeting against the Canadiens.

Thanks to the 56-game shortened season, the Jets will be extremely busy this month as they’re scheduled to play almost every other day and are also slated to play 12 of their next 15 games on the road – including this current five-game road trip. Adding to this, they’re also coming off a back-to-back series against the Vancouver Canucks and only received one day of rest, which was spent traveling to the east coast.
Taking into account this lack of time off, it certainly wouldn’t be shocking to see this team’s energy level drop off in the later stages of the game, especially since puck drop is scheduled for 6 pm CT. But since Winnipeg is currently tied for the third-fewest number of goals allowed (15) in the third period, they’ll likely be able to avoid any kind of collapse late in the game, however, holding onto leads has been somewhat of an issue for them in 2021.

The puck will drop at 6 pm CT, everyone better leave work early, and will be available on TSN 3 along with 680 CJOB.
Uncategorized
Recent articles from Thomas Hall