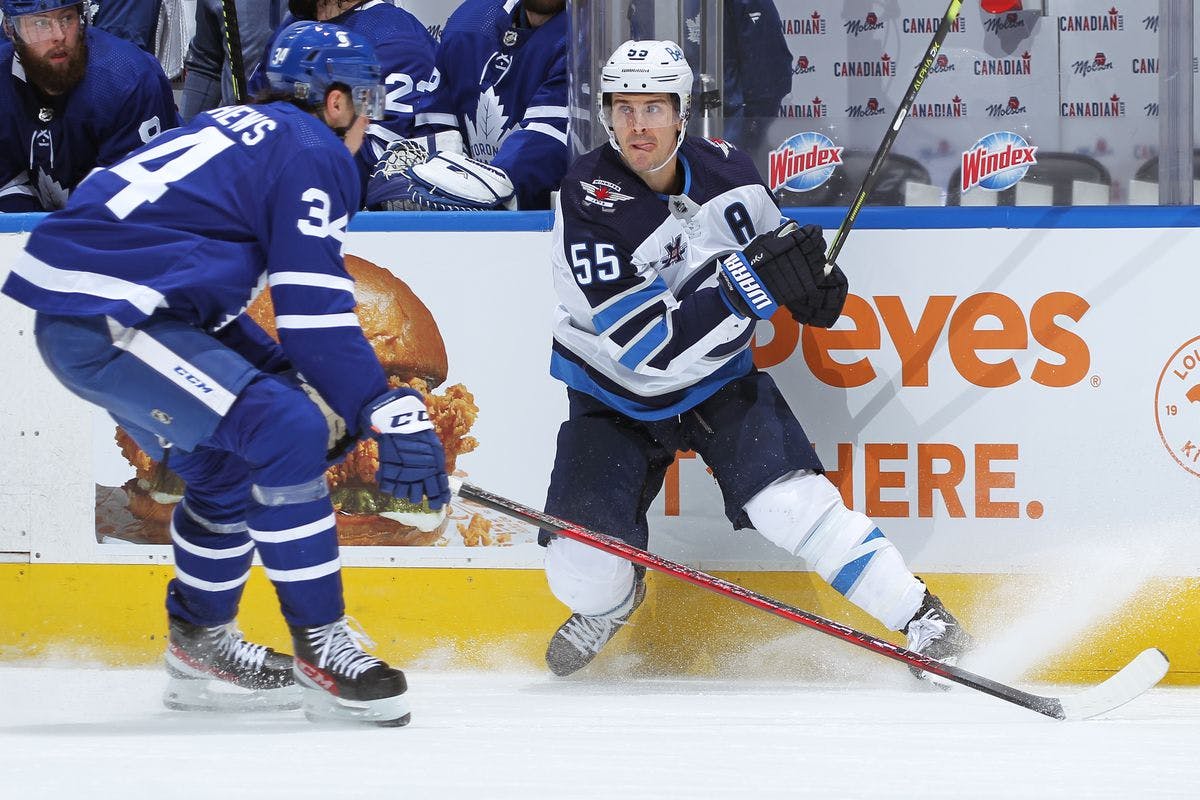 By Thomas Hall
1 year ago
Coming off a 4-3 victory over the Toronto Maple Leafs, the Winnipeg Jets are now hoping to capture two consecutive wins against this same opponent, although accomplishing that feat certainly won’t be an easy task with the way last game ended.
Despite holding a 4-2 lead midway through the third period on Tuesday, Winnipeg was faced with an enormous amount of pressure late in regulation and they struggled mightily to play clean and effective in the defensive zone. But with goaltender @Connor Hellebuyck between the pipes, Toronto failed to score more than one goal before the final horn sounded, preventing them from winning the first game of this three-game series.
Here are three storylines that could impact the Jets’ third game of the season against the Maple Leafs:

After blocking a shot during Tuesday’s contest, the Jets were forced to place defenseman @Nathan Beaulieu on the injured reserve and he’s expected to be sidelined for at least the next two weeks. Needing someone to serve as an injury replacement, coach Paul Maurice has decided to promote rookie @Logan Stanley, who hasn’t played since Feb. 13, from the club’s practice squad and will position him alongside veteran @Dylan DeMelo on the third defensive pairing.
While Stanley admitted he’s a little nervous about appearing in his first game in nearly a month, this showdown against the Maple Leafs should provide him an opportunity to showcase his skills once again, especially since he’ll receive some playing time on the penalty kill. If the 22-year-old blueliner performs effectively on Thursday, then perhaps he’ll remain in the lineup moving forward until Beaulieu returns from his hand injury.

2. Jets Allowing Too Much Space in High-Danger Areas

Since the Maple Leafs pride themselves on being a quality over quantity shooting team, forcing them to the outside and limiting their scoring chances in the middle of the ice is one of the best ways to defend them. Unfortunately, the Jets struggled to defend in their own zone on Tuesday, allowing their opponent to generate 16 high-danger scoring chances during five-on-five situations.

Source: NaturalStatTrick.com
In an effort to relieve some of the pressure on Hellebuyck, Winnipeg will need to clog up the middle of the ice much more effectively during the second game of this three-game series. But if they fail to achieve this goal once again, there’s a very strong chance Toronto will be able to create plenty of quality scoring chances for the second straight game, which could potentially lead to significantly more goals this time around.

With puck possession becoming a major aspect of today’s game, most teams across the league have made it a priority to excel on the faceoff dot and that’s something the Jets have somewhat struggled with so far this season, as they’re currently tied for the 11th-lowest faceoff percentage (48.5%) among all 31 teams. Considering the Maple Leafs currently sit in the top 10 in that department, they’ve been able to dominate in the faceoff circle and did exactly that on Tuesday night.
Along with creating a 59.1% overall faceoff percentage, Toronto controlled the faceoff circle in all three zones, resulting in a 52.9% offensive and neutral zone faceoff percentage, and a 66.7% defensive zone faceoff percentage. Digging deeper into these results, forwards @Mark Scheifele and @Pierre-Luc Dubois lost a combined 15 faceoffs during this matchup, meaning it’ll be crucial for both of them to find a way to bounce back on Thursday.

The puck will drop at 6 pm CT, again, and will be available on TSN 3 along with 680 CJOB.
Uncategorized
Recent articles from Thomas Hall