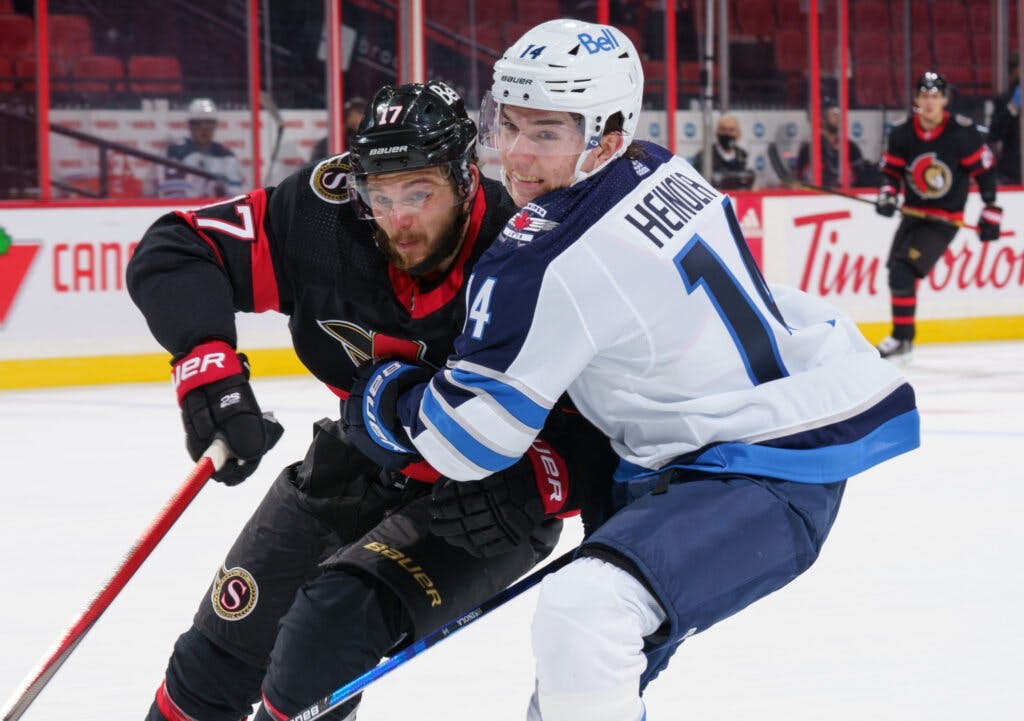 By Thomas Hall
1 year ago
Thanks to a dominating 4-0 victory over the Calgary Flames, the Winnipeg Jets finally snapped their seven-game losing streak Wednesday night and are looking to build some much-needed momentum towards the playoffs, especially since there’ll be just three games remaining in the regular season following this primetime showdown.
After being held to just one goal during Monday’s matchup against the Ottawa Senators, Winnipeg will need to find a way to create sustainable pressure in the offensive zone against the same team that’s allowed one goal or fewer in four of its last seven games. But since the Jets just broke through their recent scoring woes, as they received a pair of goals from each forwards @Adam Lowry and @Blake Wheeler last game, making an impact on the scoreboard might not be nearly as difficult as it was at the start of the week.
Here are three storylines that could impact the Jets’ final game of the regular season against the Senators:

1. Neal Pionk Held Out of Lineup

Missing Friday’s practice due to maintenance, defenseman @Neal Pionk won’t be suiting up for the Jets Saturday night due to an undisclosed injury, however, he’s considered “day-to-day” and isn’t dealing with anything serious. With the playoffs just over a week away, the coaching staff is attempting to prepare one of its most important blueliners for the upcoming postseason, meaning they want to have him as healthy as possible before the opening round begins.
Since Winnipeg has already clinched a playoff spot, there isn’t much left to play for during these last few games, so there isn’t any harm in making sure Pionk is 100 percent ready before he returns. As for who’ll fill in alongside defenseman @Josh Morrissey, veteran @Dylan DeMelo will join the top defensive pairing during this showdown against Ottawa, which is a duo that certainly hasn’t played together nearly as much as they should’ve in 2021.

Despite spending the majority of this season in the AHL, defenseman @Ville Heinola has made a couple of brief cameos with the Jets and is now working towards earning a roster spot for this team’s upcoming postseason run. Following his impressive performance during Wednesday’s contest against the Flames, where he boxed numerous defenders and also served as a quality puck mover, coach Paul Maurice confirmed the 20-year-old would return to the lineup Saturday in hopes of receiving another notable outing from the young blueliner.
With Pionk sidelined, Heinola won’t be able to skate alongside DeMelo once again, although he’ll still have a veteran presence on his side, as teammate @Jordie Benn will draw into the lineup and skate on the third defensive pairing. Though it may take the youngster a little time to adjust to his new linemate, there’s no question he’s talented enough to make the best out of this situation and will be looking to prove he deserves an extended look throughout the remainder of the regular season.

After allowing four power-play goals from Apr. 28-30, Winnipeg’s penalty kill has since returned to its dominating form and has gone a perfect 8-for-8 over the last two games, which is tied for the highest success rate during that span. But considering Lowry, who’s been a key part of the penalty kill all season long, has played in each of those contests, it’s not entirely surprising to see this team tighten things up with the 28-year-old back in the lineup.
Considering the Senators currently own the sixth-lowest conversion rate (15.8%) on the power play this season, there’s a very good chance the Jets will be able to keep their perfect streak alive heading into the final three games of the season. Having said that, it’d also be very beneficial for this club to improve its discipline moving forward, potentially helping them avoid taking eight different penalties during a two-game span.

The puck will drop at 6 pm CT and be available on CBC/SN – back to the national broadcast – along with 680 CJOB.
Uncategorized
Recent articles from Thomas Hall