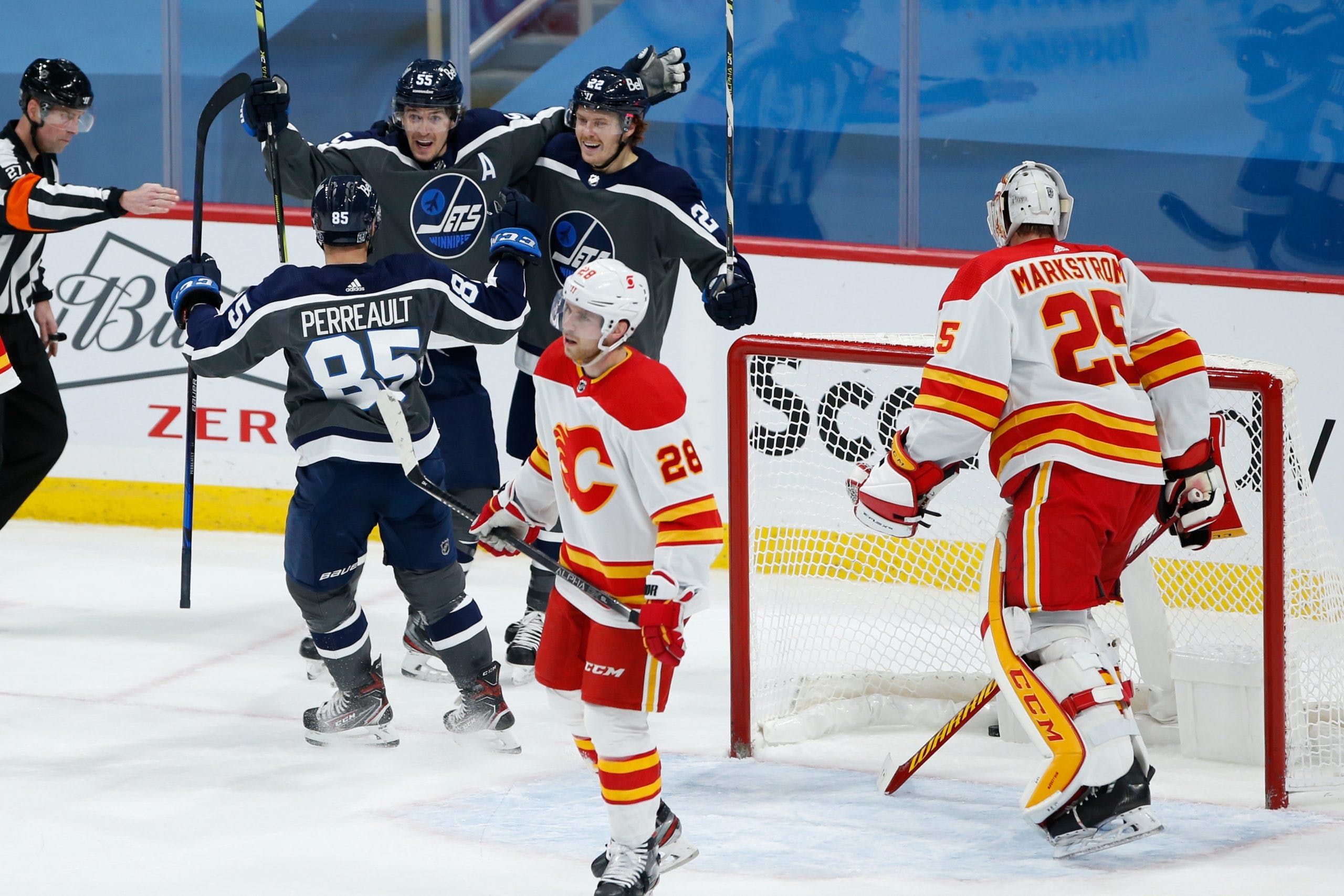 By Thomas Hall
1 year ago
After losing a seventh straight game, the Winnipeg Jets are currently riding their longest stretch without a victory since they returned to the “True North” and will be aiming to turn things around during their final road game of the regular season, which will take place against the Calgary Flames.
In eight previous meetings this season, Winnipeg has won five of those contests against Calgary and could certainly benefit from another victory during this Wednesday night showdown. Since this club is currently tied in the standings with the Montreal Canadiens, coming away victorious could help them create some much-needed separation for third spot in the North Division, although finishing in fourth place might not be the worst outcome either.
Here are three storylines that could impact the Jets’ final game of the regular season against the Flames:

Without question, it’s been a rollercoaster type season for forward @Mathieu Perreault, who was placed on waivers after training camp concluded, has spent time on both the third and fourth lines and has now been paired with teammate @Pierre-Luc Dubois in each of the last three games. As a result of this new pairing, the 33-year-old has earned at least 15:00 minutes of ice time over the past two contests and has started to create some encouraging chemistry with his new linemate.
While Perreault hasn’t created any points in this new role, he’s still found a way to make an impact for Winnipeg, particularly during his last time out as his on-ice presence earned him a 55.6% CF percentage, 71.4% FF percentage, 66.7% SCF percentage and a 66.8% xGF percentage, according to NaturalStatTrick.com. If the veteran forward can replicate these impressive metrics, this newly formed second line, which also features @Paul Stastny, could help this team break out of their recent slump.

Despite leading the Jets in goals (22) this season, forward @Kyle Connor hasn’t found the back of the net in each of the last five games, as his last goal came on Apr. 22 against the Toronto Maple Leafs. Even though the 24-year-old has produced five blocks and three hits during this scoreless stretch, he’s only generated five shots on net, five scoring chances and one rebound over that same span.
Digging deeper into Connor’s offensive woes, none of his scoring chances have come from high-danger areas and only two of his shots on goal have occurred during five-on-five play over the last five games, which are major factors that have led to his recent struggles. Considering the former first-round pick has scored 10 of his 22 goals on the power play, it’ll also be extremely important for him to start producing with the man advantage once again, however, his last special teams goal came on Apr. 15.

With the Jets seemingly desperate for a win, there’s no question they’ll be looking to come out strong in the first period, in hopes of taking an early lead and setting the tone through the rest of the way. Since this team has allowed the game’s opening goal in five of its last seven defeats, it’d likely be very beneficial to score first against the Flames, especially since they’ve lost four of their last seven games when trailing first.
Considering these two clubs have combined to score 17 goals in the opening 20 minutes through eight games against each other, chances are Wednesday’s matchup could feature plenty of offense early on, potentially leading to plenty of action for goaltenders @Connor Hellebuyck and @Jacob Markstrom. Having said that, the Jets have been held to just one goal in four of their last five games, so there’s also a strong chance their struggles in the offensive zone could continue throughout this game.

The puck will drop at 8:30 pm CT and be available on TSN 3 along with 680 CJOB.
Uncategorized
Recent articles from Thomas Hall