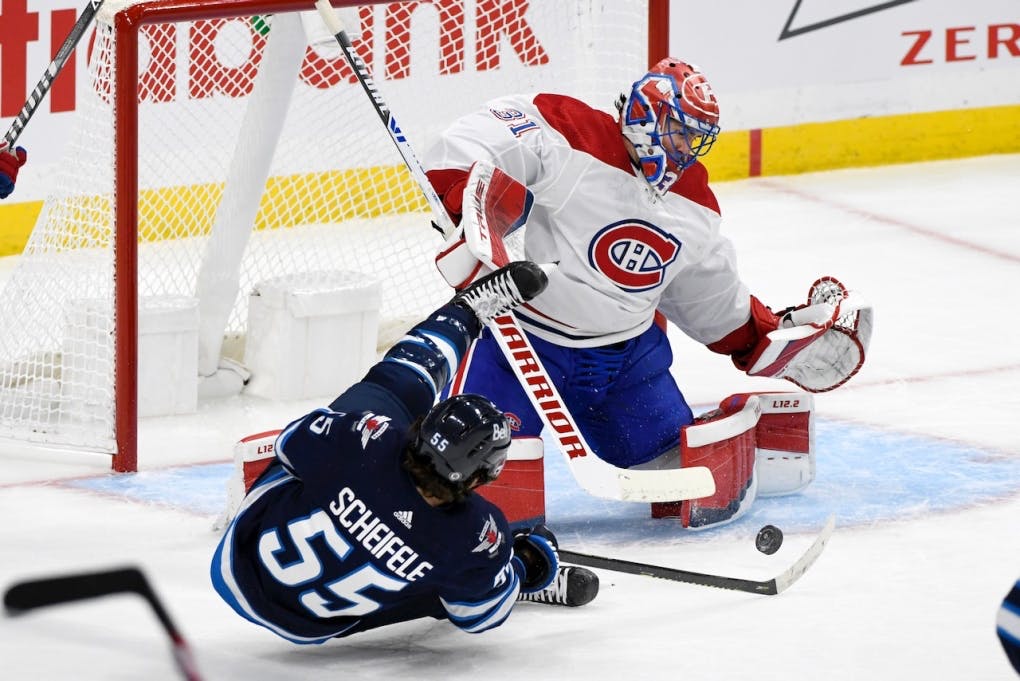 By Thomas Hall
1 year ago
Following a nail-biting 3-1 defeat against the Edmonton Oilers, the Winnipeg Jets have now lost five straight games and are looking to close out April on a high note, as they’re scheduled to finish their season series against the Montreal Canadiens.
Though it’s never fun riding an extended losing streak, especially late in the regular season, Winnipeg displayed plenty of improvement last time out against Edmonton and looked nothing like the team who was blown out 6-1 back on Monday. Since this club has also won six of the eight meetings against Montreal, who’s lost five of their last seven games, this could be the perfect time to end this current slide.
Here are three storylines that could impact the Jets’ final game of the regular season against the Canadiens:

Missing the last three games due to a head injury, forward @Adam Lowry skated in a regular practice jersey during Friday’s morning skate and could become a full participant at practice on Sunday, suggesting he could return to the lineup on May 3. In the meantime, center @Pierre-Luc Dubois will continue manning the third line alongside teammates @Mathieu Perreault and @Kristian Vesalainen.
Considering this trio flourished against the Oilers Wednesday, finishing with the second-highest CF% (40.0%), FF% (50.0%), xGF% (36.7%) and SCF% (40.0%) among all four lines, it’ll be very interesting to see if they can replicate that success against the Canadiens. Having said that, this line probably won’t receive an increase in playing time compared to last game, meaning they’ll need to make a strong impact during just 10-12 minutes of ice time.

After allowing numerous scoring chances off the rush and multiple breakaways from captain @Connor McDavid, the Jets significantly improved their defensive intensity during the second half of the two-game series against the Oilers, limiting them to an xG rate of less than 1.0 during five-on-five play through the first 40 minutes. As a result, Edmonton’s skaters didn’t have nearly as many clean entries into the offensive zone as they did Monday, forcing them to grind for almost every quality scoring chance they created.
With this in mind, it’d make plenty of sense to apply this same game plan against Montreal’s skaters, especially since they don’t feature any high-powered offensive forwards who can dramatically change the game in a flash. If Winnipeg’s skaters can accomplish this feat, chances are this contest will largely be played along the boards and could result in a fairly low-scoring affair.

Despite riding a five-game pointless streak entering Friday’s contest, defenseman @Neal Pionk has a chance to earn a well-deserved milestone during his 50th game of the season, as he’s just two assists away from reaching 100 NHL assists for his career. Though the 25-year-old registered 33 of those assists in two seasons with the New York Rangers, adding two more would give him 67 career assists in 121 games with the Jets, which would be a very impressive accomplishment.
Approaching history himself, forward @Mark Scheifele is just one goal away from joining captain @Blake Wheeler as the only two players in franchise history to score 200 career goals since the team moved back to Winnipeg. But considering the 28-year-old has only netted one goal in eight games against Montreal this season, it might be difficult for him to reach this milestone Friday night, however, he’s scored two goals over the last four games. So anything is possible.

The puck will drop at 6 pm CT and be available on TSN 3 along with 680 CJOB.
Uncategorized
Recent articles from Thomas Hall