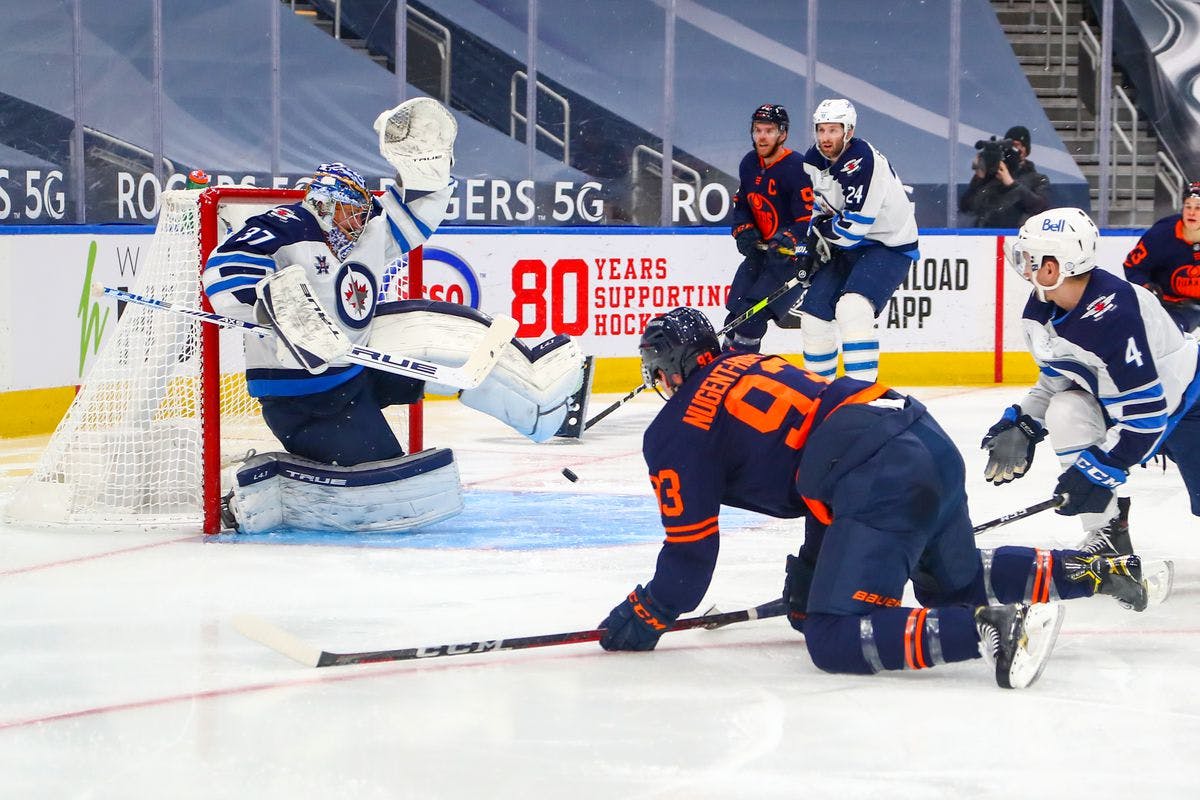 By Thomas Hall
1 year ago
After dropping the first game of this two-game series against the Edmonton Oilers, the Winnipeg Jets are looking to return to their winning ways and are also hopeful to score more than just one goal during this late-night affair on Saturday.
Preparing to play their fourth game in six nights, fighting off fatigue will be one of the biggest challenges for Winnipeg and it certainly won’t be easy to accomplish that feat, especially since they’re facing off against one of the best offenses in the league. But considering Edmonton is scheduled to play its sixth game in nine nights, there’s a very strong chance both of these teams will sleep very well once their heads hit the pillows.
Here are three storylines that could impact the Jets’ sixth game of the season against the Oilers:

1. Looking to Bounce Back After Tough Loss, Again

While rebounding after a loss is never an easy task for any team, the Jets have done exactly that so far this season as they own an 8-0-1 record following a regulation defeat, with the lone shootout loss coming against the Calgary Flames on Feb. 1. Digging deeper into their bounce-back performances, this team has scored at least four goals in seven of those eight victories and only earned two of those wins beyond the third period.
Based on these results, odds are Winnipeg will ultimately prove to be the better team in this rematch against Edmonton, although that might be easier said than done. Since the Oilers have won six of their last eight games, averaging 4.00 goals per game (tied for second-most) during that span, avoiding consecutive regulation losses may end up being unattainable this time around.

Considering the Oilers have produced the fourth-highest conversion rate (27.8%) on the power play in 2021, it’ll be extremely important for the Jets to remain disciplined throughout this contest or it may be difficult for them to avoid losing back-to-back games. But considering this team has committed the fifth-fewest number of penalties (11) since Mar. 11, it seems they should be capable of staying out of the penalty box during this Saturday night showdown.
Thanks to this level of discipline, Winnipeg has excelled at killing penalties during that same span as they’ve only allowed one power-play goal over the last five games, which is tied for second-fewest among all 31 teams in the league. So if they can force Edmonton to play at even strength all game long, or at least for the majority of the contest, then their chances of coming away victorious will likely increase significantly.

With defenseman @Nathan Beaulieu sidelined with an upper-body injury, rookie @Logan Stanley was called upon to serve as an injury replacement and the 22-year-old has filled in fairly well up to this point, which has been a very encouraging sign for his development. Since rejoining the lineup on Mar. 11, the former first-round pick has produced one assist, seven blocks, seven hits, six shots on net and has been on the ice for just two goals allowed over his 12:17 minutes of ice time per game.
Comparing these promising results against other rookie defensemen in the league, Stanley is currently tied for the third-most hits and blocks, and is also tied for the fifth-most shots on net during that span. While the towering 6′ 7″ blueliner will probably return to the taxi squad once Beaulieu is fully recovered from his injury, he’s still finding a way to make the most out of this opportunity and it’ll be very interesting to see how he performs during a second consecutive game against the Oilers.

The puck will drop at 9 pm CT, rest up people, and will be available on CBC/SN along with 680 CJOB.
Uncategorized
Recent articles from Thomas Hall