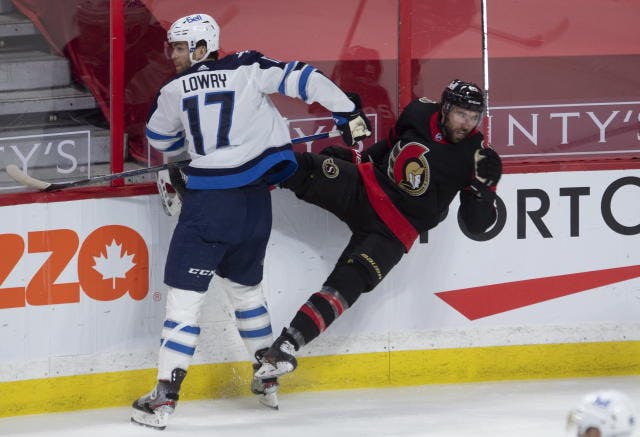 By Thomas Hall
1 year ago
Following a horrendous finish to April, which featured a six-game losing streak, there probably isn’t anyone happier to see the calendar change to May than the Winnipeg Jets, who haven’t won a game since Apr. 15 and will be looking to end that drought against the Ottawa Senators.
Unfortunately for Winnipeg, this current slide has caused them to drop down to third place in the North Division, positioning this team just two points ahead of the Montreal Canadiens. But if they don’t turn things around fairly quickly, they could drop down to fourth place, likely forcing them to face off against the Toronto Maple Leafs in the opening round of the 2021 playoffs.
Here are three storylines that could impact the Jets’ ninth game of the regular season against the Senators:

After suffering a head injury on Apr. 22 against the Maple Leafs, forward @Adam Lowry missed the next four games and his departure from the lineup is definitely one of the major reasons for the Jets’ current losing streak. But after being a full participant in Sunday’s practice, the 28-year-old is now ready to make his return and will skate alongside teammates @Andrew Copp and @Mason Appleton, who were previously paired with center @Mark Scheifele.
With Lowry rejoining the third line, wingers @Kyle Connor and @Blake Wheeler will both return to the top line, skating alongside Scheifele. As for the club’s second line, forwards @Pierre-Luc Dubois and @Mathieu Perreault will remain paired together and they’ll be joined by veteran @Paul Stastny, who’s expected to return to the wing.

2. Logan Stanley Draws Back into Lineup

Since defenseman @Jordie Benn has played each of the last three games, rookie @Logan Stanley has been forced to serve as a healthy scratch during that same span, although coach Paul Maurice revealed the young blueliner will suit up for Monday’s contest against the Senators. Set to appear in his first game since Apr. 24, the towering 6′ 7″ defenseman will return to his regular spot alongside veteran @Dylan DeMelo on the third defensive pairing.
While Benn has performed respectably over the last three games, producing five blocks, two hits and a +2 rating, he’s been on the ice for 17 scoring chances allowed in those same contests and hasn’t earned a regular role in the lineup just yet. With that in mind, this matchup against Ottawa would be the perfect time for Stanley to convince Winnipeg’s coaching staff he deserves additional playing time down the stretch and heading into the playoffs as well.

Considering goaltender @Connor Hellebuyck has started each of the last seven games, posting a 3.99 goals-against average and a .874 save percentage during that stretch, there’s no question he deserves somewhat of a breather, especially since he’s been left out to dry numerous times during this six-game losing streak. With the 2019-20 Vezina Trophy winner earning the night off Monday, backup @Laurent Brossoit will be making just his 10th start of the season and his first since Apr. 14.
Despite receiving very little playing time this season, Brossoit has performed far beyond his expectations up to this point, as he’s recorded a 2.39 goals-against average, .922 save percentage and one shutout through 12 games. In particular against the Senators, the 28-year-old has won both of his starts against them in 2021, creating a 2.47 goals-against average and a .929 save percentage during those showdowns.

The puck will drop at 6 pm CT and be available on TSN 3 along with 680 CJOB – don’t you dare miss it!
Uncategorized
Recent articles from Thomas Hall