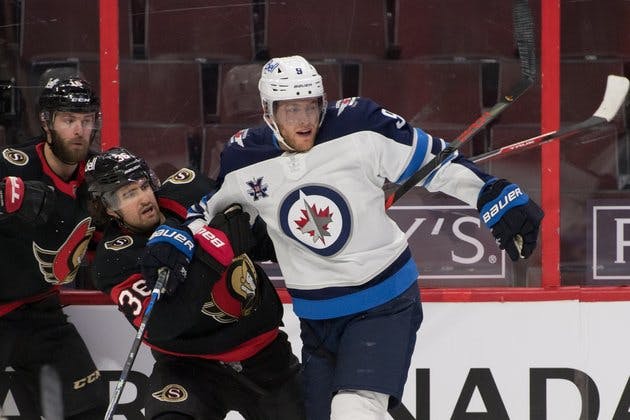 By Thomas Hall
1 year ago
Coming off consecutive losses against the Toronto Maple Leafs, the Winnipeg Jets received an unexpected two-day break over the weekend due to the Vancouver Canucks’ COVID-19 outbreak, and are now scheduled to take on the Ottawa Senators Monday night.
Though this contest was originally slated to occur on May 7, this scheduling change will allow both of these teams to avoid playing a back-to-back series at the end of the regular season, which is certainly ideal. Considering Winnipeg just enjoyed its longest break since Mar. 8, they should be fully rested and prepared to begin inching their way back to the top of the North Division, as they’re currently six points behind Toronto.
Here are three storylines that could impact the Jets’ sixth game of the season against the Senators:

1. Switching Up the Top-Six Forwards, Again?

With the Jets scoring just a pair of goals through two games against the Maple Leafs, coach Paul Maurice has hinted at possibly changing up the top-six forwards once again, even though these top two lines have only been together for a few games. Following the club’s morning skate, Maurice revealed there won’t be any lineup changes ahead of Monday’s contest against the Senators, however, that doesn’t mean he won’t hesitate to move players around during the game.
While the top line of @Kyle Connor, @Mark Scheifele and @Nikolaj Ehlers may start the game together, there’s a chance this trio could be split up before regulation concludes. Since the team’s second line, featuring @Paul Stastny, @Pierre-Luc Dubois and @Blake Wheeler, has struggled to perform effectively as of late, it’d make plenty of sense to send Connor or Ehlers down to this group in hopes of providing a much-needed spark.

Despite Winnipeg’s recent scoring woes, this could be the perfect opportunity for them to break out of this current slump, as Ottawa is considered one of the worst defending teams in the NHL. Failing to defend effectively, the Senators have allowed the most goals per game (3.71), the third-most shots on net per game (32.5), the fourth-most high-danger scoring chances (449) and the fourth-most high-danger goals (70) in the league, according to NHL.com.
Based on these metrics, the Jets shouldn’t have any issues creating a ton of havoc in the offensive zone through all three periods, applying plenty of pressure on the Senators’ netminder. Having said that, it’ll also be extremely important for all four lines to win the majority of puck battles in the other half of the rink, allowing them to create sustained pressure and numerous quality scoring chances all game long.

Following a red-hot start to this season, resulting in four goals and 12 points through the first 12 games, forward @Andrew Copp hit a wall once February came around as he scored just three assists in 12 games. Luckily for the Jets, the 26-year-old has regained his scoring touch recently, allowing him to produce seven goals and nine points since Mar. 20.
In particular, Copp set a new career-high by scoring his 12th goal of the season Friday, which also matched a career-high in points (28). With the former fourth-round selection slated to become a restricted free agent after this season, generating career-highs in goals per game (0.32) and points per game (0.74) could set him up for a very nice payday over the summer, especially since he’s currently on pace for the first 40-point season of his career.

The puck will drop at 6 pm CT, remember to leave work early for this one, and will be available on TSN 3 along with 680 CJOB.
Uncategorized
Recent articles from Thomas Hall