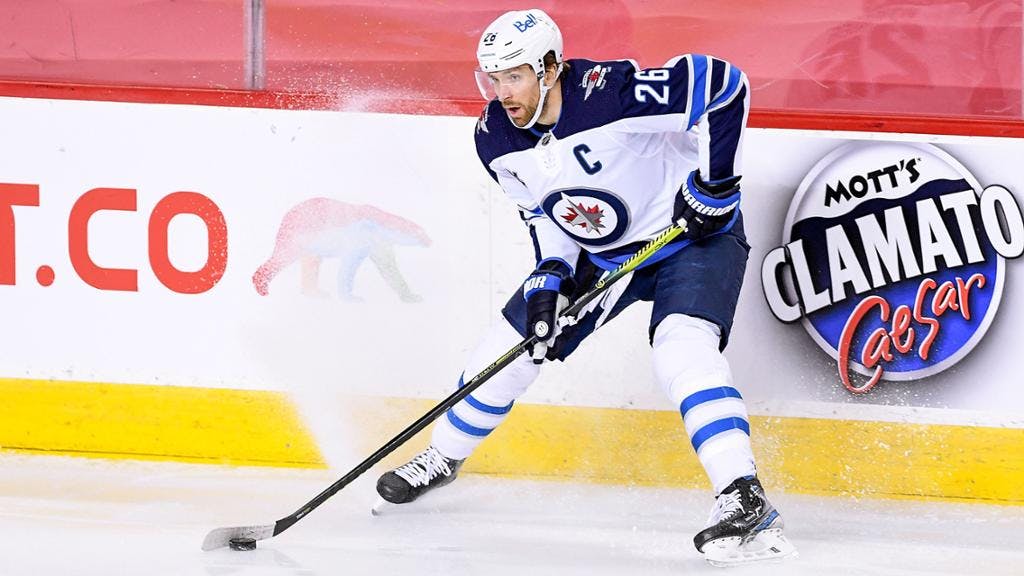 By Thomas Hall
1 year ago
Following a four-day break – it’s been far too long without hockey – the Winnipeg Jets will finally return to action Thursday night as they attempt to gain some ground on the Toronto Maple Leafs, who currently sit four points ahead of them for first place in the North Division.
Despite coming away with a 5-2 victory back on Apr. 15, Winnipeg hasn’t fared overly well against Toronto this season, losing four of the seven games against them. But with the Maple Leafs currently riding a five-game losing streak, this could be the perfect time to exact some revenge and help them continue their losing ways, which would certainly cause the fanbase to freak out even more than they already are.
Here are three storylines that could impact the Jets’ eighth game of the season against the Maple Leafs:

Beating the buzzer at this season’s trade deadline, general manager Kevin Cheveldayoff acquired defenseman @Jordie Benn, who hasn’t played since Mar. 24, from the Vancouver Canucks in exchange for a sixth-round pick in this year’s NHL Draft. Considering the 33-year-old was quarantined before arriving in Winnipeg this past Friday, the team allowed him to work on his conditioning during this mini-bye week and believe this is a great opportunity for him to make his debut.
With Benn joining the Jets’ lineup Thursday, rookie @Logan Stanley will serve as a healthy scratch, creating an opening for the left-handed blueliner to skate alongside veteran @Dylan DeMelo on the third defensive pairing. Despite posting just one goal and nine points through 31 games this season, the coaching staff is hopeful the former undrafted free agent can utilize his impressive communication skills to help improve this club’s performance in the defensive zone.

After missing six games due to a concussion, captain @Blake Wheeler is ready to return to action and will be suiting up for his first game since Apr. 5, which is when forward @Brady Tkachuk elbowed him in the head. While the 34-year-old was positioned alongside teammates @Paul Stastny and @Pierre-Luc Dubois at the time of his injury, coach Paul Maurice has reshuffled the top-six forwards once again, reuniting the 81-55-26 line.
Even though this trio of @Mark Scheifele, @Kyle Connor and Wheeler hasn’t been very effective at defending in their own zone, Maurice is hoping they can provide an offensive spark against Toronto’s high-powered offense. As a result of this line change, forwards @Nikolaj Ehlers, Stastny and Dubois will now be paired together on the second line, which will hopefully lead to plenty of success during this Thursday night showdown.

3. All Eyes on Connor Hellebuyck

With the Jets looking to move up in the standings, there’s no question they’ll be counting on goaltender @Connor Hellebuyck to help carry the freight during this highly-anticipated contest, which shouldn’t be anything new for him at this point. In his six previous meetings against the Maple Leafs, the 27-year-old has performed to a 2-2-2 record, generating a 2.49 goals-against average and a .929 save percentage.
But considering Toronto is currently tied for the fifth-fewest goals scored per game (2.20) since Apr. 12, it might not be too difficult for Hellebuyck to frustrate their skaters, especially since he’s already accomplished that feat multiple times this season.

The puck will drop at 6 pm CT, don’t worry it’s perfectly fine to leave work early or just don’t go at all, and will be available on TSN 3 along with 680 CJOB.
Uncategorized
Recent articles from Thomas Hall