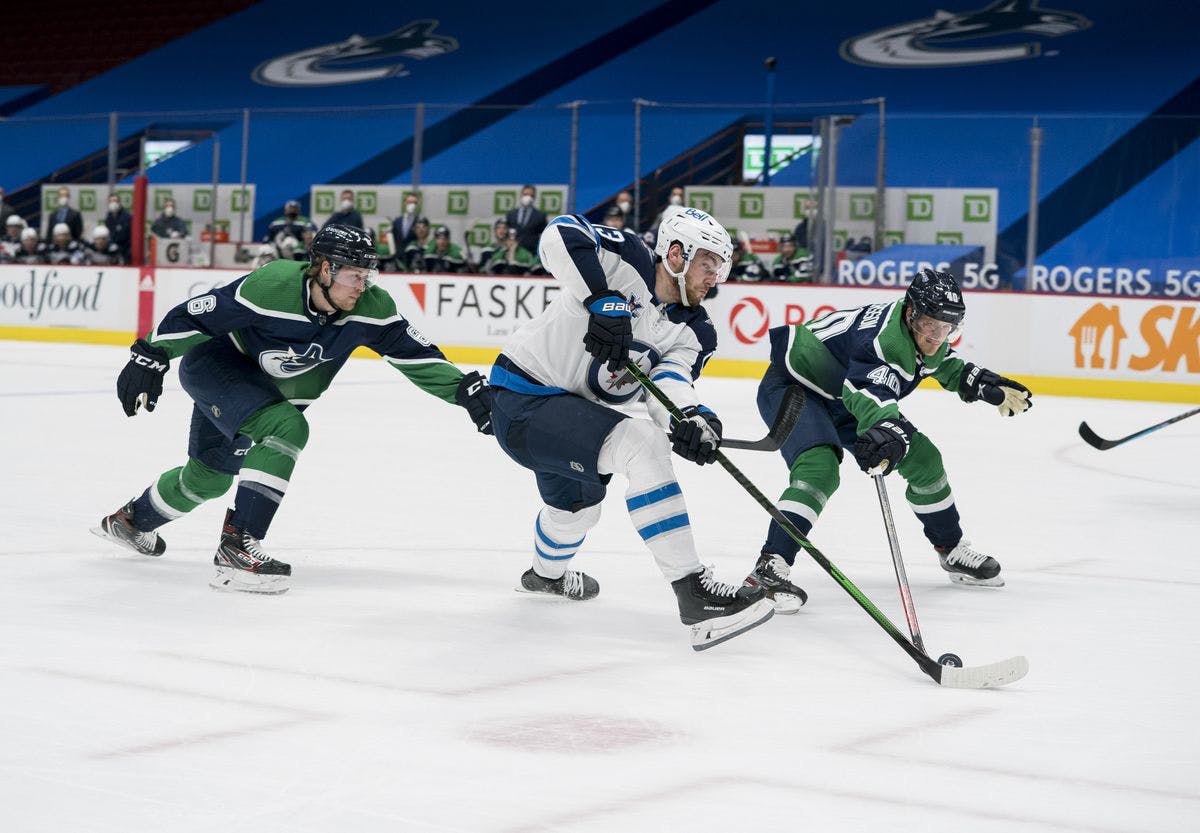 By Thomas Hall
1 year ago
After losing consecutive games in regulation for the first time this season, the Winnipeg Jets were forced to regroup on Sunday and are now aiming to get back on track during the first of two games against the Vancouver Canucks.
With Vancouver just three points behind Winnipeg in the standings, this two-game series will be extremely important for both teams, especially since first and fifth place in the North Division are only separated by seven points. As a result, there’s a strong chance the standings could feature plenty of movement before this week concludes, which makes the all-Canadian Division even more exciting than it already is.
Here are three storylines that could impact the Jets’ sixth game of the season against the Canucks:

1. Coming Out Strong in First Period

Considering the Jets are looking to put their losing ways behind them, it’ll likely be very beneficial for their skaters to set the tone early on in this game, meaning they’ll need to create plenty of pressure in the offensive zone during the first 20 minutes. While this team is comfortable playing from behind, taking that approach will only put them in danger of losing three straight games and that’s an outcome no one wants to see come to fruition.
Since the Canucks have allowed the third-most goals (32) in the first period this season, odds are the Jets will be able to create plenty of scoring opportunities and carrying a lead into the middle frame should certainly be attainable for them. Having said that, this opponent is also tied for the fifth-most goals (30) scored in the opening period, suggesting this Monday night showdown may feature a ton of offense shortly after puck drop.

After starting the last four games alongside each other, coach Paul Maurice has decided to break up defensemen @Josh Morrissey and @Dylan DeMelo ahead of Monday’s game, which is an unpopular decision amongst the fanbase. Though these two blueliners have struggled to perform effectively as of late, as they’ve been on the ice together for three goals allowed over the last four games, the alternative option to this pairing doesn’t seem to provide the club significant upside.
With veteran @Tucker Poolman moving to the top defensive pairing, we’ll see how long that lasts, DeMelo is returning to the third pairing alongside rookie @Logan Stanley. While Maurice credited these lineup changes to “matchups,” there’s no timeline for when Morrissey and DeMelo could be reunited once again, making this a disappointing development.

Following a brief stint on the top line with teammates @Blake Wheeler and @Mark Scheifele, the Jets moved forward @Pierre-Luc Dubois back to center and positioned him alongside wingers @Kyle Connor and @Nikolaj Ehlers – loading up the second line with plenty of talent. Despite enduring a six-game pointless streak, which spanned from Feb. 27-Mar. 9, the 22-year-old has since started coming into his own and has been showcasing his strong power forward presence recently.
Along with scoring one goal and six points over the last six games, Dubois has also generated 13 shots on net, 12 hits, seven blocks, four takeaways and a 59.1% faceoff percentage. Taking into account these impressive results, Winnipeg will surely be counting on the former first-round selection to maintain this impressive level of production during this series against Vancouver.

The puck will drop at 9 pm CT, yes, it’s another late game, and will be available on TSN 3 along with 680 CJOB.
Uncategorized
Recent articles from Thomas Hall