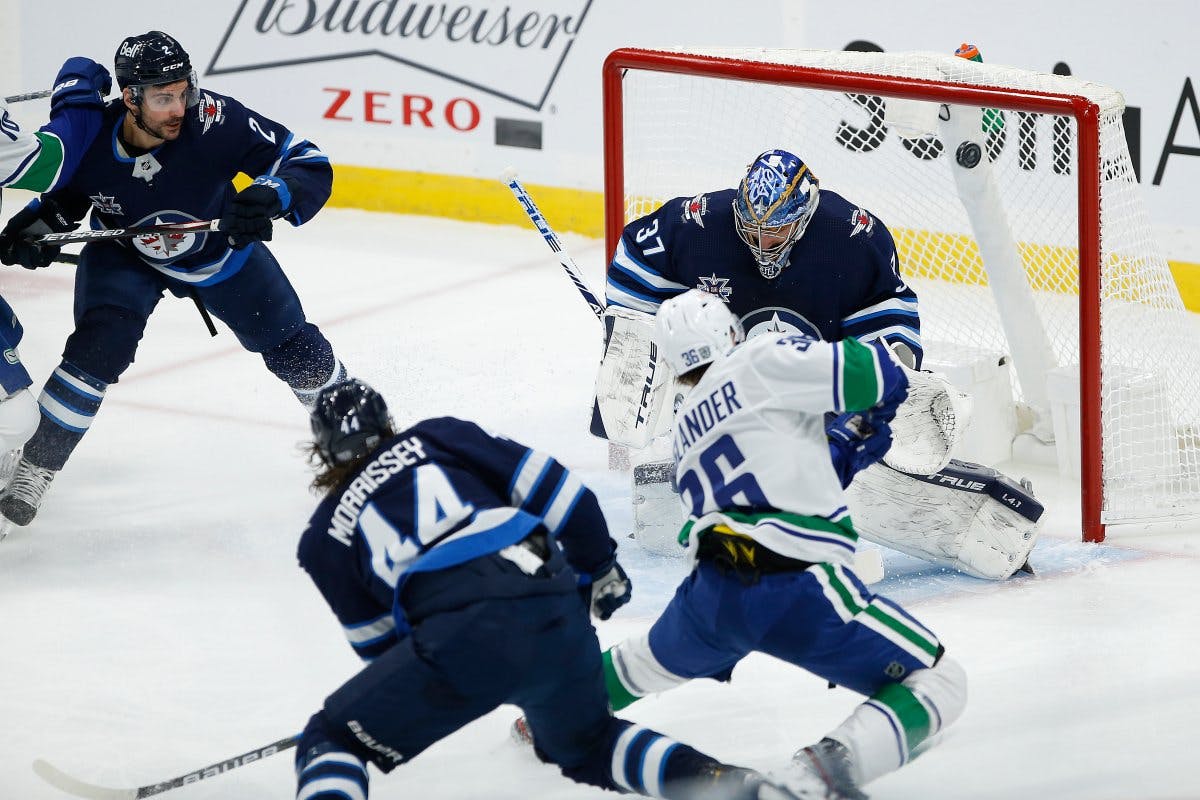 By Thomas Hall
1 year ago
Following a tough 3-2 defeat against the Edmonton Oilers, the Winnipeg Jets have taken their road trip to the west coast and are aiming to get back into the win column against the Vancouver Canucks on Friday night.
Meeting each other for just the second time this season, things certainly didn’t end well for Winnipeg last time out against Vancouver, as they were embarrassed in all three periods and ultimately lost 4-1. But now eight games later, they’ll look to correct those issues and find a way to capture their 10th victory of the 2020-21 campaign.
Here are three storylines that could impact the Jets’ second game of the season against the Canucks:

After missing Wednesday night’s game against Edmonton, forward @Pierre-Luc Dubois traveled with the team to Vancouver in hopes of making his return, however, he didn’t participate in the morning skate and will be watching from the crowd once again. In total, the 22-year-old is now set to miss his fourth consecutive contest and has appeared in just two games since being acquired from the Columbus Blue Jackets on Jan. 23.
Unfortunately, Winnipeg and Dubois still can’t shake this unlucky stretch, which has lasted for nearly a month. As of right now, the former first-round pick’s next chance to return to the lineup will be on Sunday against these same Canucks, but he’ll first need to prove that he’s healthy enough to play.

Similar to Dubois, forward @Nate Thompson, who’s played just four games this season, has also been sidelined due to a lower-body injury, which he suffered back on Jan. 21 against the Ottawa Senators. Since then, it’s been almost a month-long recovery process for him and he’s now ready to suit up with his teammates on game day once again.
Even though Thompson probably could’ve returned to action on Wednesday, coach Paul Maurice opted to keep the team’s fourth line together for one more game, which included @Jansen Harkins, @Trevor Lewis and @Kristian Vesalainen. But with the 36-year-old drawing back into the lineup, Vesalainen will come off the fourth line and serve as a healthy scratch during this contest.

Considering goaltender @Connor Hellebuyck has started in each of the last six games and also seven of the eight matchups this month, there’s no question the Jets needed to rest him and that’s exactly what they’re doing on Friday against the Canucks. Since the 2019-20 Vezina Trophy winner will receive the night off, backup @Laurent Brossoit is slated to make his fourth start of the season, which will also be his first appearance since Feb. 2.
In each of his first three starts of the 2020-21 campaign, Brossoit has appeared in the second game of the club’s back-to-back series, making this game his first outing without having Hellebuyck playing the night before. Through three games this season, the 27-year-old has earned a 2-1-0 record, producing a 2.98 goals-against average and a .918 save percentage.

The puck will drop at 9 pm CT, yes, it’s another late game, and will be available on TSN 3 along with 680 CJOB.
Uncategorized
Recent articles from Thomas Hall