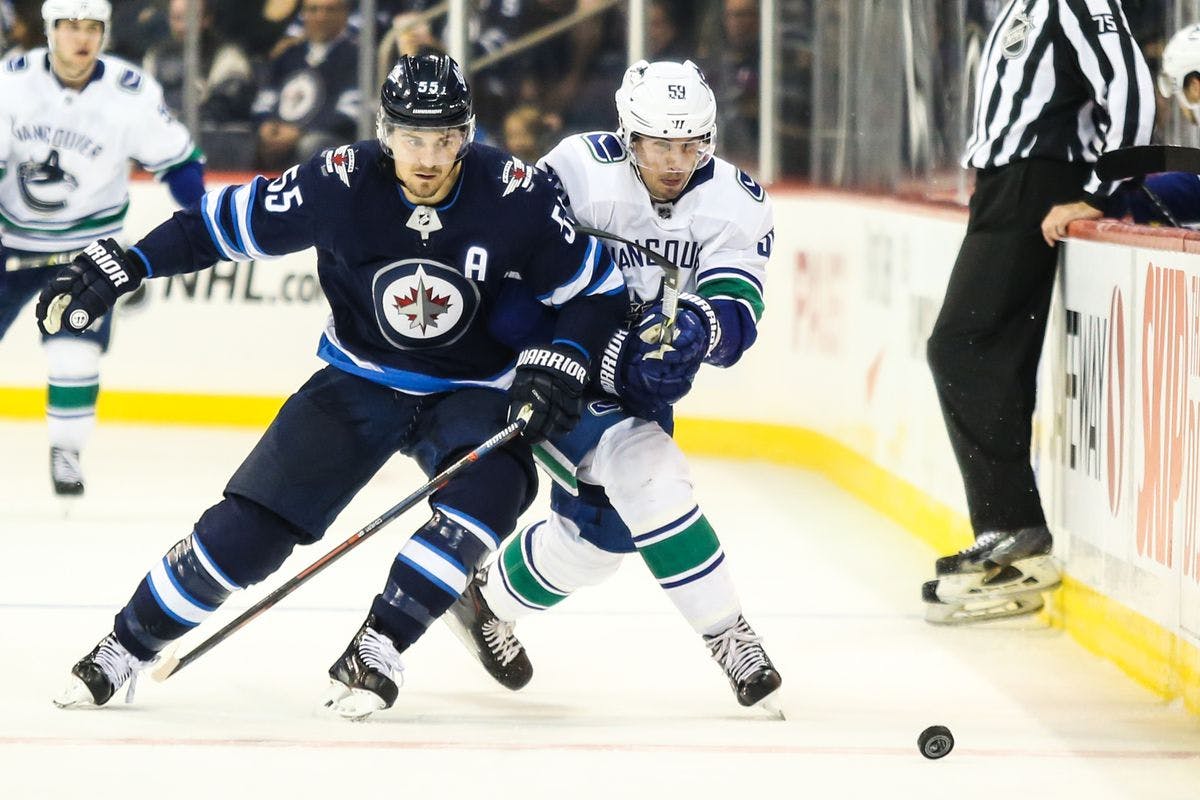 By Thomas Hall
1 year ago
Capping off a six-game slate in nine nights, the Winnipeg Jets scored four goals in the third period against the Edmonton Oilers on Tuesday night, resulting in a 6-4 win and allowing them to enter their mini bye week on a positive note.
Through seven games, Winnipeg has come away victorious five different times – including a pair of overtime victories. As they approach the conclusion of the first month of the season, which has been fairly successful for this team, they’ll be aiming to extend their current winning streak to two games.
Here are three storylines that could impact the Jets’ eighth game of the season against the Canucks:

1. Rust Could Be a Factor During First 20 Minutes

After playing six games in nine nights, the Jets received some much-needed time off following their victory over the Oilers on Tuesday, as they earned the next three days off and practiced twice during that span. Now coming out of that break, it’s possible this team may experience some rust in the opening period on Saturday night, which would certainly be less than ideal.
Considering the Canucks are currently tied for the most goals scored (10) in the first period, they’ll likely be looking to come out firing once again during this Saturday night matchup, meaning goaltender @Connor Hellebuyck could face plenty of shots in the first 20 minutes of this game. With this in mind, the 2019-20 Vezina Trophy winner will need to bail out his teammates, which he’s done several times before, if they fall flat out of the gate when the puck drops.

While Winnipeg’s second line took a massive hit when forward @Patrik Laine, who’s now been traded to the Columbus Blue Jackets, suffered an upper-body injury shortly after the regular season opened, however, teammates @Nikolaj Ehlers, @Paul Stastny and @Andrew Copp have all stepped up in a massive way since then.
Over the last five games, that trio has produced 11 goals, 25 points and 50 shots on net – including four goals, 10 points and 10 shots on net last game against Edmonton. Since Saturday’s matchup could develop into a high-scoring affair, especially since Vancouver has potted at least four goals in each of their last three games, it’ll be extremely important for this second line to continue producing at a high level.

Though the Canucks have recently corrected their early-season scoring woes, they’re still allowing far too much pressure on their goaltenders this season, which is something the Jets know all too well about. As a result of these issues, they’re currently allowing the most shots on net per game (37.1) and the seventh-most goals per game (3.60) among all 31 teams in the league.
In particular, goaltender @Thatcher Demko has recently taken over the starting gig and is slated to start between the pipes on Saturday, which will be his sixth start of the season. But considering he’s faced 40 shots or more in three of his five appearances in 2021, Winnipeg shouldn’t have any issues creating plenty of scoring chances throughout all three periods of this showdown.

The puck will drop at 9 pm CT on Saturday and will be available on CBC along with 680 CJOB.
Uncategorized
Recent articles from Thomas Hall