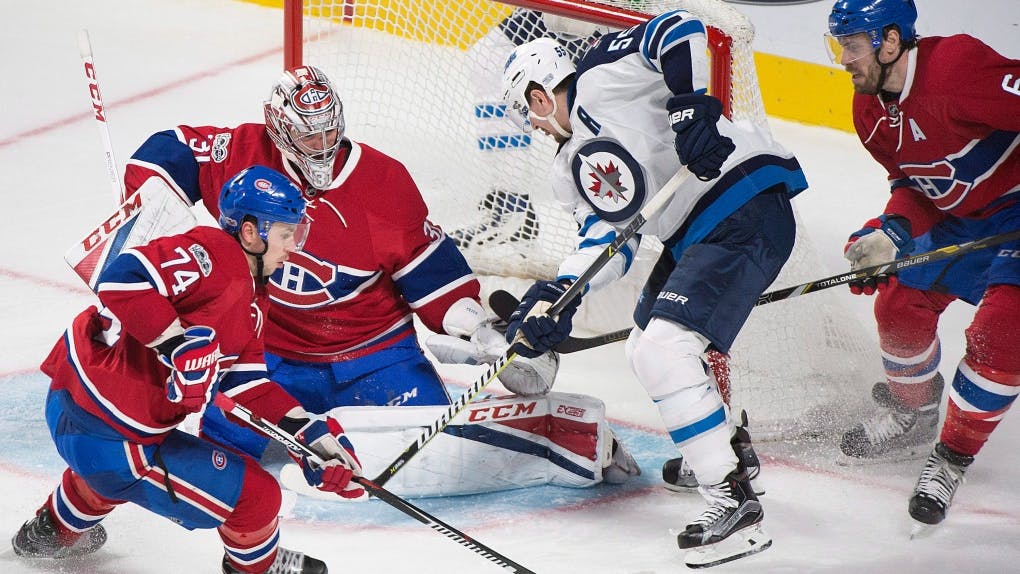 By Thomas Hall
1 year ago
Following a thrilling 4-3 overtime victory over the Vancouver Canucks on Sunday, the Winnipeg Jets flew back home and earned a well-deserved three-day break, however, they’re now scheduled to play four games in six nights beginning on Thursday against the Montreal Canadiens.
It may be hard to believe, but over 30 percent of the 2020-21 campaign has already been completed, and yet, this will be just the first meeting of the season between Winnipeg and Montreal. Considering these two teams combined for 13 goals in two showdowns last season, it’s certainly possible this matchup could prove to be another high-scoring affair.
Here are three storylines that could impact the Jets’ first game of the season against the Canadiens:

After suffering an upper-body injury during Sunday’s contest, defenseman @Tucker Poolman was forced to leave the game early and has been attempting to recover from this ailment over the last few days, although it appears he’ll require a little bit more time off. Though he participated in the morning skate on Thursday, the Jets are deciding to be cautious with the veteran blueliner and will keep him out of the lineup against the Canadiens.
Since Poolman has been paired with teammate @Josh Morrissey this season, @Nathan Beaulieu will move up from the club’s third defensive pairing and will fill in alongside the 25-year-old blueliner on Thursday night. As for who will fill Beaulieu’s spot, defenseman @Sami Niku, who hasn’t played since Jan. 19, will draw back into the lineup and is slated to be paired with veteran @Dylan DeMelo on the third defensive pairing.

In a surprising move made on Wednesday, the Canadiens fired coach Claude Julien, who’s served as the team’s head coach since 2017, and announced that assistant coach Dominique Ducharme will become the interim head coach for the time being. While making a coaching change just 18 games into the season may seem premature for some, it’s a move the players were reportedly on board with and it could provide this roster a much-needed spark during this matchup against the Jets.
Taking into account that Montreal is tied for the fifth-most goals scored (19) in the first period this season, there’s a very strong chance they could come out strong in the first 20 minutes and apply plenty of pressure on goaltender @Connor Hellebuyck. Since Winnipeg has been prone to slow starts in 2021, as they’re tied for the sixth-most goals allowed (17) in the first period this season, it’ll be crucial for them to match their opponent’s level of intensity during this first meeting of the 2020-21 campaign.

Thanks to the COVID-19 pandemic, there won’t be any All-Star festivities this season, and rightly so, although that hasn’t stopped forward @Mark Scheifele, who currently leads the team in points (26), from performing at an All-Star level through the first third of the 2020-21 campaign. Serving as one of the Jets’ top offensive weapons, the 27-year-old has only been held pointless in two games so far and is currently riding a 10-game point streak, which is tied for the longest of his career.
Similar to the 2015-16 campaign, where Scheifele finished the season on a 10-game point streak, the two-time All-Star is enjoying another impressive hot streak, resulting in seven goals and 16 points over the last 10 games. If the former first-round pick registers at least one point on Thursday, he’d set a new career-high and would also tie former Atlanta Thrasher Marian Hossa for the longest point streak in WPG/ATL history.