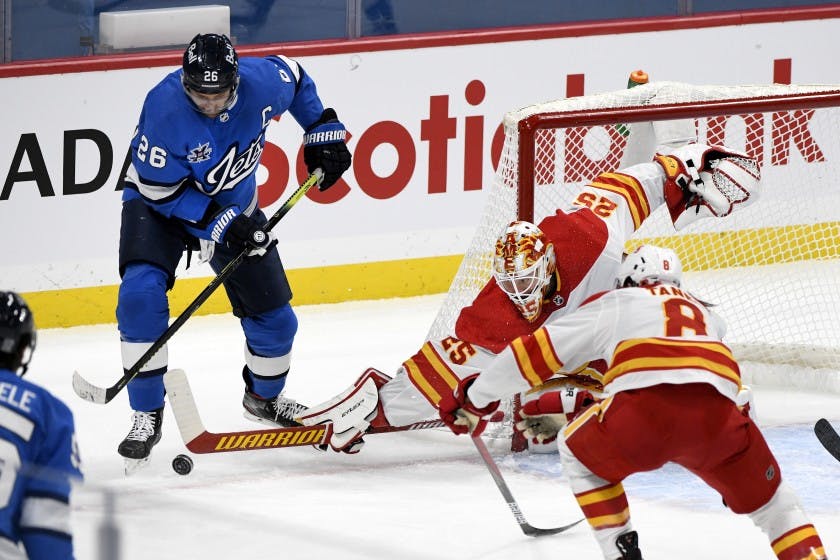 By Thomas Hall
1 year ago
After completing a two-game series sweep of the Vancouver Canucks, the Winnipeg Jets are continuing to play the role of road warriors with the next stop on their current seven-game road trip taking place in Calgary against the Flames.
Through five games this season, Winnipeg owns a 3-1-1 record against Calgary and hasn’t faced off against them since Feb. 9, which feels like ages ago at this point. Nevertheless, this team is now scheduled to play three straight games against the “C of Red” and two of those games will occur over the next two nights.
Here are three storylines that could impact the Jets’ back-to-back series against the Flames:

With the Jets slated to play their seventh game in 12 nights on Friday, fatigue could become a major factor during this back-to-back series against the Flames, meaning it’d make plenty of sense to rest some of their skaters Saturday night. While all of the top six forwards will probably suit up for both of these games, it’s possible coach Paul Maurice could decide to rest some of the bottom six forwards, particularly players like @Nate Thompson, @Trevor Lewis and @Mathieu Perreault.
Considering forward @Jansen Harkins hasn’t played since Feb. 19, this could be the perfect time to reinsert him back into the lineup, allowing the 23-year-old to showcase his skills for the first time in over a month. Along with the young center, defenseman @Sami Niku, who last played on Mar. 1, could also potentially earn some playing time this weekend, especially since veteran @Tucker Poolman has logged at least 19:00 minutes of ice time in each of the last two games.

In an attempt to preserve goaltender @Connor Hellebuyck for the long haul, Maurice has already announced the 2019-20 Vezina Trophy winner will only be starting the first game of this back-to-back series, allowing backup @Laurent Brossoit to make his eighth start of the campaign Saturday night. Considering Hellebuyck is slated to play his fourth consecutive game in seven nights, this was definitely the right call to make and this move should help keep him fresh down the stretch.
Though Brossoit has faced less than 25 shots in each of his last two starts, Calgary created 31 shots against him back on Feb. 2, although the 28-year-old still earned his third career victory against the organization that drafted him in the sixth round back in 2011. Performing to a 2.43 goals-against average and a .920 save percentage through eight games in 2021, the impending free agent will be attempting to continue his impressive performance in what could possibly be his final season in Winnipeg.

While the addition of coach Darryl Sutter has transformed the Flames into a more defensive-minded team, his presence hasn’t made any significant impact on the offensive aspect of their game, as they’ve scored the second-fewest number of goals per game over the last three games, according to NHL.com. Digging deeper into their recent scoring woes, the majority of their shots have come from the point during this stretch, meaning they’ve struggled to create high-quality scoring chances.
With this in mind, it’ll be extremely important for the Jets to use this information to their advantage over the next three games, making it a priority to keep their opponent out of the middle of the ice and forcing them to take plenty of shots at the blue line. If they’re able to achieve this goal, chances are these next couple of contests will prove to be grinding and low-scoring affairs, which is certainly something Maurice would be in favor of.

The puck will drop at 9 pm CT for both games, remember to sleep in Saturday morning. Friday’s game will be available on TSN 3 and Saturday’s game will be featured on CBC/SN. Both games can be heard on 680 CJOB.
Uncategorized
Recent articles from Thomas Hall