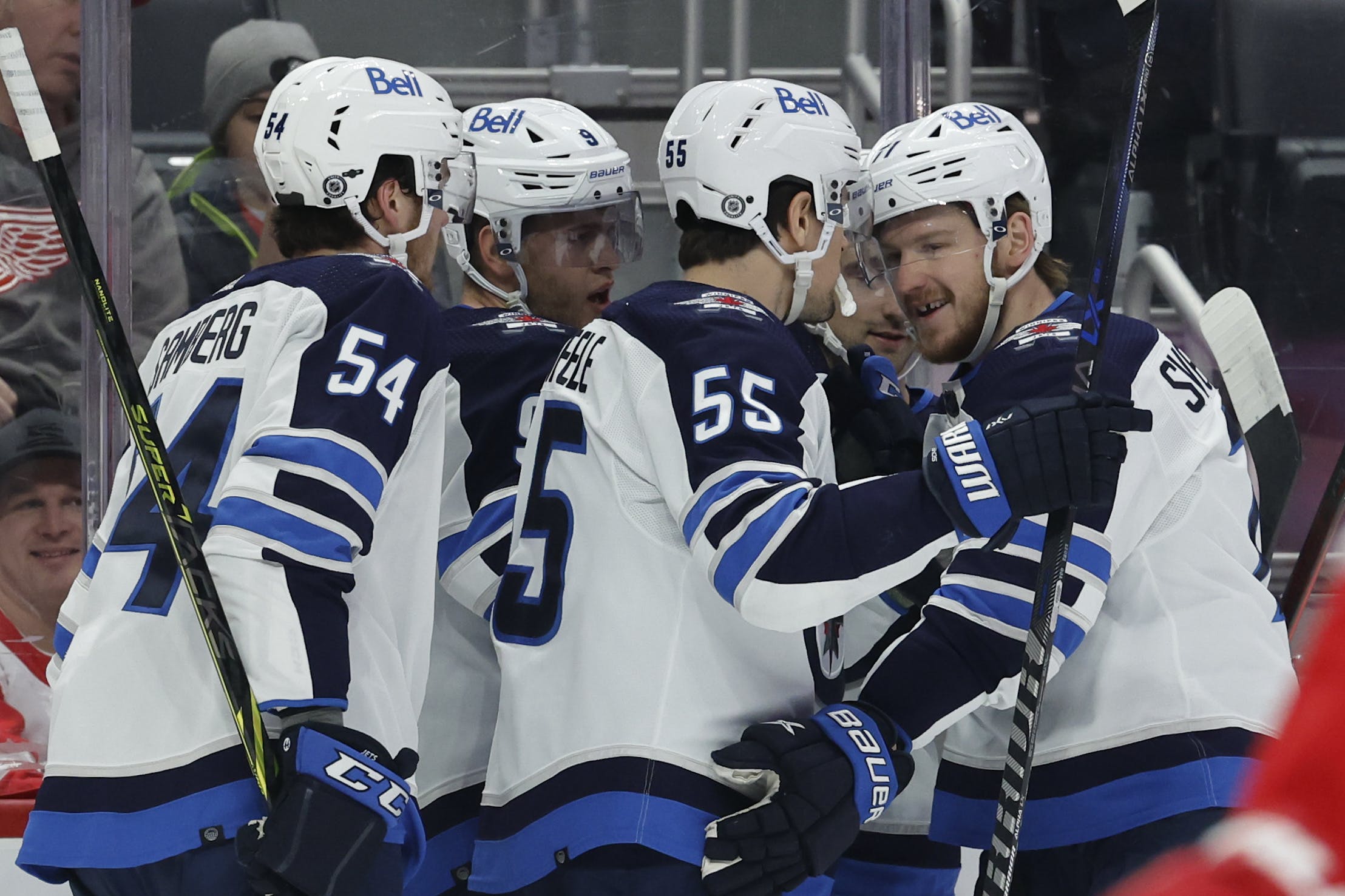 By Thomas Hall
10 months ago
Following another extended layoff, the Winnipeg Jets returned to action for the first time in a week and despite missing several regulars due to COVID-19, they persevered and came away victorious against the Detroit Red Wings.
While it wasn’t easy, the Jets wired a pair of shots past goaltender @Alex Nedeljkovic, who was still able to stop 29 of his 31 shots against. With this team controlling a 2-0 lead heading into the third period, not even a late surge from the Red Wings could prevent them from earning a 3-0 victory, which came courtesy of an empty-net goal from @Kyle Connor.
As for which skaters shined during this tilt, here are the three stars of the game from Winnipeg’s 17th win of 2021-22:

Stat Line:
Two goals, four shots on goal, one block, one takeaway, 21:36 minutes
Performance:
With forwards @Nikolaj Ehlers and @Paul Stastny out of the line-up due to COVID-19, the Jets needed someone to step up in their absences and @Andrew Copp did just that against the Red Wings on Thursday.
Serving as the club’s primary source of offence, Copp, who’s a native of Michigan, was responsible for scoring the game’s first two goals – his ninth and 10th on the season. In particular, the 27-year-old put his impressive geometry skills to use during his first marker of the game, which saw him fire a puck above Nedeljkovic’s right shoulder from below the red line.
If not for a few unlucky bounces, particularly one that occurred while on a 2-on-1 rush with teammate @Mark Scheifele, Copp could’ve easily registered his first hat-trick of 2021-22. Nevertheless, he’ll definitely settle for his two-goal performance in a winning effort in front of plenty of friends and family.

Stat Line:
One assist, five blocks, three hits, 17:52 minutes
Performance:
Making his NHL debut, this contest against the Red Wings was already slated to be a memorable night for rookie @Dylan Samberg, but thanks to his outstanding effort, the 22-year-old left a lasting impression on everyone in attendance.
Less than six minutes into the opening frame, the 6’3″ blueliner wasted no time registering his first NHL point as he factored in on Copp’s first of two goals on the night. Along with cracking the score sheet, the former second-round selection also didn’t shy away from sacrificing his body when needed, especially on the penalty kill, where he posted all five blocks.
Between his effective puck-moving, decision making, offensive moments and downing a mustard packet on the bench, Samberg proved he was every bit ready for the NHL. Let’s see if it earns him another game at the highest level of competition.

Stat Line:
Stopped all 33 shots against, 26th career shutout
Performance:
Appearing in his seventh straight contest, albeit, just his fourth of January, goaltender @Connor Hellebuyck enjoyed a fairly quiet night through the first two periods but where he made his presence felt was in the final frame.
After facing just 16 shots over the first 40 minutes, with Detroit attempting to claw back into this game, the 28-year-old netminder was peppered with 17 shots against during the final 20 minutes of regulation. Making his job even tougher, Winnipeg took a pair of penalties with under five minutes remaining in regulation, handing their opponent a 5-on-3 power play, which quickly turned into a 6-on-3 after pulling Nedeljkovic.
Despite all that, Hellebuyck stood tall, made some impressive saves – one with his right shoulder on a wrister from @Tyler Bertuzzi – and kept his opponent scoreless.
Suffice to say, it was a night to remember for all three (Copp, Hellebuyck, Connor) Michigan men.
Uncategorized
Recent articles from Thomas Hall