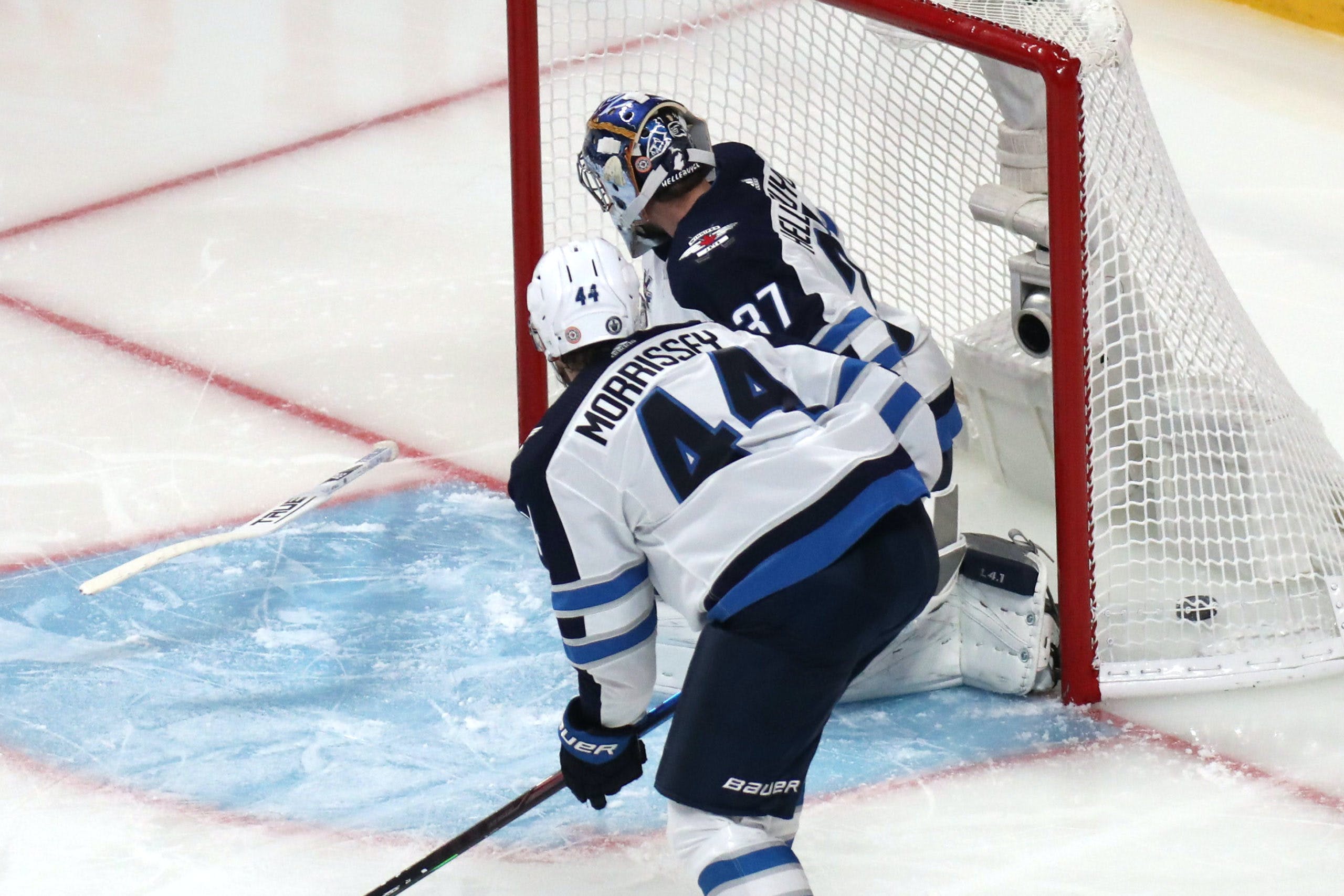 By Thomas Hall
1 year ago
After being swept in the second round by the Montreal Canadiens, the Winnipeg Jets saw their 2020-21 season come to an end and after flying back to Bell MTS Place on Tuesday, it was time for the dreaded locker room cleanout Wednesday morning.
Considering this team is coming off a disappointing playoff series, which saw them lose four straight games, everyone was understandably a little sour when speaking to the media. Having said that, these end-of-season press conferences still provided plenty of interesting storylines for what should be a fairly busy off-season.

Continuing the unpopular occurrence of hiding injuries until the playoffs conclude, which is something every organization participates in, coach Paul Maurice and the Jets were unwilling to reveal any injuries during this past postseason but all that changed on Wednesday. In particular, defenseman @Dylan DeMelo confirmed he suffered a groin strain in Game One against the Canadiens, although he was optimistic about returning if the series had continued.
Along with DeMelo, forward @Nikolaj Ehlers also discussed his injury history and revealed he sustained a torn labrum in his shoulder earlier in the season, which worsened as the year progressed. In addition, the 25-year-old also suffered a broken rib, although he was fully healthy through the team’s playoff run.
As for captain @Blake Wheeler, who battled back from a concussion and a few fractured ribs during the regular season, he hinted at potentially needing surgery during this off-season but didn’t specify what type of injury he’s dealing with. So we’ll have to wait and see if something transpires in that department this summer.
Since forward @Pierre-Luc Dubois didn’t look like his normal self in the playoffs, there was some discussion about whether he was dealing with an injury himself and just didn’t want to admit it. But when the 22-year-old spoke to the media, he was adamant about not being seriously hurt and said “nothing major” affected his game, at least injury-wise.

Following a vicious hit on forward @Jake Evans in Game One, @Mark Scheifele was handed a four-game suspension that ultimately prevented him from returning to the series against Montreal. At the time, the 28-year-old didn’t agree with the length of his discipline and believed it was a little too harsh. Now one week later, the 6′ 3″ center is still echoing those same beliefs.
Though there could be an argument to be made about the length of Scheifele’s suspension, the former first-round pick remains extremely frustrated about the final decision and blames the league’s Player Safety Department for taking him out of this series. After preparing for a difficult matchup against forward @Phillip Danault, the Jets’ top-line center admitted he was very disappointed that he couldn’t help his team fight off elimination.
Along with criticizing the NHL, Scheifele also displayed plenty of support for Maurice and spoke about his club’s determination to prove everyone wrong all season long. Despite being counted out numerous times in 2021, the right-hander is extremely pleased with the way he and his teammates responded to those same doubters, allowing them to thrive in the underdog role.

Looking ahead to the upcoming off-season, Winnipeg’s front office will likely have a ton of difficult decisions to make, including the impending restricted free-agent statuses of both @Andrew Copp and @Neal Pionk. Adding to the level of difficulty, both of these skaters are coming off productive performances and will each be arbitration-eligible, which could complicate things for general manager Kevin Cheveldayoff.
Starting with Pionk, the 25-year-old admitted he’s still “decompressing” and isn’t focusing on his next contract just yet, although he’s planning to speak to his agent about it in the near future. Comparing his time in Winnipeg to his tenure with the New York Rangers, the former undrafted free agent credited Maurice and his staff for helping him improve his confidence over these last two seasons, which is something he lacked earlier in his career.
As for Copp, who had an arbitrator award him his current two-year contract back in 2019, he also isn’t focused on his impending free-agent status right now and is extremely confident things will get sorted out between his agent and management very shortly. Referencing his development over the past two seasons, the 26-year-old explained how he “wouldn’t change a thing” and believes he’s capable of taking his game up to another level moving forward.

After coming over in a trade from the Las Vegas Golden Knights last off-season, forward @Paul Stastny was originally expected to skate alongside winger @Patrik Laine, which ironically only lasted for one game before he was acquired by the Columbus Blue Jackets. Though the 35-year-old spent time at multiple positions and bounced around the top-two lines, he still ended up serving as a quality player and helped create plenty of havoc around the net.
Given his age, along with the fact that he earned $6.5 million this past season, Stastny is prepared to take his time with his next contract this summer and isn’t planning to rush into anything out of desperation. With that in mind, the former second-round pick will ultimately decide what’s best for his family and is potentially open to returning to the Jets next season.
Similar to Stastny, veteran @Nate Thompson will also be searching for a new contract this summer after centering Winnipeg’s fourth line throughout the 2020-21 campaign, which also saw him serve as a penalty killer as well. Even at 36-years-old, the bottom-six center isn’t ready to hang up his skates just yet and is hopeful to land on his feet, whether that’s with the Jets or somewhere else.
Jets News
Recent articles from Thomas Hall