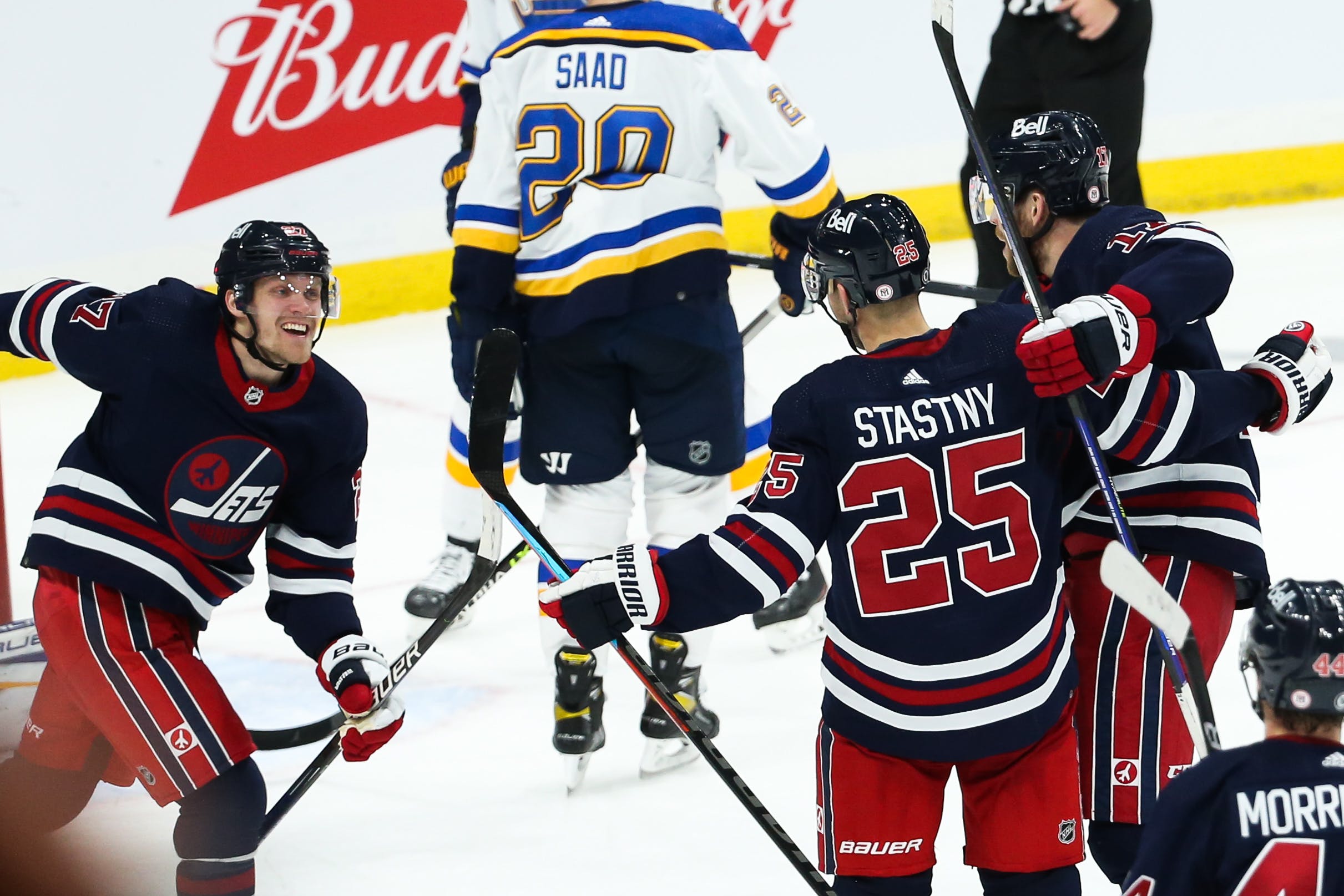 By Thomas Hall
11 months ago
After losing the inaugural game in the Dave Lowry era, the Winnipeg Jets were determined to earn their new head coach his first victory in the National Hockey League on Sunday, and that’s exactly what they did against the St. Louis Blues.
Following a quiet opening period, the intensity between these two teams increased dramatically in the middle frame, beginning with forward @Nikolaj Ehlers’ 12th goal of the season. Though @Vladimir Tarasenko tied this contest 1-1 at the 13:47 mark, just three minutes later, @Mark Scheifele connected for his eighth goal of 2021-22, regaining Winnipeg’s one-goal lead.
Shortly after the third period began, @Paul Stastny extended his team’s advantage even further by notching his sixth goal on the campaign. With the Jets on the power play later in the final frame, @Niko Mikkola tapped in a shorthanded marker, trimming the Blues’ deficit to just one goal with just over five minutes remaining in regulation.
Luckily, only 16 seconds passed before Stastny answered right back with his second score of the game, securing Lowry’s first NHL win as a head coach.
For an extended recap of this showdown, here are three takeaways from the Jets’ 4-2 victory over the Blues:

Appearing in his 1,023rd career game in the NHL, Stastny certainly won’t forget his impressive performance against St. Louis any time soon as he reached the 500th assist mark during this afternoon affair.
Earning a secondary assist in the second period, the 35-year-old received the puck as he entered the offensive zone and then shovelled it down behind the net to Scheifele. Soon after, No. 55 fed possession into the slot, allowing Ehlers to blast his shot past Blues goaltender @Jordan Binnington.
In classy fashion, Ehlers knew exactly what milestone his teammate had just accomplished and quickly grabbed the puck out of the net before handing it off to the Jets’ training staff for authentication.
Adding to his memorable night, Stastny also enjoyed a two-goal performance – one of the power play and one at 5-on-5 – helping him register his first three-point showing of the season.
Most notably, his biggest play of the game came at the 14:44 mark of the third period, where he just narrowly snuck his shot between the post and Binnington’s right pad, resulting in his second marker of the night. Without this play, Winnipeg would’ve been forced to defend a one-goal lead through the final five minutes of regulation.

Along with Stastny’s strong performance, linemates Scheifele and Ehlers also made large impacts during this matchup against the Blues, as their chemistry continued to grow for a second straight contest.
In their second game since being paired together, this talented duo put on a fantastic offensive showing Sunday, where they each registered at least one goal and one primary assist at 5-on-5. Additionally, this one-two punch also generated a Corsi For Percentage and an Expected Goals For Percentage of at least 55 per-cent during those same situations, according to NaturalStatTrick.com.
In particular, this connection was best displayed in the second period, starting with the game’s opening goal.
After Scheifele received a pass down low from Stastny, he didn’t waste any time locating Ehlers in front of St. Louis’ net and sent a backhand pass his way. As soon as the puck hit his stick, the Danish superstar one-timed his shot farside on Binnington, handing his team a 1-0 lead.
Later in the middle frame, Ehlers prevented the puck from exiting the offensive zone by intercepting it along the boards and thanks to his stellar hockey awareness, he transformed this turnover into an instant goal. Shortly after gaining possession, the 25-year-old saw Scheifele skating into the slot and perfectly sent him a cross-ice pass, allowing No. 55 to make this game 2-1 in favour of Winnipeg.
While this duo has only been together for two games, at this point, there’s no doubting they’ve already formed a significant amount of chemistry in such a small sample size, which is expected to grow even further in future contests.

With forwards @David Gustafsson and @Evgeny Svechnikov unavailable due to separate injuries, the Jets were forced to call upon some reinforcements for this contest against the Blues, clearing the path for prospect @Kristian Reichel to make his NHL debut.
Coming into the league as an undrafted free agent, this recent promotion was a dream come true for the 23-year-old, who signed an entry-level contract with Winnipeg in June 2020. Even though it’s taken the 6’0″ forward a year and a half to reach the highest level of competition, he can now relish in the moment of doing just that in a winning effort over St. Louis.
Granted, Reichel only received six shifts in this matchup, resulting in just 4:27 minutes of ice-time. But with Svechnikov expected to miss extended time, along with captain @Blake Wheeler’s injury status, the right-hander is likely to remain with the big club in the short term, assuming this team resumes play on Dec. 27, of course.
Uncategorized
Recent articles from Thomas Hall