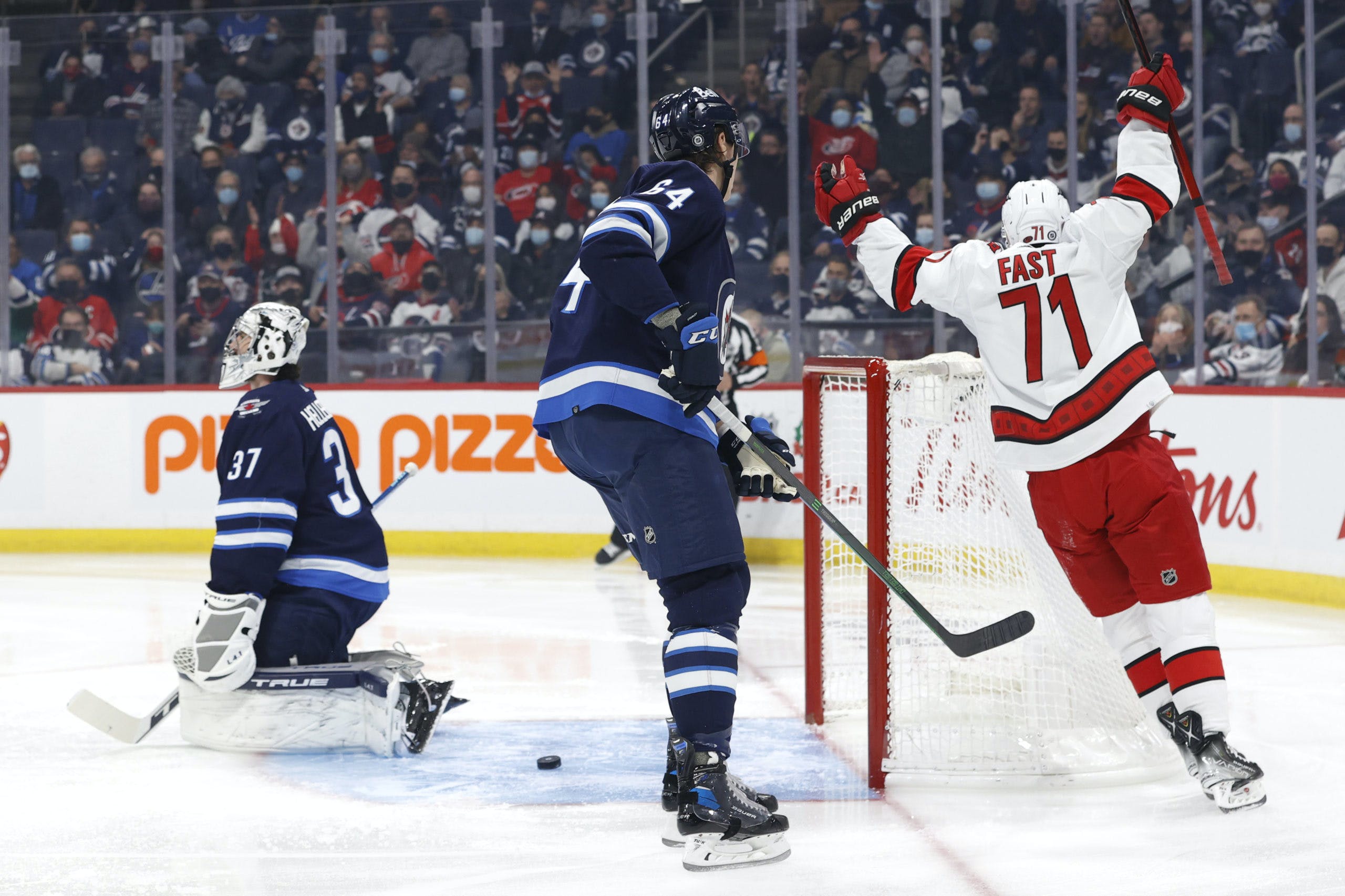 By Thomas Hall
11 months ago
Well, that two-game winning streak was fun while it lasted, right?
Following the madness that was Sunday’s showdown between the Toronto Maple Leafs and Winnipeg Jets, this team’s four-game homestand concluded Tuesday as they welcomed the Carolina Hurricanes to town. But unlike last game, the home club struggled to keep pace with its opponent nearly all game long.
Starting flat out of the gate, the Jets couldn’t clear the puck out of the defensive zone, ultimately leading to an unassisted goal from defenceman @Jacob Slavin, providing the Hurricanes with a 1-0 lead just 30 seconds in. Then in the second period, it took them less than two minutes to extend their advantage to 2-0, as forward @Sebastian Aho scored a controversial goal in front of the net.
Luckily, Winnipeg answered back with a pair of goals of its own, courtesy of @Nikolaj Ehlers and @Pierre-Luc Dubois, tying the game at 2-2 with less than four minutes remaining in the middle frame. But with just 20 seconds left, a power-play marker from @Martin Necas allowed Carolina to regain its one-goal edge before the second intermission.
Once the Hurricanes added a second straight power-play goal, thanks to @Vincent Trocheck, they were able to easily put this contest away in the third period, defeating the Jets by a score of 4-2.
As for what stood out throughout this matchup, let’s explore three takeaways from Winnipeg’s ninth regulation loss of the season.

With defenceman @Neal Pionk unavailable due to his two-game suspension and concussion, the Jets were forced to reshuffle their defensive pairings ahead of this contest against the Hurricanes, which saw them promote @Logan Stanley to the top four.
Joining teammate @Brenden Dillon on the second pairing, Stanley was tasked with skating on his off-side and, unfortunately, that gameplan didn’t prove to be successful. Appearing extremely uncomfortable on the right side, the 23-year-old was caught playing out of position numerous times and played a huge factor – in a negative way – in two of the four goals against.
In the opening period, shortly after Dillon saved a goal by clearing a loose puck out of the crease, Stanley couldn’t advance the play into the neutral zone and ultimately gave possession back to Carolina. As a result of this turnover, Slavin regained the puck at the point and eventually wired his shot home for the game’s first goal.
Jumping ahead to the final 20 minutes, with Winnipeg on the penalty kill, Carolina’s skaters cycled the puck around and created a pair of quality scoring chances. During one of the ensuing rebounds, the towering 6’7″ blueliner couldn’t jump on the loose puck nor box out in front, allowing Trocheck to tap in his club’s fourth marker on the night.
Adding to his disappointing performance, in the second period, Stanley decided to pinch along the boards in the neutral zone and attempted to battle for possession. After failing to come away victorious, the Hurricanes broke out on an odd-man rush, thankfully, Dillon defused this situation with an incredible diving poke check in the defensive zone.
Looking ahead to the upcoming back-to-back series, perhaps this one-game sample will serve as a clear indicator that Stanley is better suited on his strong side and the third pairing as well.

Making his eighth consecutive start – a streak that’ll likely end later this week – goaltender @Connor Hellebuyck probably didn’t anticipate being heavily relied on soon after puck drop, and yet, that’s exactly what transpired Tuesday.
Facing plenty of pressure early on, Hellebuyck was peppered with 15 shots against in the opening frame, including 10 high-danger scoring chances, all of which came at 5-on-5. Since his teammates couldn’t limit the Hurricanes’ time of possession, the 6’4″ netminder didn’t receive much support and was forced to make numerous high-pressure saves before the first intermission.
Despite his best efforts, especially while shorthanded, the two-time all-star ended up allowing four goals on 34 shots against in this contest. Having said that, based on his 4.58 expected goals against, very little blame, if any at all, should be directed at the 2019-20 Vezina Trophy winner for this losing performance.
If not for Hellebuyck, the Jets likely would’ve lost by far more than just two goals, which is usually the case whenever the Michigan native starts in goal.

Coming into this showdown, Winnipeg had created at least nine high-danger chances at 5-on-5 in each of its previous three games. But against Carolina, locating open ice with five skaters on the ice was an obstacle this team failed to overcome.
In the first period alone, the Jets were largely pinned down in their own zone for the majority of the first 20 minutes of play, leading to 10 high-danger chances for their opponent. As for themselves, they could only muster up one scoring chance of that variety during all situations, making for a very frustrating opening frame.
It wasn’t until some 4-on-4 action commenced in the second period, thanks to penalties from @Jansen Harkins and Trocheck, that this team started to advance the puck up the ice effectively. In turn, an impressive stretch pass from @Nate Schmidt sprung @Paul Stastny and Ehlers on a 2-on-1 rush, leading to No. 27’s 10th goal of 2021-22.
Even after that marker, Winnipeg’s skaters still couldn’t enter the offensive zone cleanly the rest of the way, at 5-on-5 or with the man advantage. As a result, despite receiving a five-minute power play almost midway through the third period, this club was held to just two shots on goal during that span, virtually putting an end to their comeback hopes.
With a day off before heading out to the Pacific Northwest, it’ll be crucial for the Jets to improve their offensive zone entries and retrievals or else their scoring woes are likely to continue into next week.