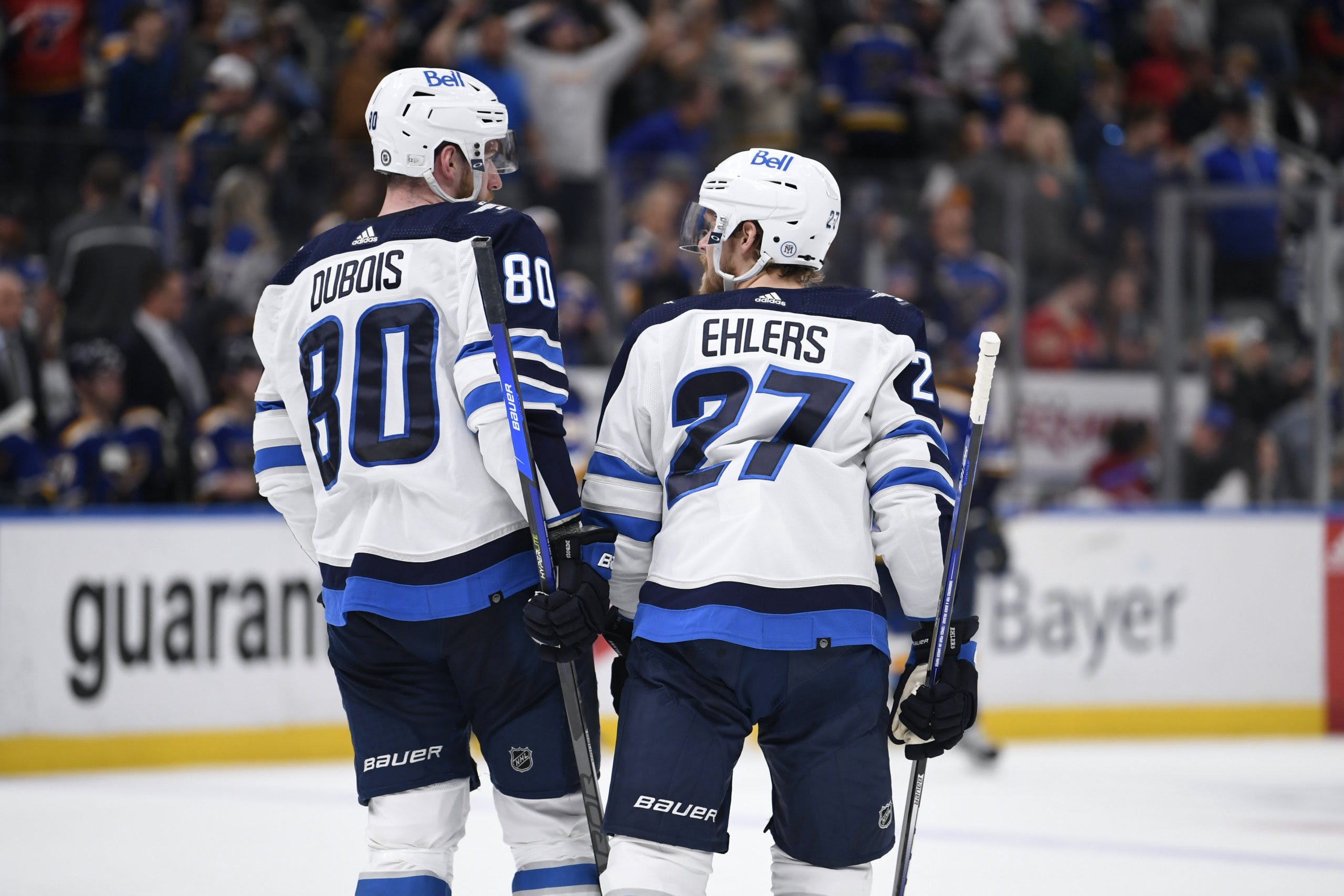 By Thomas Hall
8 months ago
With two valuable points on the line, the Winnipeg Jets desperately needed to come away with another victory over the St. Louis Blues on Sunday, while it was far from perfect, they did so beyond regulation.
Finishing the opening period on a sour note, after forward @Evgeny Svechnikov was handed a two-minute slashing penalty and a questionable 10-minute misconduct, the Blues capitalized on their opportunity by breaking this tie score. As a result, they entered the middle frame with a one-goal edge.
Thankfully, the Jets answered back with a goal of their own midway through the second period, courtesy of @Nikolaj Ehlers. Despite tying the score at one goal apiece, this club couldn’t keep its opponent off the scoreboard through the remainder of the period as @Vladimir Tarasenko potted a late goal – something that also proved vital near the end of regulation.
Following a pair of goals from forwards @Kyle Connor and @Mark Scheifele, Winnipeg controlled a 3-2 lead in the third period and appeared poised to maintain this advantage through the rest of the way. Unfortunately, a defensive breakdown allowed @Brayden Schenn to score the game-tying goal at the 17:49 mark, ultimately pushing this contest to overtime.
Calling upon three of their best forwards, interim coach Dave Lowry repeatedly sent out a lethal combination of @Pierre-Luc Dubois, Connor and Ehlers in the extra frame, which eventually paid off as this unit connected on a beautiful game-winner.
For an extended recap, here are three takeaways from the Jets’ critical 4-3 overtime victory against the Blues:

Throughout this season, fans have only seen glimpses of the Jets’ nuclear line – including Connor, Dubois and Ehlers – and though that was no different Sunday, everyone received another taste of how potent this trio can be if left together.
Once Svechnikov headed to the penalty box, it didn’t take long before the coaching staff bumped Ehlers up to the second line, positioning him next to Nos. 81 and 80. As most have come to expect, shortly after this trio was reunited, it found a way to crack the score sheet in a highlight-worthy fashion.
Showcasing his quickness, Connor impressively backchecked to break up a line rush in the defensive zone and quickly ushered the puck up the ice to his teammates. There, Dubois and Ehlers embarked on a lethal 2-on-0 rush, with the Danish superstar one-timing his 15th goal of 2021-22 past Blues goaltender @Jordan Binnington.
Later in the game, this explosive line found the back of the net once again, this time in the third period, as defenceman @Neal Pionk intercepted a pass in the offensive zone before quickly passing to Connor, who blasted home his 37th marker of the season.
If two even-strength goals weren’t enough, we also saw these forwards put a wrap on this Central-Division showdown, resulting in Dubois’ fourth game-winning goal of the year.
Altogether, this newly-formed trio could compete as one of the best forward lines in the NHL, of course, if they remain together. For now, it doesn’t seem like they’ll have to worry about being broken up in the short term.

Missed Opportunites are Beginning to Pile Up

Winnipeg received plenty of offence at even-strength from Connor, Dubois and Ehlers on Sunday, however, this team continued its recent woes on the power play in St. Louis.
Even though only a pair of infractions were called against the Blues, both of them occurred around the same time, which provided the Jets with a brief 5-on-3 advantage in the first period. Despite receiving this golden opportunity, they couldn’t capitalize on it and failed to register more than two shots on goal – only one of them was of the high-danger variety.
Soon after Winnipeg’s power play expired, St. Louis’ skaters made sure not to waste their own chance with the man advantage, as forward @David Perron opened the scoring with his 17th goal of the campaign. Sadly, this wasn’t just an isolated incident either.
Over the last week, this franchise has only converted on two of its 14 power-play chances, resulting in a miserable 14.3 per-cent clip. In comparison, this percentage currently ranks 10th-worst among all 32 clubs in the league, according to NHL.com.
For the most part, this ineffectiveness can largely be directed to a lack of movement, involving both passing and skating, while on the power play. Taking this a step further, the majority of these concerns have only been displayed by the first man-advantage unit – featuring @Mark Scheifele, @Blake Wheeler, @Josh Morrissey, Dubois and Connor.
On most occasions, this group becomes far too stationary in the offensive zone, allowing opposing defences to play aggressively while short-handed. Before any playoff surge can begin, vital adjustments to the power play must be made, although doing so this late into the season could be quite difficult.

It’s a tale as old as time, protecting a one-goal lead is something the Jets can rarely execute without enduring a disastrous outcome. Repeating history once again on Sunday, this team blew a 3-2 edge late in regulation, pushing this contest into overtime.
Luckily, Winnipeg escaped defeat as Dubois ultimately registered the game-winner in extra time. That being said, his clutch performance couldn’t overshadow the fact this team’s previous late-game failures reared its ugly head during this matchup.
Similar to all the other ones, this coaching staff mistakenly assigned the Scheifele line to defend one of St. Louis’ top-six lines, which as everyone knows, didn’t end favourably for Winnipeg or No. 55.
Yet again, Scheifele’s ineffective defence translated into a game-tying score for his opponent, which is a dire problem that’s plagued this organization far too many times in the past. But unless this situation is addressed, whether that comes from management or the coaching staff, it’ll continue happening.
Sure, the Jets possesses plenty of talented forwards on their roster, however, aside from a few exceptions, most of them either provide offence or defence – not both.
If this franchise hopes to one day return to the playoffs, this imbalance issue must be corrected moving forward.
More from Jets Nation:
Uncategorized
Recent articles from Thomas Hall