Now Signed Through 2022-23, Jets D Logan Stanley Excited to Showcase His Growth Over Next Two Seasons 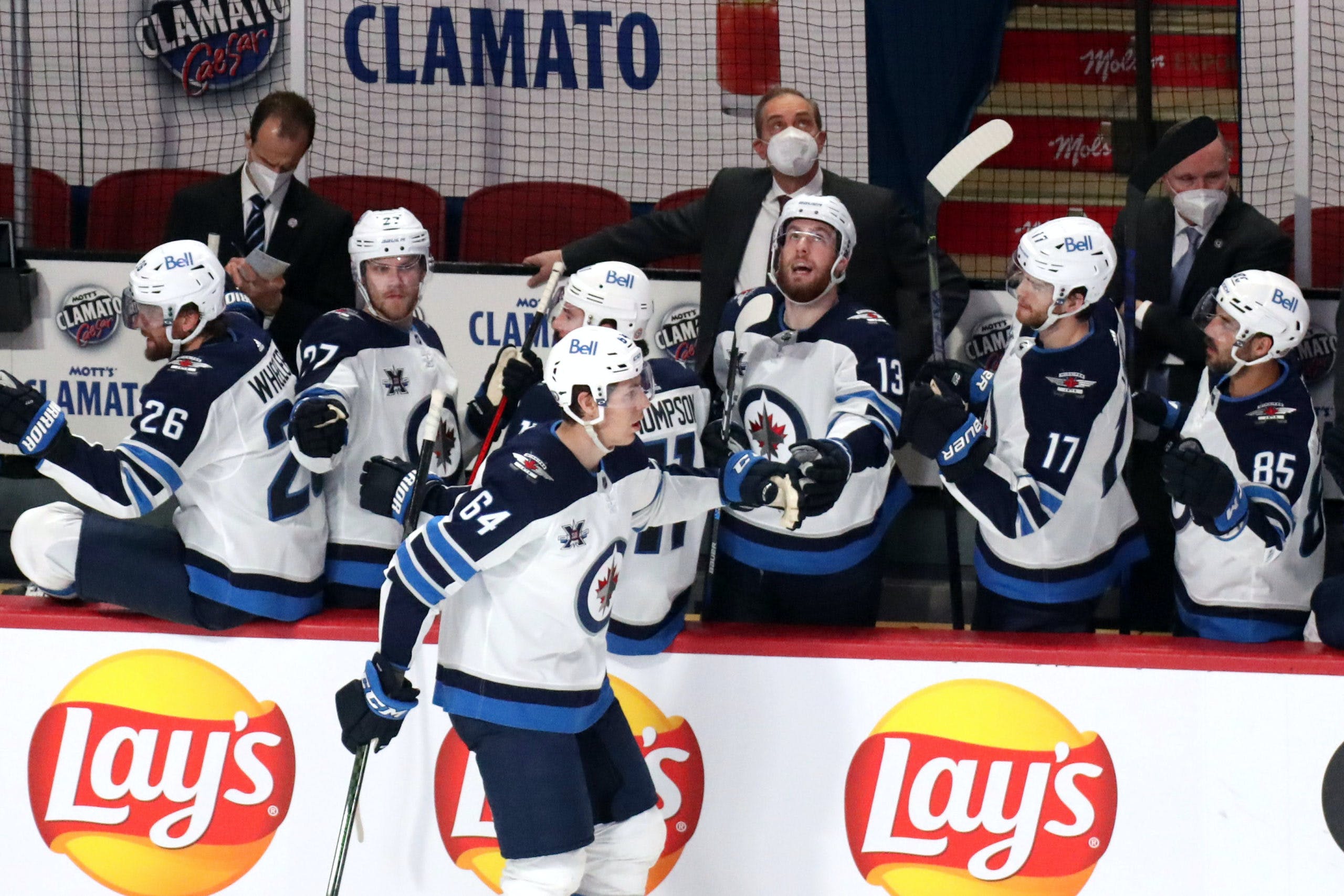 By Thomas Hall
1 year ago
Though the Winnipeg Jets entered this off-season with three key restricted free agents in @Andrew Copp, @Neal Pionk and @Logan Stanley, it didn’t take the front office very long to narrow that list down to just two skaters as they’ve re-signed the towering defenseman to a two-year deal.
After making his NHL debut last season, Stanley, 23, became a restricted free agent for the first time in his young career this summer and is now signed through the 2022-23 campaign. Since he didn’t possess arbitration rights, hammering out a contract extension ultimately proved to be fairly easy for both sides, as the 6’7″ blueliner will come with a very affordable cap hit of $900,000 per season, according to PuckPedia.com.
Once the former first-round selection’s newest contract expires, he’ll become a restricted free agent once again, but this time around, the youngster will have compiled enough playing experience to gain access to arbitration. At that point, he’ll also only be two years away from reaching unrestricted free agency.
Regardless of what happens beyond these next two seasons, Stanley’s emergence at the NHL level has been rightfully rewarded with this two-year contract extension, which will allow him to remain in a place where he feels extremely comfortable. Though there was some speculation he might not be protected during the expansion draft, that didn’t prove to be the case as the Jets opted not to risk exposing one of their top young defensemen.
“I just wanted to come back and be with the Jets for two more years. I was very happy to say, ‘yes’ and stay in Winnipeg,” Stanley explained during his zoom press conference.
“To know that I wasn’t going anywhere and wasn’t able to be picked up was a really good feeling and a relief that I knew I was staying in Winnipeg.”
Heading into last season’s training camp, very few experts predicted that Stanley would open the regular season in the NHL, especially since skaters like @Ville Heinola, @Dylan Samberg and @Sami Niku were also competing for a roster spot. But that’s exactly happened, and given the amount of success he enjoyed back in January, the left-hander is hoping to replicate that performance by working out in a very similar fashion this summer.
“It’s going really good,” Stanley detailed. “I’m doing a lot of the same stuff as I did last year because I think it definitely helped me going into camp and how I felt on the ice so I’m doing a lot of the same stuff and skating lots. I’m excited for next season and just trying to go back in good shape.”
Holding his own on Winnipeg’s third defensive pairing, Stanley averaged 13:13 minutes of ice time per game, producing one goal, four points, 63 shots on goal, 49 hits, 31 blocks and seven takeaways through 37 games during his rookie campaign.
Building off his encouraging showing from the regular season, the Ontario native averaged 15:23 minutes of ice time per game in the playoffs, registering two goals – both of which came in Game Four of the second round against the Montreal Canadiens – three points, 22 blocks, 21 hits and 14 shots on goal over eight postseason contests.
Along with re-signing Stanley this off-season, the Jets have also made a pair of trades to help significantly shore up their backend, as they’ve acquired veterans @Nate Schmidt and @Brenden Dillon. While it’s still a little early to start predicting potential line combinations, there’s no question both of them should help improve this defense that’s struggled mightily over the last two seasons.
“Those are two great players that are going to help our hockey team win games,” Stanley discussed. “I was happy when I saw that they both came, they both bring a little bit of a different element and I think they’re going to fit in really well with our d-core.”
Jets News
Recent articles from Thomas Hall