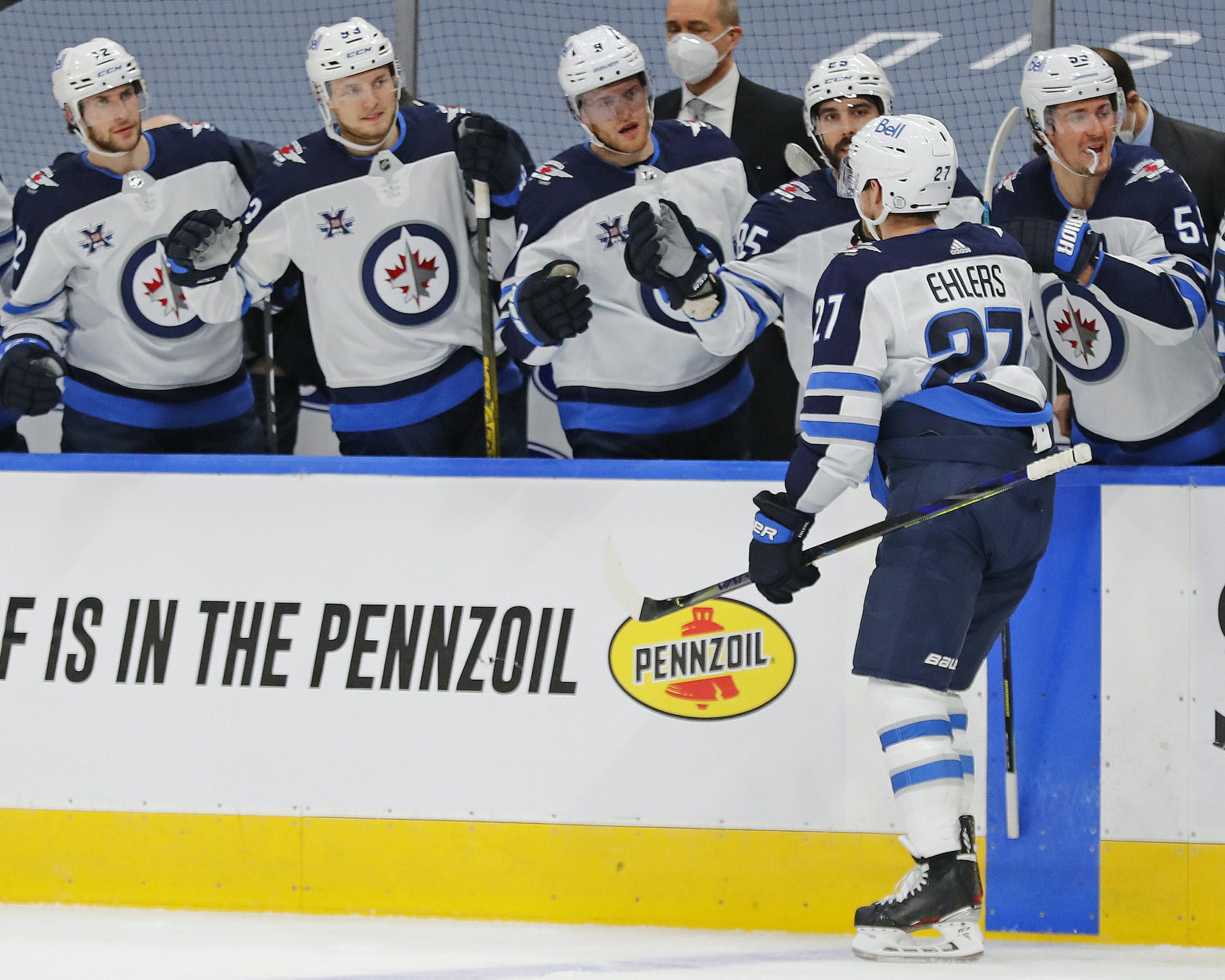 By Thomas Hall
1 year ago
Hockey has returned. Well, the pre-season has at least. Nevertheless, the Winnipeg Jets took to the ice against the Ottawa Senators Sunday night, which was the first of six exhibition contests ahead of the 2021-22 season.
Unfortunately, the Jets weren’t able to come away victorious as they fell 3-2 in overtime and were also defeated in the meaningless shootout afterwards as well. Luckily, the outcome of these pre-season games won’t impact the club’s playoff chances because, well, they don’t matter.
In saying that, the first exhibition game of the year did provide us with our first taste of a potential line combination including @Andrew Copp, @Pierre-Luc Dubois and @Nikolaj Ehlers. Though it’s unclear if this trio will remain together in the regular season, they without question captured the most attention during this Sunday night matchup.
With that in mind, let’s dive into three takeaways from Winnipeg’s pre-season opener.

Coming off a remarkable performance last season, where he posted 21 goals and 46 points in 47 games, Ehlers didn’t waste any time proving he’s ready for the 2021-22 season to begin.
Given Ehlers helped his home country of Denmark qualify for the 2022 Winter Olympics back in August, this probably shouldn’t come as a surprise, however, it was still a little eye-opening to watch the 25-year-old excel at such a high level during his first pre-season game of the year. In total, the left-hander received 18:58 minutes of ice time – second-most among all Jets forwards – and finished with six shots on goal, five scoring chances, two takeaways, one secondary assist and one block.
Most notably, the former first-round selection was seen quarterbacking Winnipeg’s first power-play unit, which earned five opportunities with the man advantage – including one that lasted for five minutes. While this club went 1-for-5 with the extra man, the emerging superstar helped set up that lone goal, as he fed Dubois in the slot that ultimately led to the score.
Granted, it was only one game, but judging by this impressive showing, Ehlers should be in-store for another all-star worthy performance during his seventh NHL season.

No disrespect to prospect @Cole Perfetti, who also shined against the Senators, there wasn’t anything more encouraging than watching Dubois skate with his teammates while looking completely refreshed from last season’s disastrous outcome.
Building off the momentum he generated through the first few days of training camp, the 23-year-old showcased his game-changing agility, which was virtually nonexistent in 2020-21, on multiple occasions during the pre-season opener. While he wasn’t able to score on any of his drives to the net, it was still very promising to witness the 6’3″ forward’s quickness on the edge, allowing him to blow past opposing defenders at will.
Proving to be a crucial offensive force, Dubois finished tied for the team-high in scoring chances (five) and high-danger chances (two), according to NaturalStatTrick.com. Additionally, he also earned the highest xG rate (0.16) on the Jets with the man advantage, as he registered a pair of quality shots on goal – including his power-play marker.
As for his position on the power play, the former Columbus Blue Jacket spent most of his time on the wing opposite from Ehlers, although he was also seen located in front of the net on occasion. Considering that’s where he scored his only goal of the game, it might be wise for Winnipeg to focus on his net-front presence moving forward.
The only thing he won’t be proud of is the fact Senators forward, @Ridly Greig, crossed-check him in the mouth, which required 15 stitches, and more importantly, prevented the youngster from smiling about his impressive showing post-game.
Again, it’s still extremely early, but so far, Dubois has seemingly overcome his woes from the 56-game schedule. Though it’ll be vital to replicate this performance through the remainder of the pre-season and during the regular season, there’s no denying his campaign is off to a strong start.

Before the pre-season began, the Jets had already stated that the backup netminder position was @Eric Comrie’s to lose. Well, it seems those may have been some poor choice of words as the 26-year-old didn’t convince anyone that the second-string role should be awarded this early in camp.
Receiving the start during the first exhibition game on the schedule, Comrie allowed a trio of goals on 27 shots against, with two of them coming from medium-danger areas. Making matters worse, the other goal came from a low-danger area near the top of the left faceoff circle, which allowed the Senators to tie the game in the third period – not a great way to start the pre-season.
The only upside for the 6’1″ goaltender was that he stopped all seven of the high-danger shots against, five of which occurred during five-on-five situations.
Sure, an argument can be made about reading too much into the first exhibition game of the season. But if Comrie continues to post mediocre results through the rest of the way, then perhaps that could open the door for prospect @Mikhail Berdin to put his hat into the ring, especially if he enjoys a noticeable performance out of the gate.
Uncategorized
Recent articles from Thomas Hall