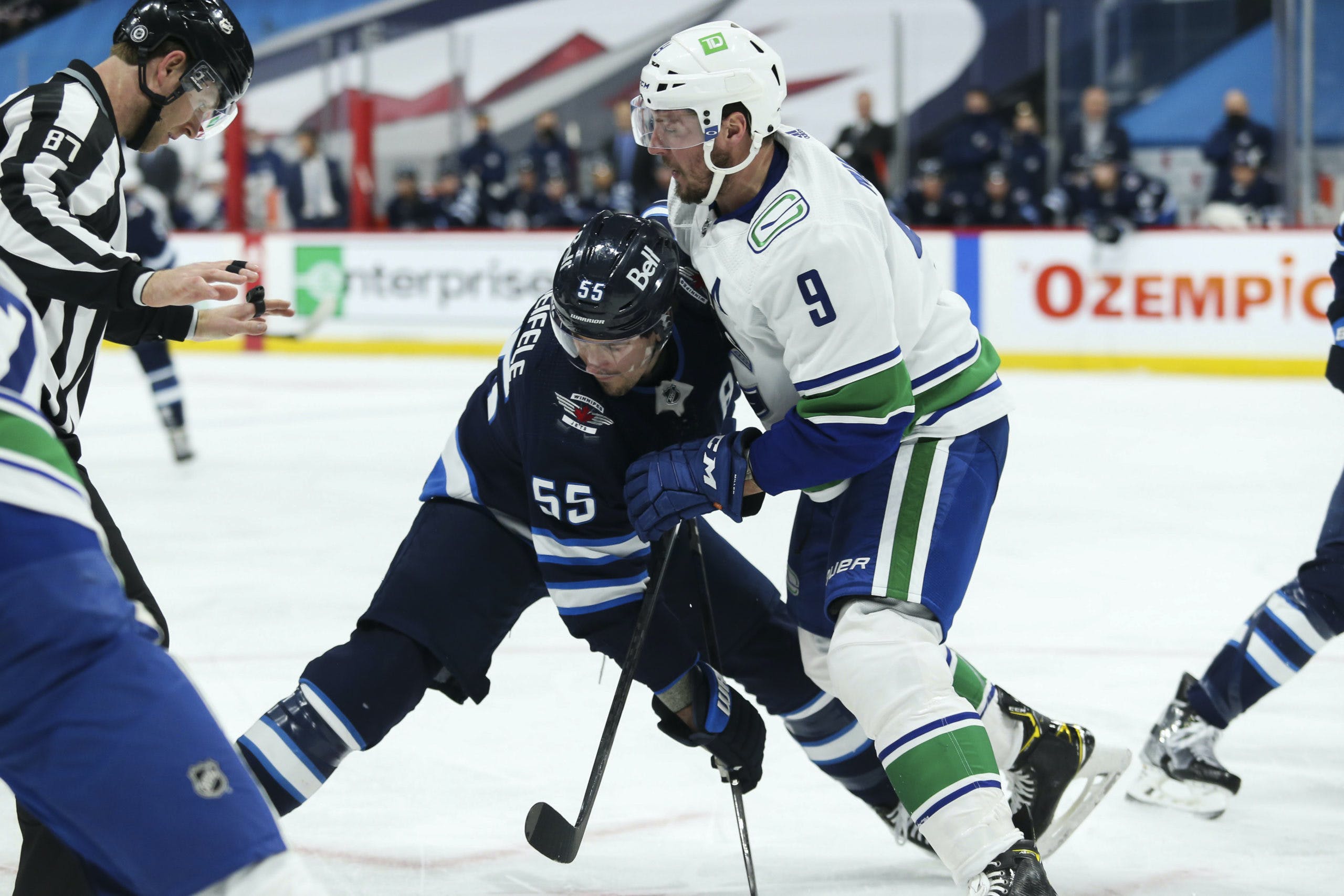 By Thomas Hall
10 months ago
Entering this contest on a five-game losing streak, the Winnipeg Jets needed to turn things around with a victory over the Vancouver Canucks, unfortunately, they couldn’t shake their current woes.
After trading goals in the opening frame, these two teams entered the second period tied at one goal apiece, but thanks to the @J.T. Miller show, his second and third markers on the night handed his club a 3-1 lead. Despite their best efforts, the Jets couldn’t erase their two-goal deficit before the horn sounded, forcing them to play catch up in the final frame once again.
Though Winnipeg outshot its opponent 9-5 in the third period, none of those shots on goal translated into any scoring as they were held off the scoreboard through the remainder of regulation. Making matters worse, a pair of goals from forwards @Brock Boeser and @Elias Pettersson pushed their deficit to four, which proved to be too much to overcome.
As a result, Vancouver snapped its three-game losing skid and came away with a 5-1 victory, allowing them to jump ahead in the Western Conference standings.
Attempting to diagnose this latest defeat, let’s explore three takeaways from the Jets’ sixth consecutive loss.

Surprise, surprise… the Jets were burned by Miller for like the 15th time in his career Thursday night. Ok, perhaps that’s exaggerating a little bit, however, the fact remains the 6’1″ forward enjoys playing against this organization.
Luckily, the 28-year-old was held goalless in each of the two prior matchups this season, although he did register a pair of assists. Breaking out in a huge way during this final meeting of 2021-22, the left-hander earned his first hat-trick on the campaign – because of course it had to come against Winnipeg.
Opening the scoring for his team in the first period, Miller took advantage of some poor defensive positioning from @Andrew Copp and @Nathan Beaulieu, who both shifted too far into the corner. In turn, the Canucks forward was left unattended at the right face-off circle, where he blasted a one-timer home for his first of three goals.
While his second marker served as the game-winner, it was his third score that took the life out of Canada Life Centre and essentially put this contest away. After Vancouver survived a flurry of quality scoring chances from Winnipeg’s skaters, Miller led the rush into the offensive zone and completed his hat-trick by firing his shot through goaltender @Connor Hellebuyck’s five-hole.
Putting the veteran skater’s success into perspective, following this strong performance, he’s now scored eight goals and 17 points through 25 career games against the Jets. Not to mention, the Ohio native also possesses a pair of game-winners during that span, as well.
Thankfully, the Canucks and Jets aren’t scheduled to play each other for the rest of this season, although avoiding Miller might prove challenging depending on where – and if – he gets traded at the deadline.

From both a power-play and a penalty-killing standpoint, the Jets faltered in each of those areas during their losing effort against the Canucks on Thursday.
Ok, let’s begin with the penalty-killing unit, which entered this matchup having killed off 23 of its 27 infractions in January. Better yet, this club featured the seventh-best success rate (85.2 per cent) while shorthanded among all 32 teams in the league, according to NHL.com.
Sadly, this impressive percentage took a major hit a night ago as Winnipeg allowed a pair of power-play goals in a very quick fashion.
Between Miller’s and Boeser’s markers with the man advantage, Vancouver cashed in on each of its power-play chances in just 17 total seconds. Before anyone could blink, on either play, the puck was being ripped into the back of Hellebuyck’s net for a special teams goal.
As for the Jets’ opportunities with the extra attacker, they earned three chances of this variety but couldn’t capitalize on any of them, resulting in an 0-for-3 performance. Having said that, falling short on the power play wasn’t due to a lack of effort.
In total, this club generated eight shots on goal, four high-danger chances and a 1.23 expected goals rate with the man advantage Thursday, according to NaturalStatTrick.com. If not for some unlucky bounces – a few that deflected off the crossbar – and a stellar showing from goaltender @Spencer Martin, things probably would’ve played out very differently.
Nevertheless, Vancouver’s skaters took full advantage of their power-play opportunities, whereas Winnipeg’s didn’t, and that development is something that’s plagued them throughout this current slide.

Needing to call upon another young defenceman, rookie @Johnathan Kovacevic was asked to make his NHL debut and though it was in a losing effort, the 24-year-old certainly looked ready for more.
Granted, Kovacevic only played 10:21 minutes across 16 shifts on the night, but the 6’5″ blueliner’s analytics proved to be very favourable. Along with adding a shot on goal, the youngster led the team in Corsi For Percentage (72.2 per cent), Fenwick For Percentage (66.7 per cent) and recorded the fourth-highest Expected Goals For Percentage (63.6 per cent) at 5-on-5.
Despite starting the game next to his former Manitoba Moose teammate, @Ville Heinola, the right-hander was sheltered next to a veteran defenceman throughout the majority of this contest, which likely played a key role in his effective defensive showing.
Aside from a pair of giveaways, particularly the one that occurred from behind his net, there wasn’t much to complain about Kovacevic’s debut. Without question, he still has a few things to learn at this level, but for the most part, his physicality in the corners and encouraging puck-moving ability stood out the most in this contest.
With the Jets reassigning Kovacevic to the taxi squad, it’s unclear if he’ll draw back into the line-up for Saturday’s afternoon tilt against the St. Louis Blues. But if he does, perhaps everyone will receive another taste of his outstanding skill set.
More from Jets Nation
Uncategorized
Recent articles from Thomas Hall