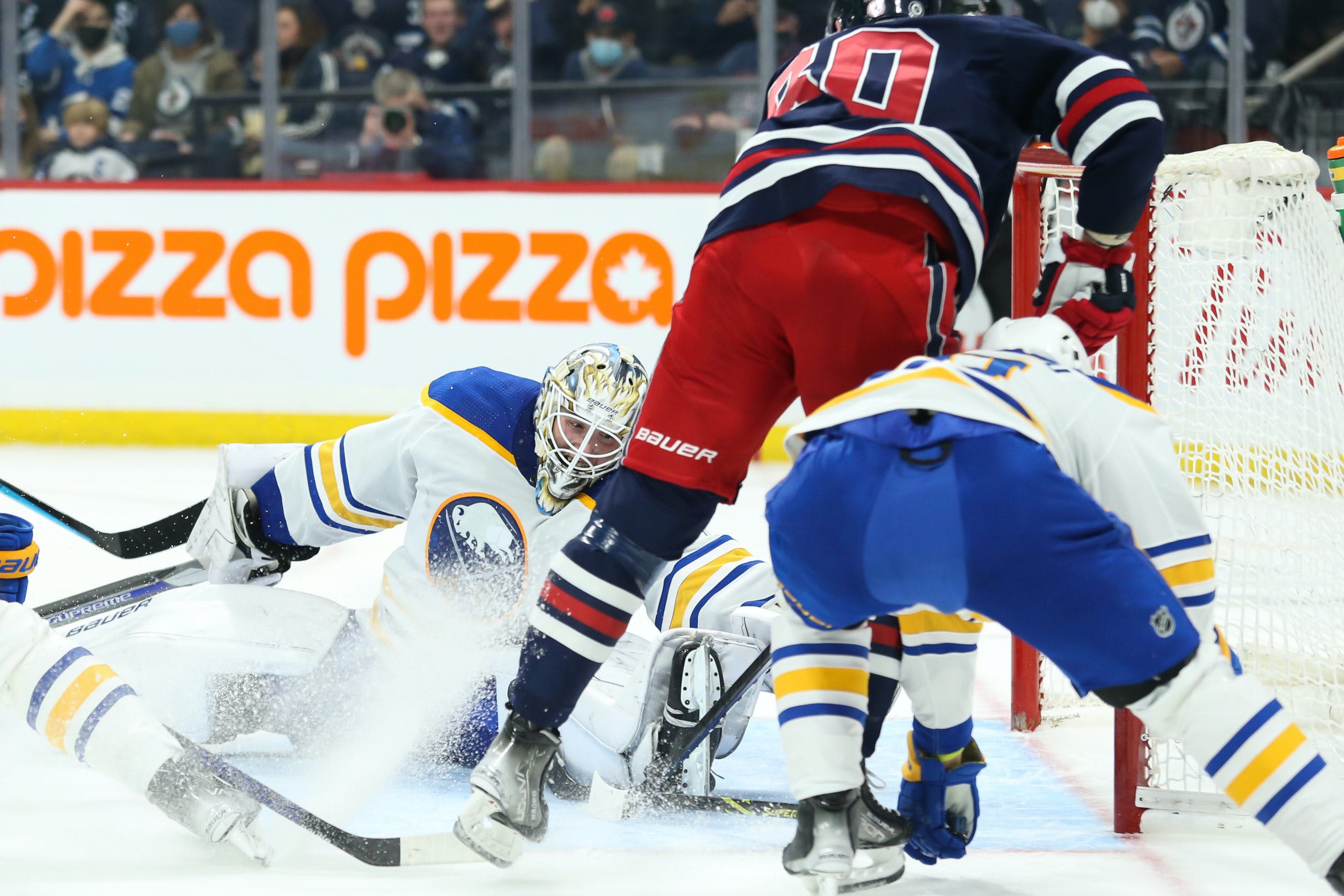 By Thomas Hall
11 months ago
Following a three-day break, the Winnipeg Jets were back in action Tuesday as they hosted the slumping Buffalo Sabres, unfortunately, this contest proved to be one of the ugliest performances of the 2021-22 season for the home club.
In what was a fairly slow start to the game, the Jets found themselves trailing 1-0 after Sabres defenceman @Rasmus Dahlin wired a shot past goaltender @Connor Hellebuyck, providing his team with an early power-play goal. But less than three minutes later, @Josh Morrissey connected with @Pierre-Luc Dubois in front of their opponent’s net, leading to a game-tying marker.
Despite entering the middle frame tied 1-1, everything went downhill for Winnipeg through the final 40 minutes, which saw them surrender a pair of easy goals from @Andres Bjork and Dahlin – his second score of the game. Though @Nikolaj Ehlers registered his 11th goal of the campaign, it couldn’t prevent his team from entering the third period with a one-goal deficit.
Putting this game to rest midway through the final frame, @Jeff Skinner cashed in on a 2-on-1 rush, firing his shot far-side over Hellebuyck’s shoulder, ultimately allowing Buffalo to come away with a 4-2 victory at Canada Life Centre.
For those who dare to dive deeper into this matchup, let’s explore three takeaways from the Jets’ 10th regulation loss of the season.

Appearing in just his eighth career game in the National Hockey League, rookie @Ukko-Pekka Luukkonen certainly enjoyed a performance to remember Tuesday night as he stole the show while making his first start north of the border.
Despite losing each of his first three starts this season, Luukkonen made sure to put an end to that streak against the Jets, which saw him stop 34 of his 36 shots against – 11 of them came from high-danger areas. As a result of this fine showing, the 22-year-old netminder earned his second career NHL victory and was also named the Second Star of the game.
In particular, the Finnish native’s dominance over Winnipeg was on full display in the first period, especially when he singlehandedly stoned @Mark Scheifele on his one-timing attempt.
With forward @Kyle Connor leading the charge into the offensive zone, the sharp-shooting winger cut back just below the face-off circle and sent a cross-ice pass over to Scheifele, providing his teammate with a golden scoring opportunity. While he released his shot perfectly, Luukkonen slid over to deny him with a beautiful pad save.
If not for stops like this, there’s no question the Jets would’ve experienced a much easier time trying to even up the score throughout this contest.

Heading into Tuesday’s showdown against the Sabres, the Jets featured the 12th ranked power play (20.2%) and 31st ranked penalty kill (69.2%) in the league, according to NHL.com. Sadly, this club struggled in both of those departments one night ago, causing them to become very ineffective on special teams.
Beginning with the power play, Winnipeg received three separate chances with the man advantage – all in different periods – and couldn’t generate more than three shots on goal and two high-danger chances. In turn, Buffalo’s penalty killers were able to effectively keep their opposition to the perimeter, largely preventing them from generating many scoring chances in the middle of the ice.
Most notably, this team’s third power-play opportunity, which came just five seconds into the third period, was probably the most crushing one of the entire night. In a game where they trailed by one goal, they desperately needed to spark their bench by scoring a marker with the man advantage, and yet, their efforts were almost non-existent as they chased the puck for almost two minutes.
As for the penalty kill, well, they only allowed one goal against through all three periods. Having said that, the power-play goal against forced the Jets to play from behind early on as it occurred just over seven minutes into the game.
With forward @Kristian Vesalainen earning a two-minute tripping penalty on Dahlin, the Swedish blueliner almost immediately made them pay for this infraction, as he carried possession into the offensive zone and sniped his shot top-shelf for his first of two goals on the night.

While Dubois entered this matchup on a two-game mini pointless drought, it didn’t take him very long to snap that streak against the Sabres, recording his seventh multi-point performance of 2021-22.
Tying this game up at 1-1 midway through the opening frame, Morrissey intercepted a pass at the blue line in the offensive zone, negating a line rush the other way. Afterwards, the 26-year-old defenceman quickly located his teammate in the slot, allowing the former Columbus Blue Jacket to wrist a snap shot home for his 14th goal on the campaign.
Then in the second period, after Dubois was denied multiple times on a 3-on-1 rush by Luukkonen, the 6’3″ power forward regained possession along the boards and began his approach on another scoring attempt. But with Ehlers positioned in front of Buffalo’s goal, the second-line centre decided to pass the puck to the Danish star, allowing him to tie the game at 2-2.
Even with that two-game scoring drought, Dubois has still served as a reliable offensive weapon over the previous nine games – including Tuesday – where he’s posted four goals and nine points during that span.
Uncategorized
Recent articles from Thomas Hall