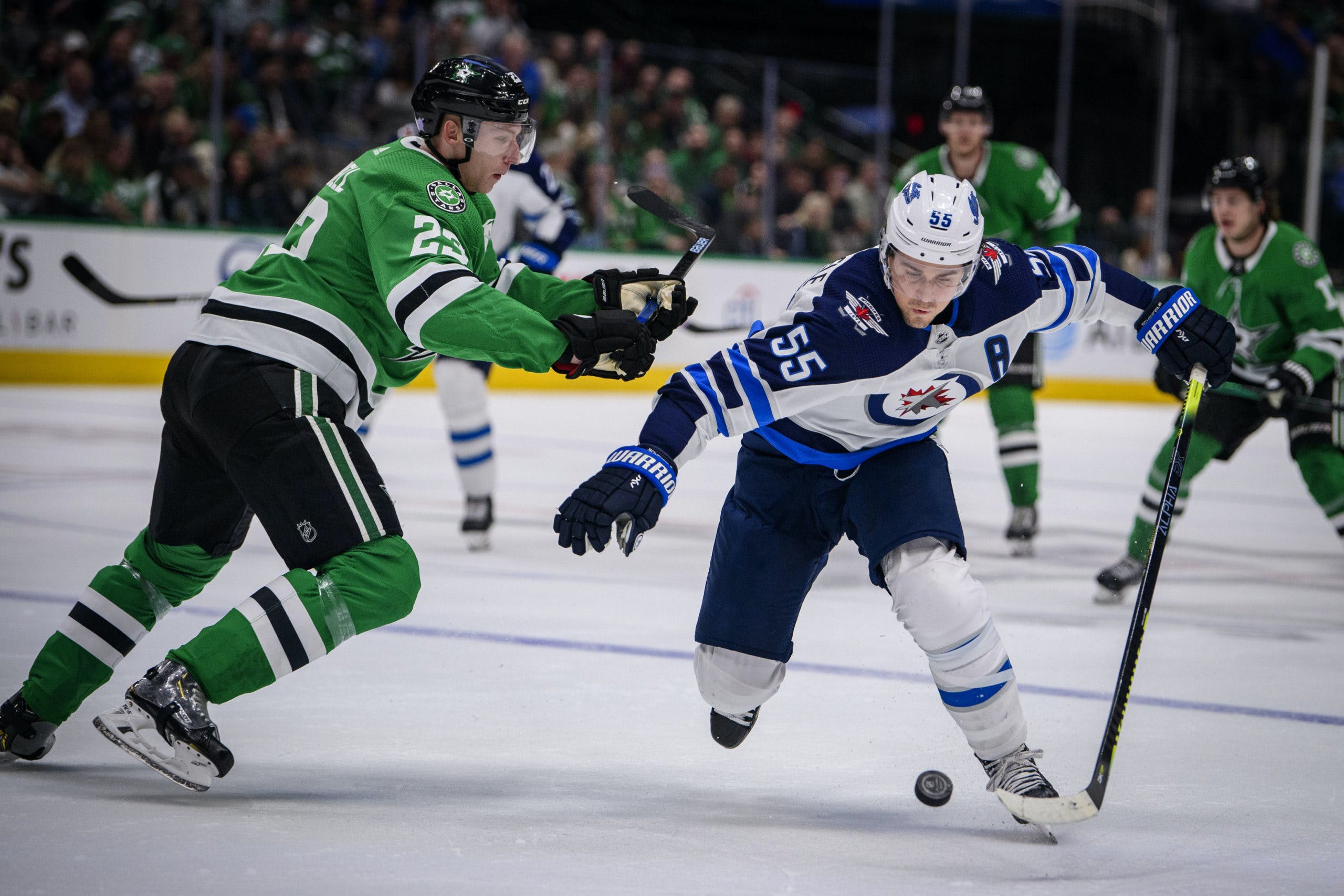 By Thomas Hall
1 year ago
After playing six of the first eight games of this season on the road, the Winnipeg Jets are finally set to remain in one location for more than just a few days as they’re slated to spend each of the next seven games at the Canada Life Centre.
Set to open a seven-game homestand Tuesday, the first opponent the Jets are welcoming to town is the Dallas Stars, who’re coming into this contest while riding a three-game losing streak. As a result, the Stars currently own a 3-4-1 record through eight games, placing them sixth in the Central Division.
Despite featuring plenty of all-star talent, both on offence and defence, Dallas’ skaters haven’t been performing up to their high expectations so far and have endured significant scoring woes from their core pieces. Most notably, forwards @Jamie Benn and @Tyler Seguin have combined for only two goals and five points early on, which isn’t anywhere close to either of their potentials.
In turn, defenceman @Miro Heiskanen has led the way offensively for his club in 2021-22, as he currently leads them in total points (seven) power-play points (three) and is also tied for first in total goals (two), according to NHL.com.
Digging deeper into this showdown, let’s explore three intriguing storylines ahead of this first of four meetings between the Jets and Stars.

Following an extended absence from the Jets due to COVID-19, forward @Mark Scheifele is expected to participate in his first game since Oct. 19, which came exactly two weeks ago.
After making his return to team practice Monday, Scheifele was a full member of the forward group for a second straight day on Tuesday, signalling he’s ready for game action. But considering he hasn’t suited up for a game in 14 days, coach Paul Maurice is planning to ease the 28-year-old back into things, just as they did with captain @Blake Wheeler last game.
With this in mind, the 6’3″ forward has skated on the third forward line in practice over the past two days and is projected to open this contest against the Stars on that unit as well. As a result, the right-handed centre is slated to be positioned alongside teammates @Adam Lowry and Wheeler, making for a powerful trio.
As for Winnipeg’s top six, there isn’t expected to be any line juggling before puck drop, meaning the explosive combination of @Kyle Connor, @Pierre-Luc Dubois and @Evgeny Svechnikov will remain together in the short term. Behind them, @Paul Stastny, @Andrew Copp and @Nikolaj Ehlers will continue to be featured alongside each other on the second line.
Entering his third game of 2021-22, Scheifele remains without a single goal so far, and while it’d be fantastic to watch him break his goalless drought Tuesday, it’ll be more critical to have him finish this matchup feeling healthy and strong.

A new member of the Jets’ family has finally arrived as Andrea and @Connor Hellebuyck welcomed a new baby boy into the world Tuesday morning – good thing his crib was built over the off-season.
Understandably, Hellebuyck’s job as the team’s starting goaltender will need to be put on hold for the next few days, as he and his wife will surely have their hands full with becoming first-time parents. In the meantime, backup @Eric Comrie will receive an opportunity to make his second start of the season, and his first career appearance against the Stars.
Additionally, prospect @Mikhail Berdin, who’s posted a 2.69 goals-against average and a .893 save percentage through six games in the American Hockey League this season, has been recalled from the Manitoba Moose and will serve as the backup goaltender Tuesday.
Though Comrie didn’t fare overly well in the pre-season, the 26-year-old was surprisingly effective last time out against the Los Angeles Kings, which saw him stop 30 of his 32 shots against. Considering nine of those 30 saves were made from high-danger shots on goal, according to NaturalStatTrick.com, it’s safe to say the 6’1″ netminder easily outperformed his low expectations.
As long as the former second-round pick can continue making key stops from around the net, while also making routine saves as well, he shouldn’t have any issues replicating his encouraging performance against the Stars.

With Berdin promoted to the Jets, forward @Kristian Vesalainen has been temporarily assigned to the Moose, meaning there’ll be exactly 12 forwards on the roster during this Tuesday night showdown. But since rolling with one fewer skater up front has been an effective strategy lately, Maurice intends to continue utilizing that gameplan.
In turn, veteran @Riley Nash will likely prove to be the odd man out once again, forcing him to serve as a healthy scratch for a second straight game. Alternatively, this will allow defenceman @Nathan Beaulieu to suit up as the club’s seventh defender for a sixth consecutive contest, which should see him continuing to spend time at forward while also on the backend.
Upfront, @Jansen Harkins and @Dominic Toninato are slated to serve as the 10th and 11th forwards, making for what should be a pretty chaotic night as they attempt to form chemistry with several different skaters. Most likely, this format should provide a few extra shifts for Connor, Ehlers, Stastny, Lowry and potentially Wheeler.
Considering this will be Winnipeg’s first game since returning from the west coast, don’t be surprised if some skaters, specifically within the top-six forward group, become fairly taxed towards the conclusion of regulation.
Uncategorized
Recent articles from Thomas Hall