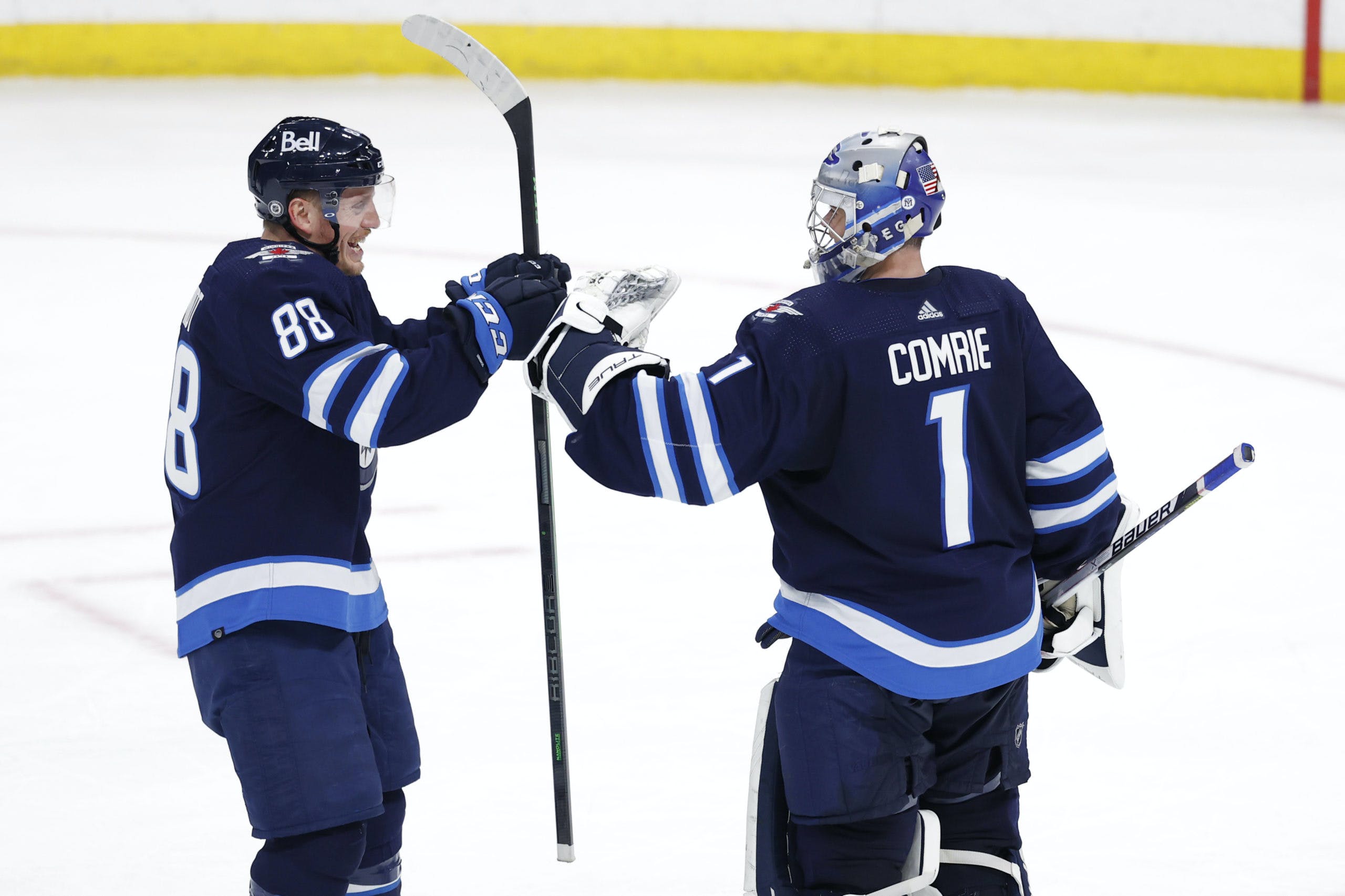 By Thomas Hall
6 months ago
Coming off a 4-1 victory over the Colorado Avalanche, the Winnipeg Jets will look to build off their confidence-building win on Wednesday when the Philadelphia Flyers visit Canada Life Centre.
Similar to the Jets, the 2021-22 season has been very disappointing for the Flyers, who enter this matchup with the second-lowest points total (61) in the East. In turn, their franchise will miss the playoffs for a second straight campaign – their last post-season berth took place in 2019-20.
At this point, neither organization has much to play for during the final week of the regular season. Still, Winnipeg hopes to display a quality performance in front of its home crowd once again, just as they did Sunday night against Colorado.
As everyone’s well aware, that hasn’t always been the case this season.
For a preview of this showdown, let’s explore three storylines ahead of puck drop between the Jets and Flyers.

After missing last game due to minor injuries, both @Nate Schmidt and @Zach Sanford returned to practice Tuesday and they’re projected to suit up during this upcoming tilt versus Philadelphia.
For Sanford, he’ll be reinserted into the team’s bottom-six forward group, bumping @Adam Brooks out of the line-up and into the press box as a healthy scratch. Still, we’ll have to wait until pre-game warm-ups to determine whether Sanford or @Morgan Barron will be skating alongside teammates @Adam Lowry and @Mason Appleton, with the other taking reps on the fourth line.
In regards to Schmidt, who’s seemingly played with every defenceman on the roster, he’ll return to action with a different linemate once again. This time, the 30-year-old will be reunited with veteran @Brenden Dillon on the third defensive pairing, allowing @Dylan Samberg and @Neal Pionk to remain together.
Though Schmidt and Dillon don’t feature an extensive background with each other, during the brief time they spent together earlier this season, this duo performed respectably. So perhaps they can rekindle that success here, too.

There’s no way around it, serving as @Connor Hellebuyck’s back-up isn’t an easy job, just ask former Jet @Laurent Brossoit. Despite seeing very little action this season, @Eric Comrie has been fairly effective when his name has been called and he’s putting together a strong finish to the campaign.
Comrie, who’s expected to make his 15th and possibly final start of 2021-22 Wednesday, has excelled over his previous two outings, where he’s stopped 73 of his 78 shots against. The 26-year-old was defeated in both starts, although the outcome of those contests would’ve been far worse if not for his impressive performances.
Set to make his third start in four games, Comrie will be hoping to build off his recent success against the rebuilding Flyers. As someone that’s slated to become a restricted free agent this off-season, he’ll surely be looking to leave a lasting impression on the coaching staff.
Either way, though, the Edmonton, Alberta, native has done everything possible to prove he’s capable of serving as a reliable back-up at this level.

These last few remaining games may not mean anything on a macro level for the Jets, however, Wednesday’s contest will be a notable one for Pionk, who’s set to play his 200th career game with the franchise.
Yes, time certainly flies by when you’re not expecting it.
In just his third season since being acquired from the New York Rangers – a trade that sent @Jacob Trouba the other way – Pionk has been a constant regular in the line-up thus far. While he hasn’t performed up to his expectations this season, which he’s fully aware of, his availability has been virtually undeniable.
Aside from receiving a two-game suspension for kneeing, the 26-year-old has only missed three other games in 2021-22, two of which were because of a concussion he sustained in December versus the Toronto Maple Leafs.
In addition to logging his 200th game with the Jets, if Pionk records an assist against the Flyers, he’ll also register his 100th career assist with this organization. It’ll be a pretty special night if he reaches both of those milestones on the same night.

Do you think you know who will take home hockey’s ultimate prize? Do you think you can put together the ultimate playoff bracket? Sign up for a FREE ACCOUNT for the Daily Faceoff Playoff Bracket Challenge presented by PointsBet Canada to secure your spot for a chance at prizes and glory! Sign up here.
Uncategorized
Recent articles from Thomas Hall