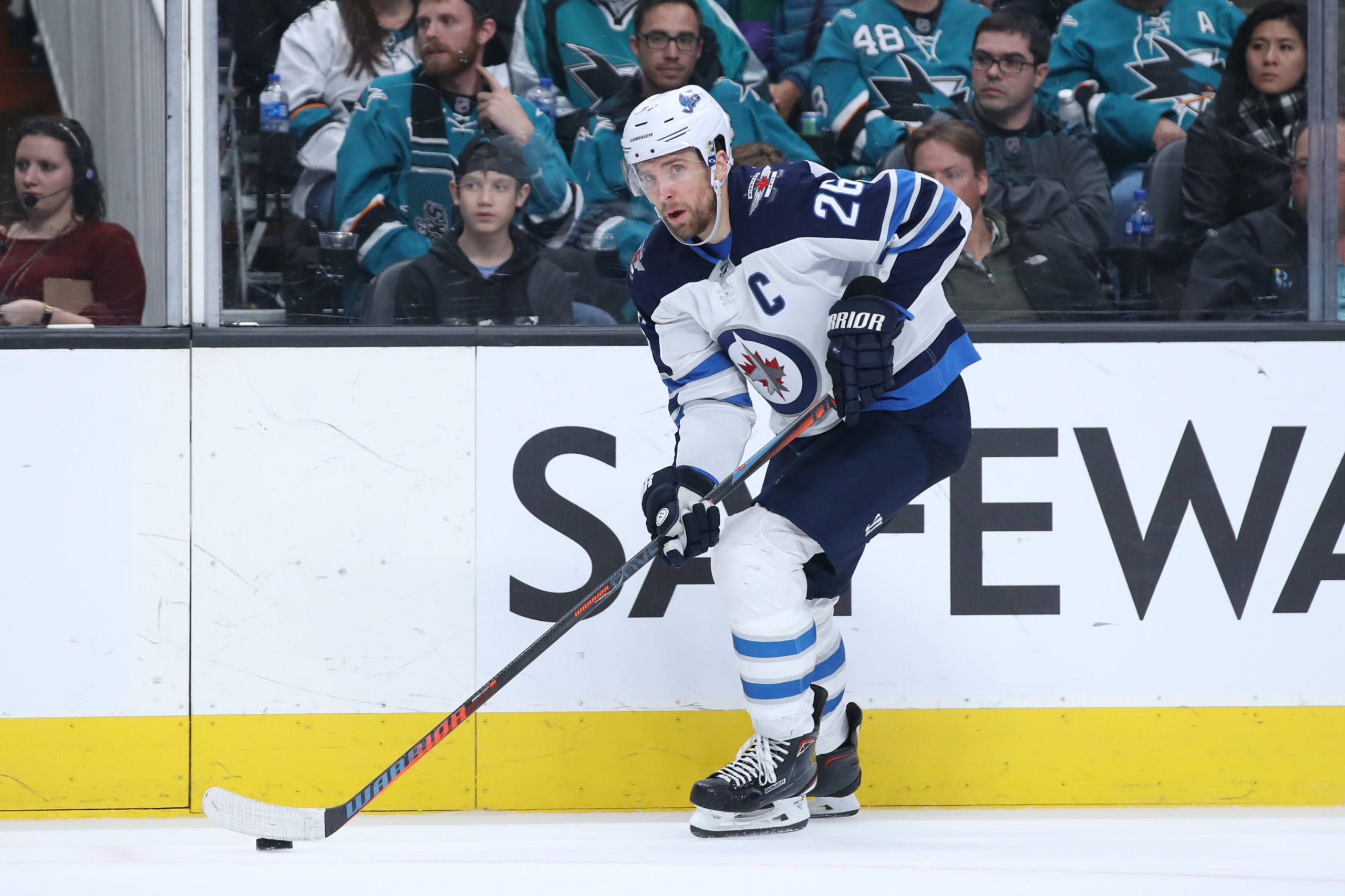 By Thomas Hall
1 year ago
The captain has returned, well, that’s the expectation heading into the Winnipeg Jets’ final game in California for the 2021-22 season, which will come against the 4-3-0 San Jose Sharks.
Yes, that’s right, exactly two weeks after the Sharks came away with a 4-3 victory over the Jets, they’ll receive an opportunity to exact some revenge during their final meeting of the year at the SAP Center. But luckily for everyone watching at home, this showdown will begin in the early time slot, meaning no one will be forced to grind past midnight before the final horn sounds.
On the ice, Winnipeg will be attempting to extend its current winning streak to five games – each of the last four wins has come without @Blake Wheeler or @Mark Scheifele – and they’re expected to receive some reinforcements, or at least one extra body, in the form of No. 26.
For a preview of this Saturday night contest, here are three storylines ahead of this matchup between the Jets and Sharks:

Ironically, the last game Wheeler suited up for was when the Jets and Sharks faced off against one another back on Oct. 16. Now two weeks later, the 35-year-old is expected to be eased back into action, which will see him positioned down on the club’s third line.
Since the 6’5″ forward has been unavailable and inactive for an extended period, coach Paul Maurice is planning to make sure his captain isn’t overused or pushed too hard during his first game in 14 days. In an attempt to limit his minutes, the veteran skater is slated to be positioned alongside @Adam Lowry and @Jansen Harkins at 5-on-5.
While this will be the first opportunity Winnipeg has possessed to dress 12 forwards since Oct. 19, there’s no guarantee that’ll end up taking place, as Maurice believes his team has been clicking at a high level with just 11 skaters up front recently. So don’t be surprised if @Dominic Toninato or @Kristian Vesalainen serve as a healthy scratch Saturday.
For Wheeler, one of his main focuses will be to rediscover how his body performs in game action, especially during the later stages of regulation. Coming off a battle with COVID-19 is no small feat, and considering he was symptomatic at the time, this should prove to be a true test of his endurance – a task he’s surely prepared for.
With the Jets’ top two lines enjoying plenty of success over this last stretch, particularly the @Kyle Connor, @Pierre-Luc Dubois and @Evgeny Svechnikov pairing, there shouldn’t be much pressure or any at all on the Minnesota native to make a huge impact in his return to the line-up.

On the season, the Jets feature the third-worst penalty-killing unit in the league, as they’ve posted a measly 63.0% success rate through seven games in 2021-22. Having said that, they’ve started to turn things around as of late, displaying some encouraging signs over the past week.
In total, Winnipeg’s skaters have committed five separate infractions over the last two games, however, they were able to keep the puck out of their net throughout that entire span. Despite allowing seven shots on goal and five scoring chances over those five shorthanded occasions, this team has only yielded one high-danger scoring chance, which is a pretty impressive accomplishment for this group.
Digging deeper, this club took a considerable step forward in overcoming its shorthanded woes last game against the Los Angeles Kings. Most notably, they executed three consecutive blue-line stands while operating with one fewer skater, preventing the opposition from setting up in the offensive zone.
Considering the Sharks converted on two of their five power-play opportunities back on Oct. 16, there’s no time for the Jets to relax and it’ll be crucial to maintain this recent success if they’re to feature any hope of replicating these results over an extended length of time.

Is Logan Stanley’s Ice-Time in Danger?

At the moment, yes, there’s a chance it might be. With Wheeler returning to action, there’s no longer a necessity to dress seven defensemen on a nightly basis, meaning one of Winnipeg’s depth blueliners will likely return to the press box fairly shortly.
Since veteran @Dylan DeMelo’s spot is seemingly secured, that just leaves @Logan Stanley and @Nathan Beaulieu – two defenders who’ve been sharing ice-time on the third defensive pairing over the past few games. Though a decision on which skater to scratch may not come Saturday, it’s almost certainly going to be made in the coming days, especially once Scheifele returns to the line-up.
In Stanley’s case, his name could prove to be the one that’s eventually removed from this mix, as his performance has dropped off recently, particularly during 5-on-5 situations. Unlike through the first four games of the schedule, the 23-year-old has recorded Corsi For and Fenwick For percentages of 40 percent or lower in each of the last three contests, according to NaturalStatTrick.com.
Making matters worse, he’s also been on the ice for a pair of goals against since Oct. 23, and hasn’t been effective at making clean passes, which has seen him commit several turnovers in the defensive zone during these last stretch of games.
As for his counterpart, while Beaulieu also doesn’t provide much upside at 5-on-5, his services have proven reliable on the penalty kill at times as he’s utilized his 6’2″, 201-pound frame to take away shooting lanes. As a result, he’s generated a handful of key blocks in high-danger areas, preventing the team’s goaltenders from making any additional saves.
With Maurice in charge, odds are he’ll be in favour of handing out more playing time to the older defenceman who’s capable of making an impact while shorthanded.
Uncategorized
Recent articles from Thomas Hall