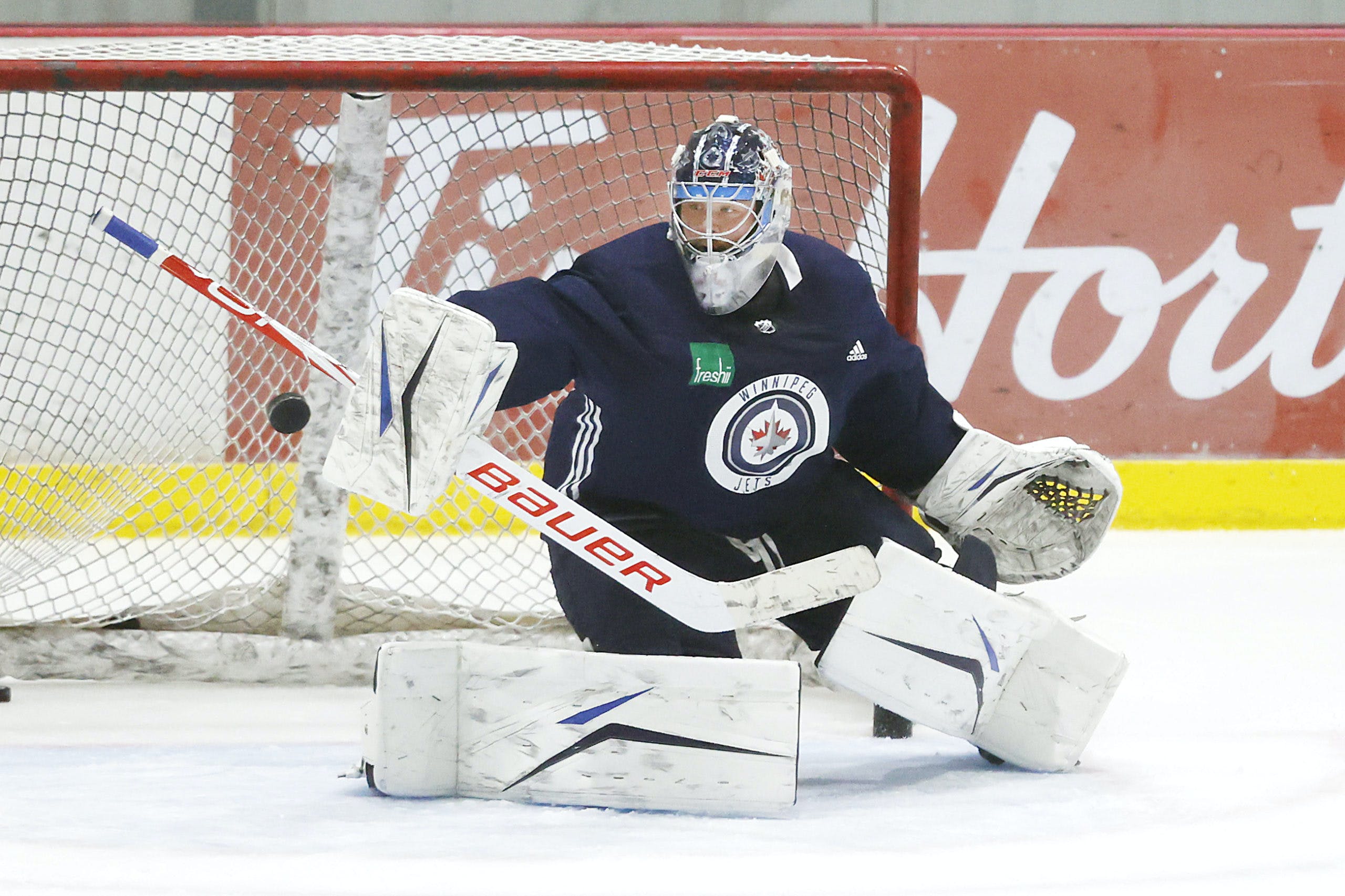 By Thomas Hall
1 year ago
Though 48 hours haven’t even passed yet since the Winnipeg Jets’ memorable comeback victory, and yet, they’ll need to move on quickly as their next game is scheduled for Thursday night at the Staples Center against the Los Angeles Kings, who’ve opened the season on a 1-4-1 record.
Since the Jets and Kings haven’t played against one another since February 2020, there’ll be plenty of new faces in the lineup for the home team during this contest, especially since they remain in the middle of a retooling or rebuilding phase – whatever they’re classifying it these days.
Most notably, Los Angeles’ blueline should look very different compared to the last meeting between these two clubs, as defensemen @Drew Doughty (knee) and @Sean Walker (knee) have both recently sustained significant injuries and won’t be available. Upfront, while forwards @Anze Kopitar and @Dustin Brown remain, @Phillip Danault and @Viktor Arvidsson were among the newcomers that joined over the off-season.
For a preview of this showdown between the Jets and Kings, let’s dive into the three storylines that could have an impact on this game.

As of now, it’s unclear as to when captain @Blake Wheeler will appear in his first game since being placed on the National Hockey League’s COVID-19 protocol, however, it’s a very encouraging sign that he was able to return to practice on the first day of eligibility.
Following a 10-day isolation period, all of which was spent inside his parent’s basement in Minnesota, Wheeler took part in Winnipeg’s optional skate Wednesday and was able to interact with his teammates on the ice for the first time in a week and a half. While speaking to the media afterwards, the 35-year-old was asked about his recovery timeline and admitted he doesn’t want to rush anything before returning to game action.
Further to this, coach Paul Maurice faced a similar question during his Zoom call, explaining how the team plans to take things day-by-day regarding its captain’s health status. If the 6’5″ forward feels comfortable following Thursday’s morning skate, then perhaps he’ll receive the green light to suit up against the Kings.
If that indeed proves to be the case, the Jets will finally be able to dress 12 skaters – a luxury they haven’t been afforded in each of the last three games. In saying that, readjusting the forward lines could become a delicate situation for the coaching staff, especially if the @Kyle Connor, @Pierre-Luc Dubois and @Evgeny Svechnikov line is to remain intact.
Assuming that trio stays together, Wheeler would need to be positioned alongside either @Andrew Copp or @Adam Lowry, at least until @Mark Scheifele is eligible to return to the lineup. But unless @Nikolaj Ehlers feels comfortable shifting over to the left wing, we could see the veteran forward temporarily assigned to the club’s third line.

In the middle of his age-35 season, goaltender @Jonathan Quick may feature a stellar reputation as one of the most decorated active netminders in the NHL, although there’s no ignoring the fact that his best days are likely far behind him.
Now four seasons removed from capturing the 2017-18 William M. Jennings Trophy, Quick’s production level has dropped off considerably since then, which has seen him post a 3.03 goals-against average and a .896 save percentage through 113 starts since 2018-19. In particular, the 6’1″ goaltender has registered a 2.64 goals-against average and a .908 save percentage over his three starts this season.
While Los Angeles has been effective at preventing high-danger scoring chances in 2021-22, as they’ve surrendered the fifth-fewest chances (42) of that variety at 5-on-5 among all 32 teams in the league, replicating that type of success could become challenging on Thursday.
Since Doughty and Walker – two of the club’s top defenders – won’t be available, the onus is expected to shift to defensemen like @Alexander Edler and @Matt Roy, who aren’t nearly as productive at taking away quality shooting lanes. In turn, there could be significantly more pressure added to Quick’s plate during this matchup, which may not bode well for the all-star netminder.
Considering Winnipeg’s skaters have struggled at times to create high-danger chances, this contest could serve as a prime opportunity to overcome some of those offensive woes while facing a talented goaltender who’s well past his elite days.

The moment has finally arrived, not one any of us were waiting for, but it’s time for backup @Eric Comrie to take the reins in net for the first time this season.
After starter @Connor Hellebuyck opened the first six games of the regular season, Maurice and the rest of his staff have decided to provide him with a well-deserved night off, clearing the way for Comrie to appear in his first NHL game since Jan. 31, 2021.
But as we all know by now, the 26-year-old hasn’t endured much success at the NHL level throughout his career, resulting in a 3-5-0 record, 4.08 goals-against average and a .873 save percentage through nine total contests. Unfortunately, the 6’1″ netminder didn’t fare much better in this year’s pre-season either, as he created a troubling 3.50 goals-against average and a .870 save percentage over two exhibition games.
Taking these factors into account, unless the Jets’ defenders are able to limit turnovers in the defensive zone while also consistently clearing the front of the net, chances are they’ll be required to create plenty of scoring drives if they hope to extend their current winning streak to four games.
Uncategorized
Recent articles from Thomas Hall