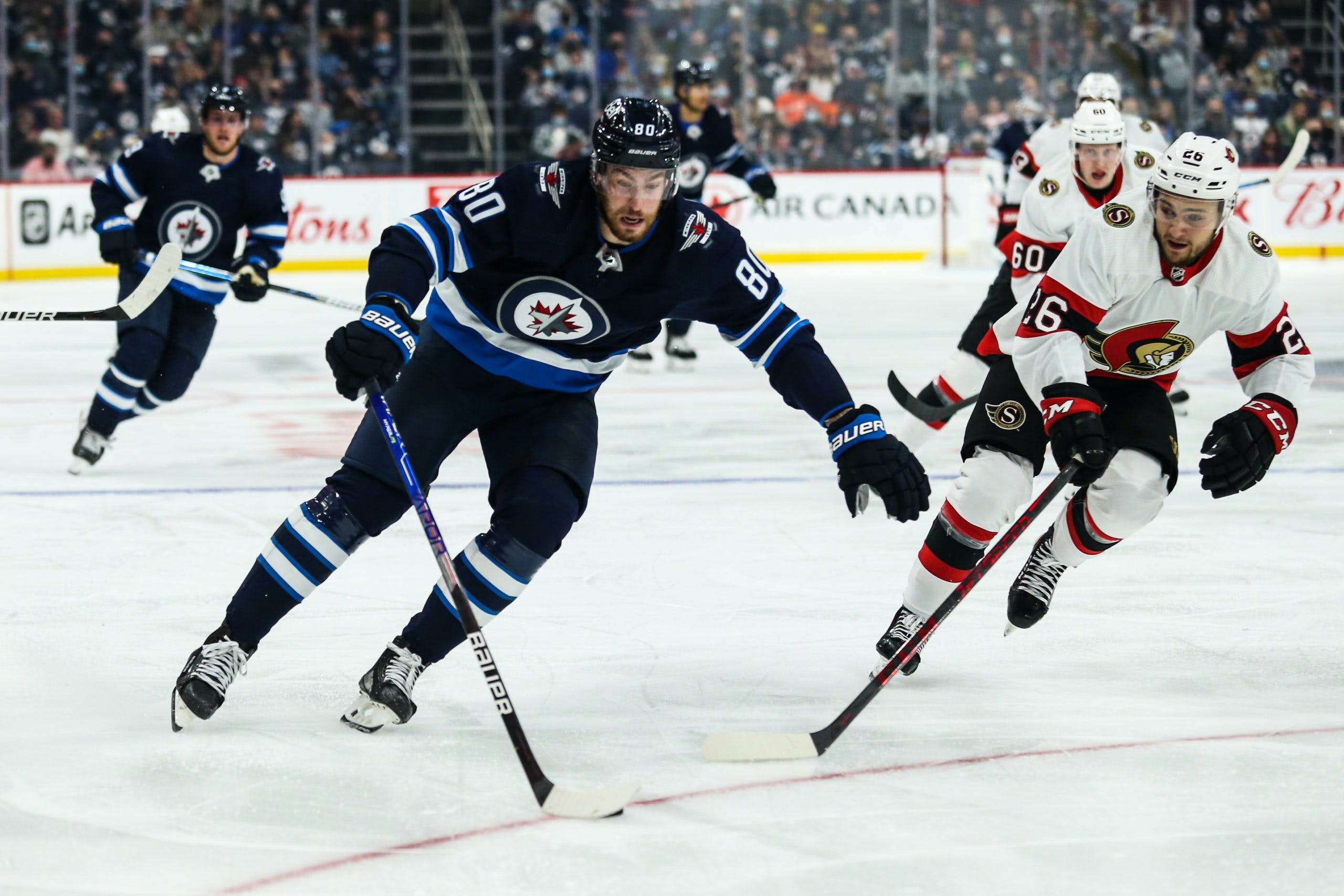 By Thomas Hall
8 months ago
Coming off a grinding victory over the Vegas Golden Knights, the Winnipeg Jets will look to remain in the playoff hunt as they’re set to begin a back-to-back series, starting with the Ottawa Senators.
Entering this contest, this club currently sits three points behind the Dallas Stars, who possess the final wild-card seed and hold two games in hand over this franchise. In order to keep pace, it’ll be vital to extend this winning streak to three games, especially with Dallas visiting the Carolina Hurricanes.
Along with keeping a close eye on the Stars, fans will also want to monitor the Golden Knights, who’ll be hosting the Nashville Predators on Thursday. Yes, it’s that time of the year again where scoreboard watching has become necessary.
If Winnipeg takes care of business against Ottawa, receives some help from both Carolina and Nashville, this organization will find itself positioned just one point outside a playoff spot. You never want to rely on other teams, but in this case, no one would likely object to witnessing a pair of Dallas and Vegas losses.
For a preview of this matchup, let’s explore three storylines ahead of puck drop between the Jets and Senators.

With forward @Adam Lowry still in COVID-19 protocol, the Jets aren’t expected to make any line-up changes ahead of this showdown against the Senators, meaning @Nikolaj Ehlers will continue skating on the top line next to teammates @Mark Scheifele and @Blake Wheeler.
Proving to be a productive trio last time out, Ehlers acted as a driver on this unit and helped generate plenty of scoring chances, ultimately leading to his multi-point performance. Altogether, this first line performed to a team-high 64.6 per cent Expected Goals For Percentage, according to MoneyPuck.com, large in part thanks to the Danish superstar’s 0.65 individual expected goals rate at 5-on-5.
Given Scheifele’s recent skittishness towards shooting, paired with Wheeler’s continued offensive decline, Winnipeg’s top forward group desperately required some assistance down the stretch. As seen Tuesday, this duo can be far more effective when positioned next to an elite winger like Ehlers.
Of course, the forward lines remain less than optimal, especially from a minutes perspective, although the fact remains that the 26-year-old must continue carrying this trio if they’re to enjoy any success against Ottawa.

Chance at Redemption for Pierre-Luc Dubois

On most nights, centre @Pierre-Luc Dubois usually figures to be one of Winnipeg’s most effective skaters, both offensively and defensively. Unfortunately, that was far from the case two nights ago.
Even with a favourable bounce that led to his 25th goal of the season, Dubois still performed miserably against Vegas, which saw him endure arguably his worst showing of 2021-22. Unlike previous contests, the 23-year-old largely struggled to create space for himself in all three zones, preventing him from creating numerous net drives like we’ve become accustomed to previously.
In the end, the 6’3″ power forward finished the night with team-lows in Expected Goals For Percentage (8.1 per cent), Corsi For Percentage (20 per cent) and Fenwick For Percentage (19.2 per cent) at 5-on-5. Making matters worse, he also registered the worst on-ice expected goals differential (-1.62) during those same situations.
By all accounts, it was a rare off night for Dubois – who’s enjoyed a strong bounce-back performance this season – and he’ll surely be looking to put these woes behind him Thursday night.

Is Connor Hellebuyck Catching Fire at the Perfect Time?

No other goaltender has seen more action than @Connor Hellebuyck this season, but with just 18 games remaining, is he about to catch a second wind?
The 2021-22 campaign has been far from ordinary for Hellebuyck as he’s received inconsistent support from his teammates, largely resulting in a career-worst 2.95 goals-against average. Though Tuesday night’s outing wasn’t any different in that regard, the 28-year-old took it upon himself to will his club to victory by returning to his Vezina Trophy-winning form.
Stopping all 42 shots against, the two-time All-Star frustrated the Golden Knights’ skaters all night long and rightfully earned his fourth shutout of the season – the 28th of his career.
Between making key stops during odd-man rushes, large scrambles in front and defensive breakdowns, Hellebuyck refused to allow anything to sneak past him. It was a dominating performance that hasn’t been seen nearly enough as of late.
Could that be a result of fatigue or insufficient team defence? Probably. Whatever the case may be, if Hellebuyck can carry the Jets down the stretch, he might just push them into a playoff spot.
More from Jets Nation:
Uncategorized
Recent articles from Thomas Hall