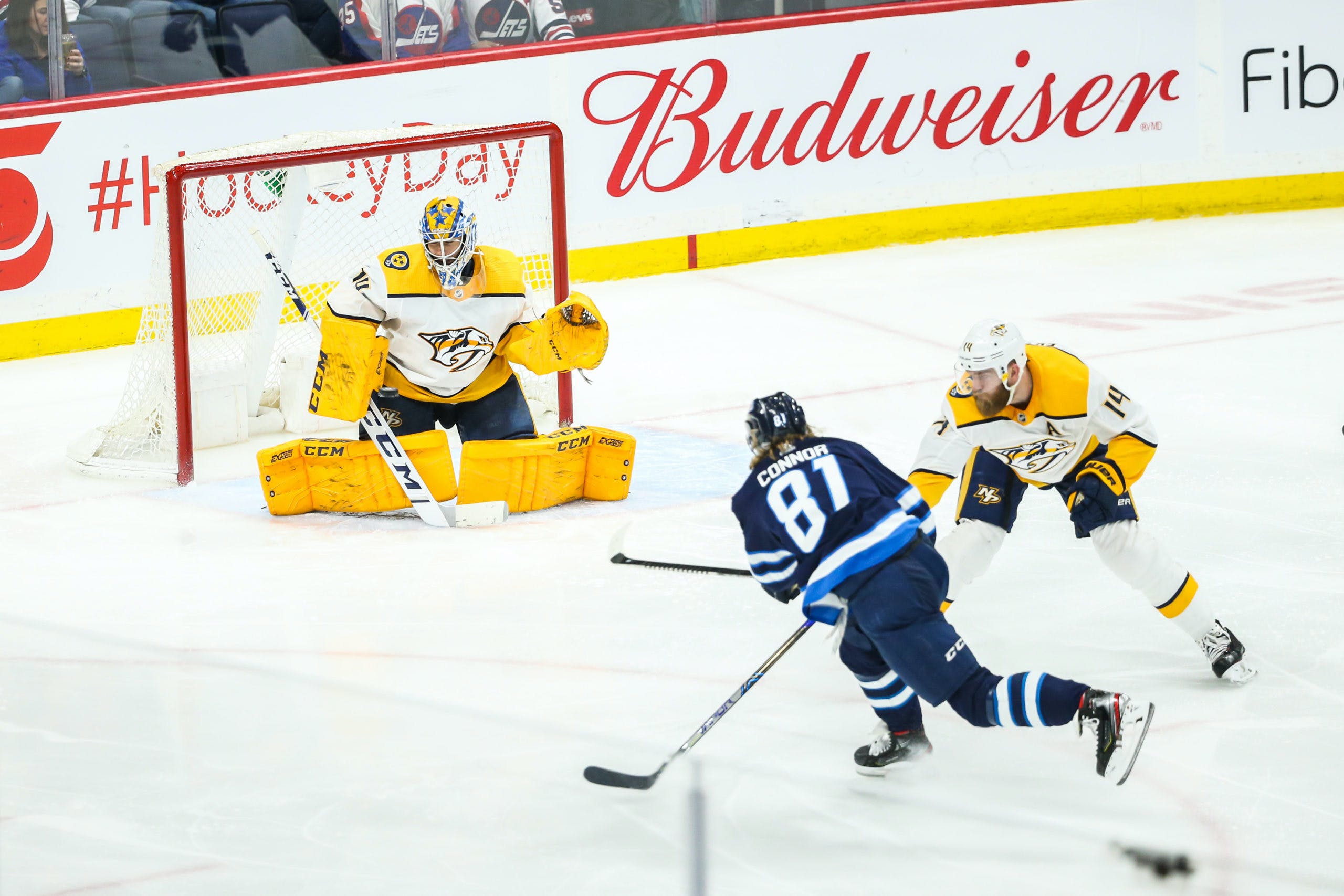 By Thomas Hall
1 year ago
After earning their first victory of 2021-22, the Winnipeg Jets are ready for their next challenge, which will come against the Nashville Predators – an opponent they haven’t faced since 2019-20.
For those wondering, the Jets and Predators haven’t played each other since Feb. 4, 2020, a game that saw this Canadian franchise fall 2-1 in overtime. Oh to think about what life was like a whole… 627 days ago.
Or for the math nerds out there, one year, eight months and 19 days ago. Alternatively, that was 89 weeks and four days ago. Ok, enough of all that counting – let’s get back to hockey.
Though Winnipeg has only won one of its first four games of the season, so has Nashville as they currently own a 1-3-0 record out of the gate. While their roster has been significantly turned over since the last time these two teams met, they still feature skaters like @Matt Duchene and @Ryan Johansen upfront along with @Roman Josi and @Mattias Ekholm on the backend, meaning they likely won’t be a pushover.
For a preview of this Saturday night matchup, here are three interesting storylines ahead of the Jets’ fifth contest of 2021-22:

Sadly, both @Blake Wheeler and @Mark Scheifele have been ruled out for this showdown as they remain in the National Hockey League’s COVID-19 protocol. In addition, a timeline for each of their returns is also unavailable, making their statuses for Tuesday’s game unclear.
In the meantime, since the Jets aren’t provided with any salary cap relief in this scenario, they still don’t possess enough long-term injured reserve space to recall any reinforcements, leaving them with just 11 forwards once again. As a result, this club will be forced to play shorthanded up front for a second straight contest, giving them no other choice than to dress seven defensemen.
With this in mind, coach Paul Maurice and the rest of his staff will be required to make several different line combinations on the fly through all three periods, meaning there shouldn’t be any shortage of ice time for the top-six forwards. In saying that, the forward lines are expected to look exactly the same to at least begin the game, which will go as follows:
@Paul Stastny – @Andrew Copp – @Nikolaj Ehlers
@Kyle Connor – @Pierre-Luc Dubois – @Evgeny Svechnikov
@Jansen Harkins – @Adam Lowry – @Kristian Vesalainen
@Riley Nash – @Dominic Toninato

When this trio was paired together ahead of last game, it was unclear how quickly they’d be able to form some chemistry on such short notice, although they didn’t seem to endure any issues in that department against the Anaheim Ducks.
Opening the scoring for Winnipeg, this unit created a turnover inside the defensive zone and immediately went on the attack in transition, which saw Dubois leading his teammates into the offensive zone before leaving a drop pass for Svechnikov. Just seconds later, the 24-year-old sent a pass over to Connor, who ultimately hit No. 80 with the puck in the slot, allowing him to deflect it into the back of the net.
While that was the only shot on goal this trio generated, their success went beyond just the box score, as they displayed some encouraging puck movement and also seemed to be in sync with each other during almost every shift. Granted, it was only one game, nonetheless, there certainly appears to be a connection starting to form and it could become even stronger if they remain together long term.
Despite making positive strides offensively, this group did encounter some struggles on the defensive side, resulting in a 25.0% Corsi For Percentage, a 20.0% Fenwick For Percentage and an 18.9% expected goals for rate, according to NaturalStatTrick.com.
So there’ll definitely be some room for improvement when this trio hits the ice against the Predators Saturday night.

Even though the Jets and Predators haven’t seen each other in almost a year and a half, both of these franchises feature very similar playing styles, which are slated to be on full display during this Central Division showdown.
Asked about what to expect from Nashville, Maurice explained following Friday’s practice that while their roster has largely been overhauled, they still pride themselves on playing tough and physical hockey. Looking at the leaderboard, those attributes haven’t translated into high totals just yet, as they’re positioned in the bottom half of the league in hits (55), blocks (37) and takeaways (23), according to NHL.com.
In saying that, there are still a couple of skaters on the Predators’ roster that the Jets will need to game plan against in that regard, including @Luke Kunin, who leads their team in hits (10). @Filip Forsberg, who doesn’t shy away from throwing a hit or laying down and blocking key shots from the point.
On defence, along with Josi, @Alexandre Carrier is also someone to keep an eye on when he steps onto the ice, as he’s very effective at forcing opposing skaters off the puck and blocking shooting lanes in the defensive zone.
Combining all of these factors together, expect there to be plenty of fireworks through all three periods, similar to how things transpired between the Jets and Minnesota Wild earlier this week.
Uncategorized
Recent articles from Thomas Hall