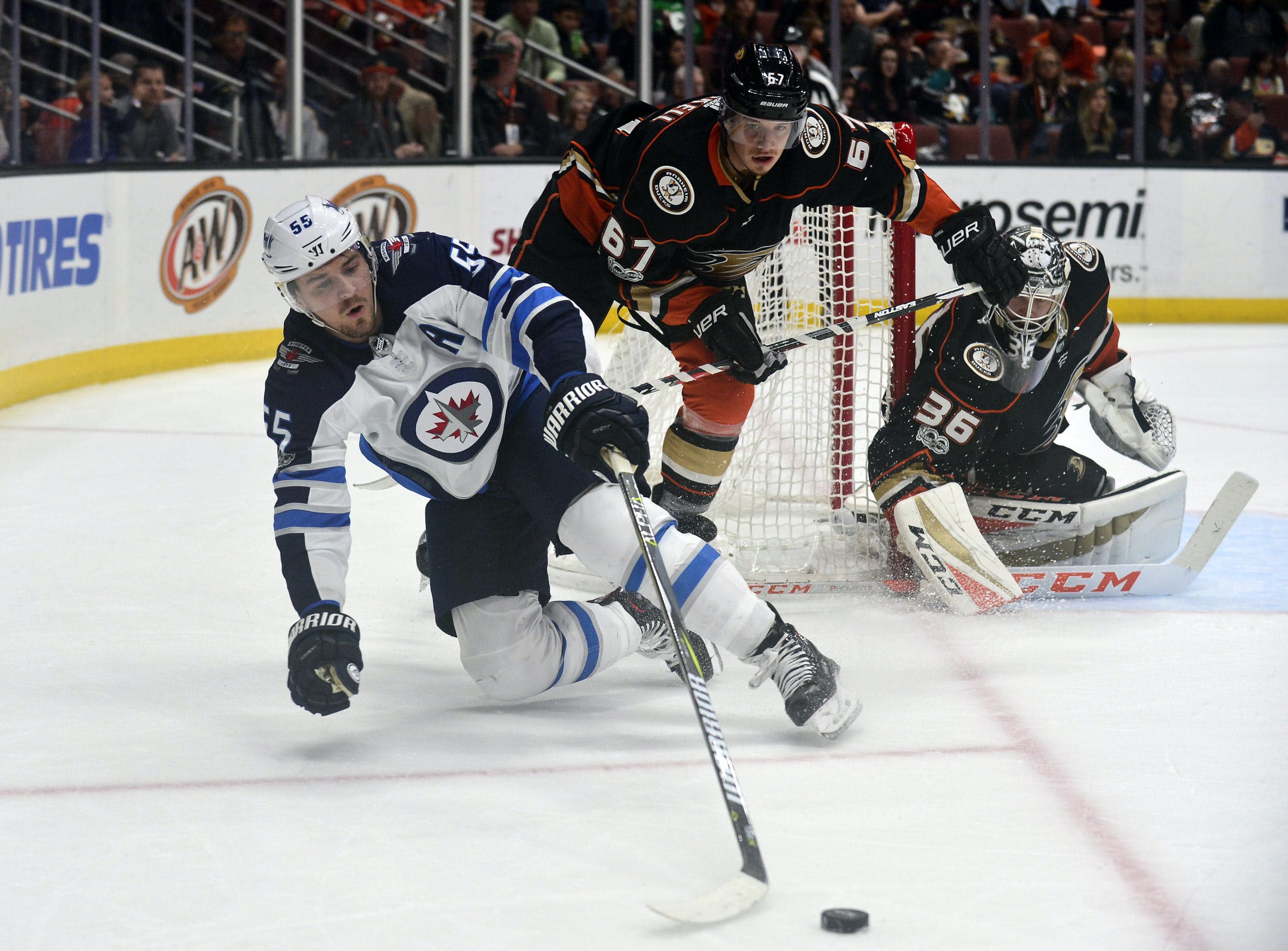 By Thomas Hall
1 year ago
After spending the first three games on the road, two of which occurred out on the west coast, the Winnipeg Jets have finally returned to the “True North” and are set to embark on their first regular-season game at the newly-named Canada Life Centre on Thursday.
Unfortunately for this team, they didn’t enjoy much success on their road trip as they lost all three games, making them one of five teams in the National Hockey League that remain winless. Ironically, three of those franchises are from the Central Division, including the Jets, Arizona Coyotes and the Chicago Blackhawks.
If Winnipeg hopes to end its current three-game losing streak, they’ll first need to find a way to surge past the Anaheim Ducks, who defeated them 4-1 back on opening night. Since then, they’ve posted a 1-1-0 record over their last two games, with that sole victory coming in a 3-2 overtime victory over the Calgary Flames.
With the Jets aiming to provide their fans something to cheer about as they welcome them back to their home arena, let’s explore three storylines that could have an impact during this homecoming special.

After producing a positive COVID-19 test, forward @Mark Scheifele has entered the league’s COVID-19 protocol and has been in isolation ever since, however, there might be a chance we could see him in the lineup on Thursday after all.
Since Scheifele has already tested negative once and is asymptomatic, if a second negative comes back before puck drop, he’ll likely receive permission to dress for the home-opener against the Ducks. Having said that, the results of that test aren’t expected to be released until closer to game time, meaning his status might not be determined until just before the pre-game skate.
If the 6’3″ forward isn’t able to suit up for the Jets, then based on the forward lines from the morning skate, this team’s first line will feature @Paul Stastny, @Andrew Copp and @Nikolaj Ehlers. Yes, that’s right. Ehlers would finally receive top-line minutes in this scenario.
As for the second line, the newly-formed group would consist of @Kyle Connor, @Pierre-Luc Dubois and @Evgeny Svechnikov. While this trio has barely spent any time together previously, given each of their impressive skill sets, they could enjoy a strong performance if they’re able to form a solid bond fairly quickly.
For now, let’s hope Scheifele ends up exiting the league’s COVID-19 protocol, making him available for this highly-anticipated contest.

On an unrelated COVID-19 note, veteran @Dominic Toninato has been recalled from the Manitoba Moose and is expected to suit up for the Jets on Thursday – a move that was slated to occur once rookie @Cole Perfetti was assigned to the American Hockey League on Wednesday.
Though Toninato didn’t break camp in the NHL, the 27-year-old occupied a prominent role with the Moose during his brief time with them, which saw him serve in a top-six role. As a result, the left-hander was able to register one assist through just two games.
Preparing to make his 2021-22 debut with the Jets, the 6’2″ forward skated alongside @Riley Nash for most of the team’s morning skate and is expected to open Thursday’s contest in a fourth-line role as one of the team’s 11 forwards. In turn, he’s likely to be featured in multiple different line pairings as coach Paul Maurice and the rest of his staff attempt to juggle their forward groups.
Despite appearing in just a handful of NHL games last season, Toninato emerged as a productive skater during the 2021 Stanley Cup Playoffs, as he scored a key goal against the Edmonton Oilers in Game 1 of that opening-round matchup. So don’t be surprised if he adds an offensive spark to Winnipeg’s bottom-six group.

Since Perfetti was still technically available to play in Minnesota, deciding to dress 11 forwards and seven defensemen was a questionable choice made by Winnipeg’s coaching staff rather than one they were forced into. But this time, playing with one less forward and one extra defenceman might be the only viable option.
With Scheifele’s status up in the air, the Jets currently possess two separate game plans for this rematch against the Ducks. If the top-line centre is cleared to play, then this team will carry an even number of forwards. If not, then they’ll be forced to play a second consecutive game with an extra defender, which is obviously less than ideal.
While some of you may be wondering why this club doesn’t just recall another forward in replace of Scheifele, well, that’s because they don’t own enough long-term injured reserve space to do so. At this current moment, they only feature approximately $257,500 of LTIR relief pool, according to PuckPedia.com, which isn’t enough to promote another forward.
So unfortunately, the Jets will have to make the best out of this tough situation with the skaters that are currently on their roster.
Uncategorized
Recent articles from Thomas Hall