JGD 21.0: Finishing Novemeber with a showdown against the rebuilding Coyotes (6:30 pm CT, SNW) 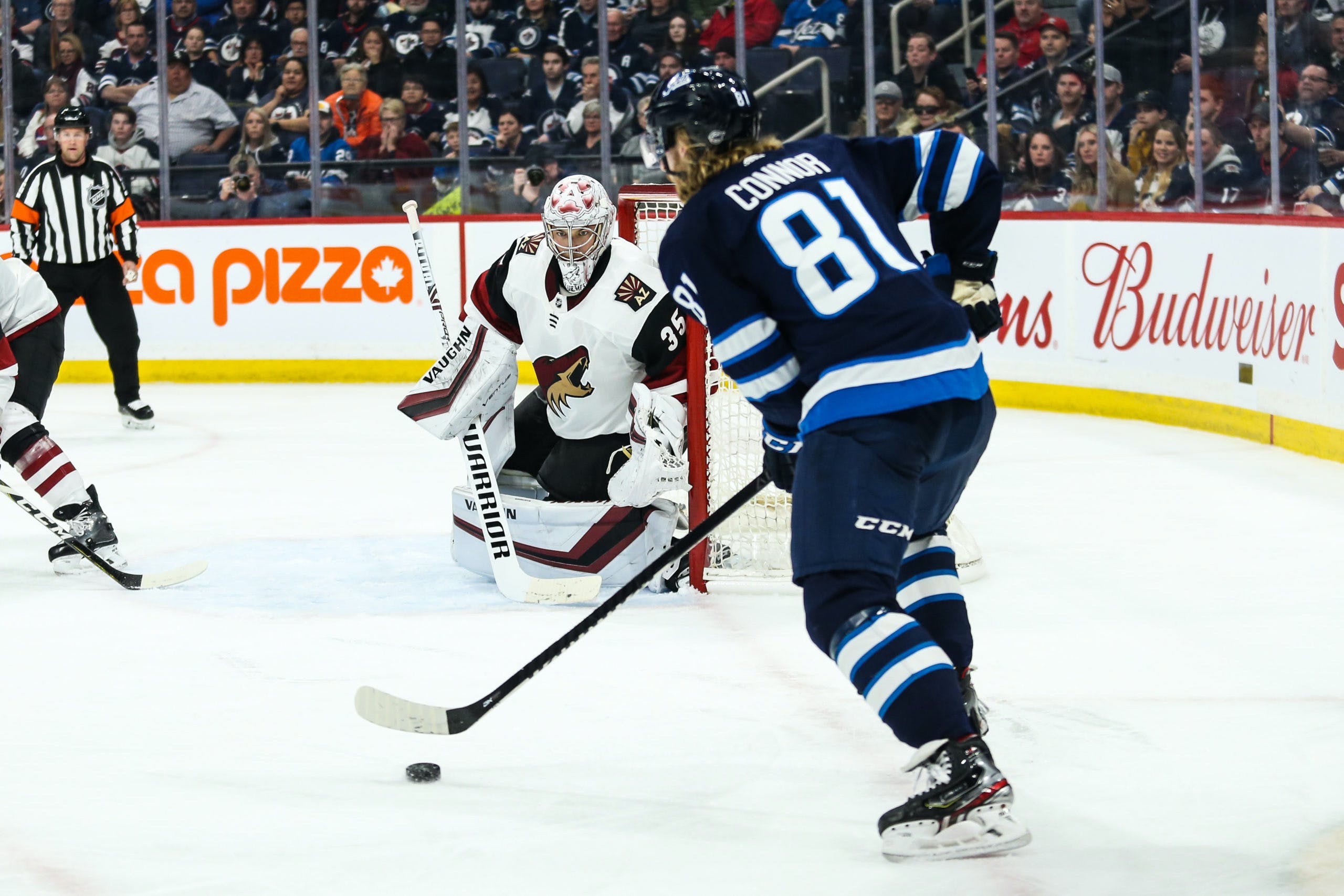 By Thomas Hall
1 year ago
Amid what’s been a drama-filled November, which has featured an unexpected scoring drought and a five-game losing streak, will soon draw to a close for the Winnipeg Jets, but first, they’ll need to host the 4-15-2 Arizona Coyotes at Canada Life Centre Monday night.
Thanks to a 4-2 victory against the Calgary Flames over the weekend, the Jets earned their first win since Nov. 16, snapping a dreadful five-game winless stretch. As their reward, this team is set to welcome the rebuilding Coyotes, who enter the night having lost two straight contests and also possess the second-fewest points (10) in the National Hockey League.
Since Winnipeg is slated to enjoy a well-deserved three-day break after this matchup, there’s probably no better way to finish off this hectic eight-day span – that’s included five games in just eight nights – than playing against one of the worst franchises in all of hockey, who’s also the newest member of the Central Division.
For a preview of this matchup, here are three interesting storylines ahead of the first meeting of 2021-22 between the Jets and Coyotes:

The CSW Line Expected to Remain Together

With the Jets struggling to generate consistent offence, coach Paul Maurice predictably called upon his old reliable trio of @Kyle Connor, @Mark Scheifele and @Blake Wheeler, and luckily doing so paid off hugely Saturday at the Scotiabank Saddledome.
Looking past the defensive woes this unit endured, they were responsible for two of Winnipeg’s four goals, both of which came from Connor, providing him with his 13th and 14th markers on the season. Additionally, Wheeler and Scheifele helped set up each of those goals from No. 81, allowing this duo to combine for a trio of assists on the night.
Following this line’s two-goal performance, understandably, Maurice and the rest of his staff are expected to utilize the same line combinations from their victory over Calgary, meaning @Riley Nash and @Nathan Beaulieu will once again serve as healthy scratches.
Considering Arizona’s skaters have scored the fewest number of goals per game (1.86) this season, according to NHL.com, perhaps the Connor-Scheifele-Wheeler line won’t struggle to advance the puck into the neutral zone as they have in previous games – fingers crossed.

While he’ll likely never admit to it, goaltender @Connor Hellebuyck has been one of the busiest netminders throughout the NHL in November, both on and off the ice.
Despite missing the first week of the month due to a non-COVID illness and the birth of his new child, Hellebuyck has still seen plenty of action in net thus far, starting in nine of Winnipeg’s last 10 games. Adding to this eventful stretch, the 28-year-old is expected to make his 10th start of November on Monday against Arizona, positioning him among the league leaders in games started this month.
Interestingly enough, though the 6’4″ goaltender’s schedule has been overloaded lately, he hasn’t been overwhelmed in his crease up to this point, making for a couple of stress-free contests. In total, the Michigan native has faced the 17th-most total shots against and the 18th-most high-danger shots against (47) at 5-on-5 among all goaltenders in the league this month, according to NaturalStatTrick.com.
Without the support from his teammates, both of those metrics would almost certainly be ranked inside the top 10, rather than outside of it – serving as another example of how the Jets’ defence has taken a dramatic step forward this season.
Assuming this club doesn’t take the Coyotes lightly, this contest should allow Hellebuyck to improve his career results – a 2.72 goals-against average and a .907 save percentage through nine games – against this opponent.

Emphasis on Scoring First Against Arizona

Through the first quarter of the 2021-22 campaign, the Jets have continuously fallen behind early on, leaning on their late-scoring ability to win numerous games from behind in the final 20 minutes of play. But against the Coyotes, they may be able to take charge out of the gate.
As everyone knows by now, Arizona’s offence is considered one of the worst in the NHL, paired with their defensive struggles, they’ve allowed the third-most goals against per game (3.57). In particular, the majority of those scores have occurred during the first 40 minutes, where they’ve allowed 52 total markers – most in the league.
Because of all those goals against, the Coyotes are currently tied with the Montreal Canadiens for the most losses (11) when trailing first, which has been a key reason for their awful record this season. Since six of those 11 defeats have come this month, chances are they could find themselves trailing behind in the first period during this Monday night matchup at Canada Life Centre.
Taking all of these factors into account, there should be a much higher emphasis on capturing an early lead from the Jets’ standpoint, as doing so could potentially allow them to control the flow of the game through all 60 minutes, in turn, extending their winning streak to two straight games.
Uncategorized
Recent articles from Thomas Hall