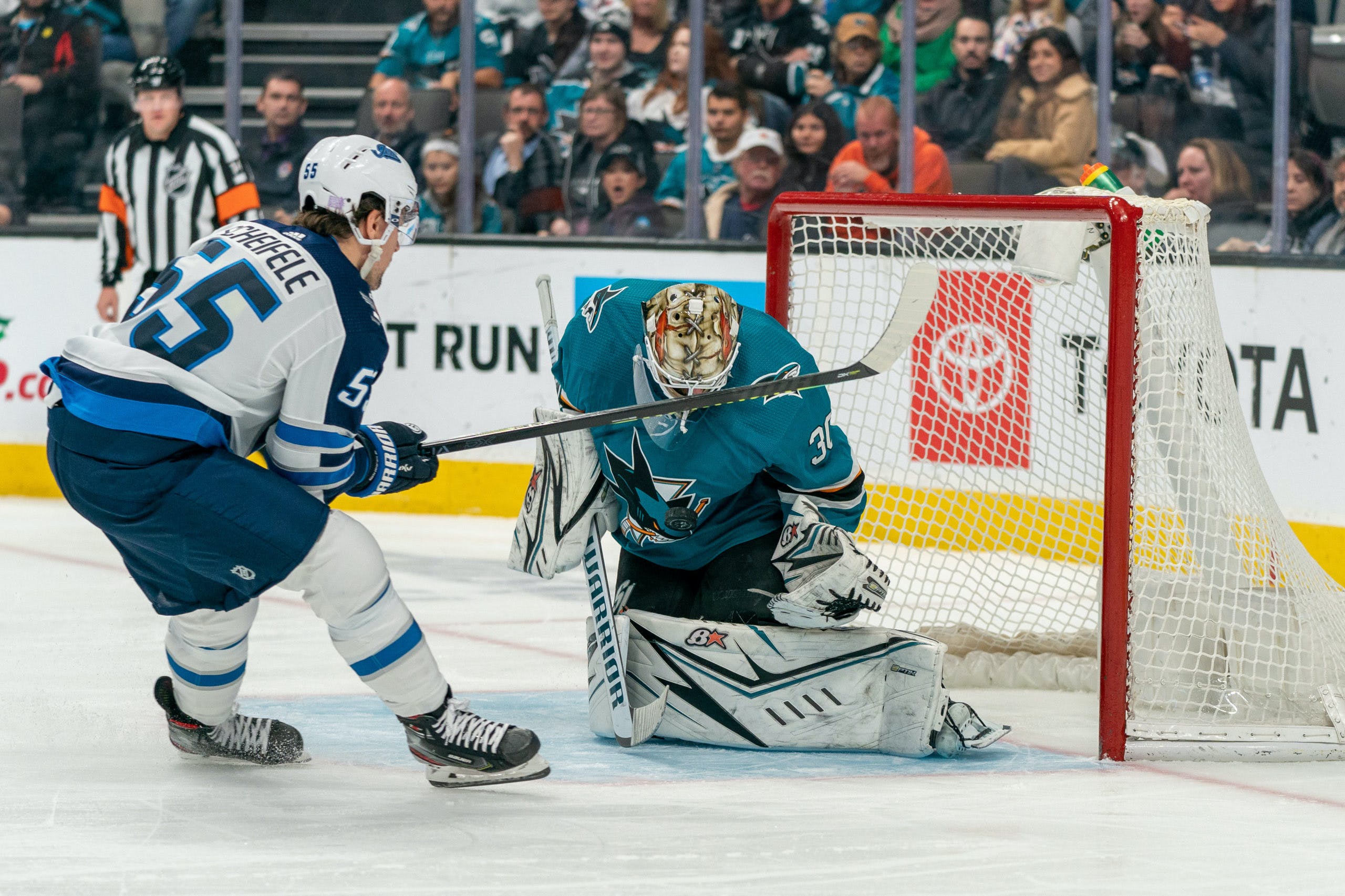 By Thomas Hall
1 year ago
Alert! There are Sharks ahead in San Jose located at the SAP Center, although not to worry, they haven’t taken a bite out of the competition over the last few seasons – ok, that’s enough of the shark puns.
After falling 4-1 in the 2021-22 season opener, the Winnipeg Jets have travelled to Northern California for a Saturday night date against the San Jose Sharks, who haven’t enjoyed a winning season since 2018-19. But similar to the Anaheim Ducks, nothing should be taken for granted against this rebuilding team, because as we all know, games aren’t played on paper.
Luckily for the Jets, who failed to sneak more than one goal past Ducks netminder @John Gibson, they won’t have to encounter an all-star goaltender during their second game of the season as @Adin Hill will draw the start in goal during the Sharks’ regular-season opener.
For Hill, the 25-year-old has displayed some encouraging flashes at the NHL level, but has only appeared in 49 career games over four seasons, resulting in a 2.79 goals-against average and a .909 save percentage.
With Winnipeg searching for its first win of the season, here are three storylines fans should be aware of ahead of this matchup:

Since forward @Mark Scheifele only served three-quarters of his four-game suspension during last season’s playoffs, the 28-year-old was forced to sit out Winnipeg’s season opener back on Wednesday. But now, he’s eligible to return to the team’s active roster, which certainly missed his presence in Anaheim.
Coming off a shortened campaign where he registered 21 goals, 63 points and a career-best 1.13 points per game through 56 contests, Scheifele will surely be looking to add some much-needed intensity to the Jets’ offence. Though the club’s top line was centred by veteran @Paul Stastny a few nights ago, he’s been returned to the third line, allowing No. 55 to be reunited with Nos. 26 and 81.
Sure, the trio of @Kyle Connor, @Blake Wheeler and Scheifele may seem a bit of a recycled idea at this point, which is a reasonable argument to make, especially given this unit’s defensive metrics in 2020-21. But with coach Paul Maurice at the helm, no one should be expecting anything less this early in the schedule.
For now, let’s hope the Jets’ first line can create plenty of havoc in the offensive zone without surrendering an overwhelming amount of scoring chances inside the defensive zone.

After making his NHL debut Wednesday, almost everyone was expecting rookie @Cole Perfetti to draw out of the lineup in place of Scheifele during the following contest, however, the 19-year-old won’t be spending his Saturday night in the press box – a fairly shocking development.
Confirming this news following Winnipeg’s morning skate, Maurice announced @Evgeny Svechnikov will serve as the team’s 13th forward in San Jose, making him a healthy scratch. As a result, Perfetti will remain on the third line and will be joined by @Adam Lowry once again, who’s expected to continue serving as a mentor to the talented young skater.
Additionally, Stastny is also expected to be positioned alongside these two skaters, in turn, bumping @Kristian Vesalainen down to the club’s fourth line.
While this is great news for Perfetti and the Jets, unfortunately, he might be hard-pressed to increase his ice time from last game, which came in at just 9:49 minutes. Unless the coaching staff decides to adjust the power-play units, the former first-round pick will likely be limited to 5-on-5 opportunities for a second consecutive contest.
Still, it’ll be extremely important for the 5’10” forward to build off the success he enjoyed against the Ducks, where his impressive puck carrying and hockey senses each proved to be eye-catching through all three periods.

Similar to the season-opener in Anaheim, Winnipeg is aiming to start strong out of the gate for a second straight game, this time in San Jose. In saying that, this club is also hoping its skaters can be more effective with their shot selections, which plagued them last time out.
Despite out-shooting the Ducks 15-6 in the opening period, only three of the Jets’ scoring chances were located in high-danger areas. Making matters worse, none of them occurred at 5-on-5, with all three taking place with the man advantage.
This time around, it’ll be crucial to create several line rushes to the Shark’s net while also creating plenty of traffic in front of Hill during both even-strength and power-play situations. In addition, replicating the impressive puck movement that was on full display a few nights ago is also expected to be a focal point, as doing so will likely open up additional shooting lanes in the offensive zone.
With Scheifele back in action, paired with a top-six group that includes Connor, Wheeler, @Nikolaj Ehlers, @Pierre-Luc Dubois and @Andrew Copp, this west-coast showdown has the potential for a much more successful outcome in favour of the Jets.