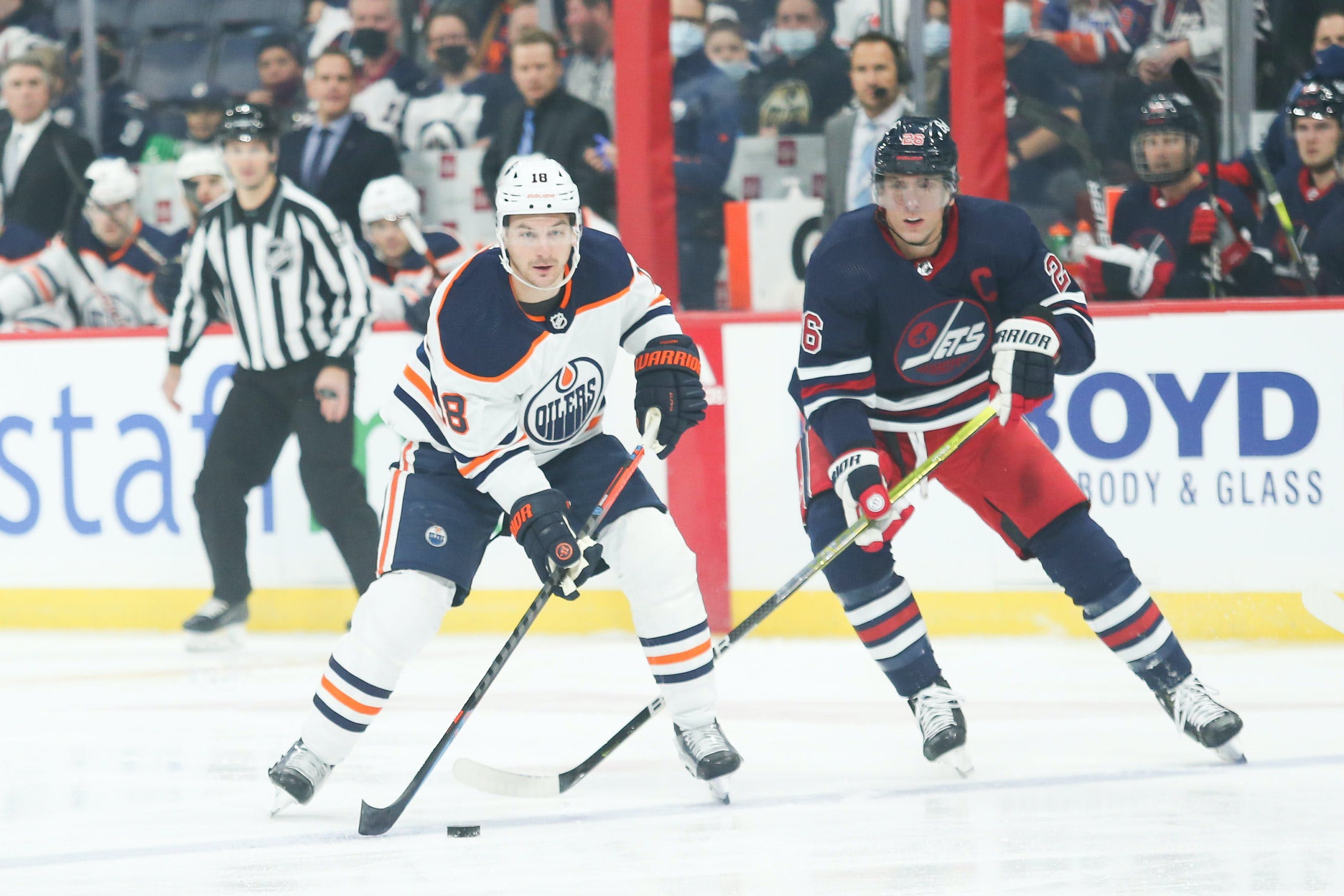 By Thomas Hall
1 year ago
After coming away with a convincing 5-2 victory Tuesday night, the Winnipeg Jets will attempt to continue their winning ways over the Edmonton Oilers when these two franchises meet for a second straight contest Thursday, as this home-and-home series shifts to Rogers Place.
Just two nights ago, in surprising fashion, the Jets were able to slow down the Oilers’ high-powered offence, holding them to without an even-strength goal while also keeping them off the scoreboard until the third period. More importantly, they didn’t allow captain @Connor McDavid to take control of the game, as the superstar forward was seemingly pressured all night long.
Though Winnipeg deserves plenty of credit for this outstanding defensive performance, it’ll be even more impressive if this team is able to replicate its showing during a second consecutive game. Since Edmonton’s skaters are surely planning to make some adjustments on their end, particularly in the offensive zone, holding this explosive offence at bay once again will likely be a much tougher assignment.
But hey, crazier things have occurred in the National Hockey League.
For a preview of this exciting rematch, let’s explore three intriguing storylines that could impact this matchup between the Jets and Oilers.

One of the most effective ways to slow down the Oilers’ offence is to force them to defend in their own zone for extended periods of time, and after doing just that on Tuesday, the Jets will look to replicate that performance during this showdown at Rogers Place.
How can this team accomplish that feat? Well, a key aspect will likely involve maintaining their high level of physicality from last game, which saw them outhit their opponent 25-14. Since 12 of those hits came from forwards, including five from @Pierre-Luc Dubois, sustaining those results for a second straight contest will be crucial, especially while forechecking.
Even without possession, Winnipeg’s forwards can have a major impact in the offensive and neutral zones, as by pressuring their opposition, they can largely neutralize Edmonton’s transition game – a critical component of their offence.
If the Oilers can’t attack off the rush and struggle to advance the puck up the ice cleanly, just as they did last time out, odds are they won’t be able to generate plenty of quality scoring chances against goaltender @Connor Hellebuyck. And it goes without saying, that’d be another significant victory for this club.

Ok, it’s time to address the elephant in the room that is captain @Blake Wheeler. Without question, the 35-year-old has endured a pretty rough start to the 2021-22 season, between battling COVID-19 and bouncing between multiple different line combinations, nothing has come easy for him thus far.
Once @Mark Scheifele returned to the line-up, coach Paul Maurice reshuffled his forward lines once again, positioning Wheeler alongside @Adam Lowry and Scheifele. Most recently, the veteran forward has been paired with @Kyle Connor and Dubois, which surprisingly served as a pretty effective trio Tuesday night.
At first, it seemed like Wheeler’s lack of quickness would dramatically hinder this line’s productivity, but through one game, that hasn’t been the case. While there’s no hiding the fact that the 6’5″ forward is beyond his prime years, he’s still capable of providing a modest level of upside, which he displayed during the first meeting against the Oilers.
Despite being held pointless at 5-on-5, the Jets’ captain found a way to make his presence felt even without registering a point, as he posted two shots on goal, two scoring chances and also helped set up his teammates on a few quality chances as well. Most notably, the right-hander created a high-danger chance for defenceman @Josh Morrissey, by juking around his defender before feeding the puck into the slot.
Paired with the remarkable connection between Connor and Dubois, who continue to develop their relationship each game, Wheeler will receive another opportunity to help complement this powerful duo when he takes the ice for his 992nd career NHL game.

Emphasis on Starting Fast Out of the Gate, Again

If you haven’t noticed by now, this season’s version of the Jets have been prone to scoring early and often during the early stages of all three periods, especially during the final two frames.
In total, this team has recorded 21 of its 51 total goals during the first five minutes of a period, with three of them coming within the opening minute, according to Jets PR. Digging deeper, four skaters have been responsible for at least three goals of that variety, including Dubois, Connor, Lowry and @Andrew Copp.
With this in mind, considering the Oilers will undoubtedly be aiming to bounce back strong Thursday, striking first for the first goal of the game could potentially go a long way in helping the Jets secure consecutive victories. Since this club features a tendency of scoring early in periods, what better time to continue that impressive trend than during this upcoming matchup.
After Lowry opened the scoring just over two minutes into Tuesday’s contest, which set the tone early on, a similar mindset will likely be required this time around if Winnipeg is to capture an early lead over Edmonton once again.