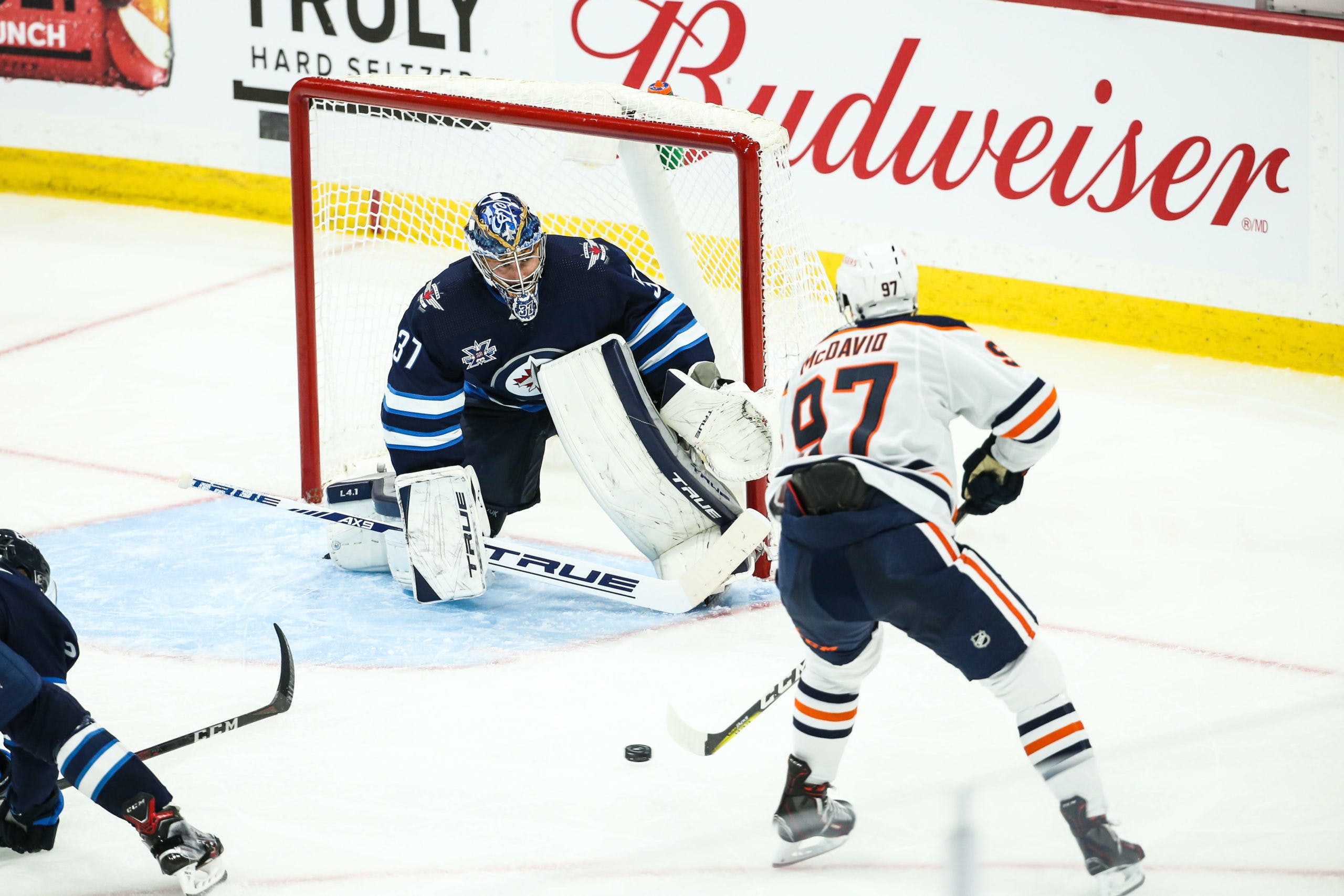 By Thomas Hall
1 year ago
The Edmonton Oilers are set to visit Canada Life Centre on Tuesday for the first time this season, and so too is captain @Connor McDavid, who’s already off to another ground-breaking performance.
Surprise, surprise… McDavid has been dominating the opposition thus far, scoring a mind-blowing 10 goals and 27 points through just 14 games. Thanks to his most recent two-point performance over the weekend against the St. Louis Blues, the Oilers’ superstar forward passed the 600-point mark for his career, which he accomplished during his 421st game in the National Hockey League.
Not only will the Winnipeg Jets be tasked with slowing down No. 97, but they’ll also be forced to defend against his dangerous partner, @Leon Draisaitl, who currently leads the league in goals (15) and points (31). If game-planning against that dynamic duo wasn’t difficult enough, Edmonton picked up @Zach Hyman over the off-season and he’s already added eight goals and 13 points to their offence – making for a difficult assignment.
For those brave enough to watch this Canadian showdown, here are three storylines ahead of the first meeting of 2021-22 between the Jets and Oilers:

Unfortunately, the Jets won’t be receiving any reinforcements ahead of this matchup against the Oilers, as veteran @Paul Stastny remains sidelined with a foot injury and is expected to miss his fourth consecutive game.
Making matters worse, it’s also unclear if Stastny will be cleared for the team’s upcoming two-game road trip, which includes a back-to-back series against Edmonton and the Vancouver Canucks. Unless the 35-year-old participates in Wednesday’s practice, odds are he’ll remain home and won’t travel with his teammates, pushing his next chance to return on Nov. 22 against the Pittsburgh Penguins.
Without Stastny, coach Paul Maurice is planning to call upon the same line pairings from the conclusion of Saturday’s contest against the Los Angeles Kings, which saw mid-game changes to the top-nine group.
On the first line, @Kyle Connor and @Pierre-Luc Dubois are now joined by captain @Blake Wheeler. Behind them, @Andrew Copp, @Mark Scheifele and @Nikolaj Ehlers have been reunited on the second line. As for the third line, @Adam Lowry will continue to be tasked with creating chemistry with new linemates, as he’ll skate alongside @Jansen Harkins and @Evgeny Svechnikov.
Considering the lethal one-two punch of McDavid and Draisaitl will be looking to continue their red-hot starts to the 2021-22 season, it’ll be crucial for Winnipeg’s line-up to create consistent pressure in the offensive zone through all three periods – an aspect where they’ve struggled in recently.

Given the number of elite scorers the Oilers currently feature, it’s understandable as to why they’ve been able to dominate with the man advantage over the last several seasons. But from the Jets’ standpoint, if they hope to be successful Tuesday, they’ll need to stay out of the penalty box.
Obviously, remaining disciplined is usually easier said than done, especially against an extremely quick opponent. Having said that, though Edmonton possesses the best conversion rate on the power play (41.9%), they’ve only drawn 47 penalties on the campaign – that’s fifth-fewest in the league.
So while they’ve been remarkably effective with the extra skater, it’s not like they’re earning a significant amount of opportunities to operate with the upper hand, which should be the focal point for Winnipeg. Furthermore, the majority of infractions this team has drawn have been the result of poor positioning, and that’s an area Maurice hopes his club can improve on during this contest.
But if they’re unable to achieve that goal and ultimately take multiple trips to the penalty box, then there’ll likely be a ton of pressure placed on the team’s 30th ranked penalty-killing unit, potentially forcing them to play from behind all game long.

Arguably, the biggest obstacle goaltender @Connor Hellebuyck has faced up to this point has been becoming a new father, you know, along with attempting to build that cradle during the off-season. But now, he’s preparing to take on one of the top offences in the league that’s led by two generational talents, easy enough right?
Historically, Hellebuyck has certainly endured his fair share of rough performances against the Oilers, as he owns a career 9-10-1 record, 3.35 goals-against average and a .893 save percentage over 20 games played. Last season, the 28-year-old witnessed those metrics fall even farther, resulting in a troubling 3.96 goals-against average and a .877 save percentage through seven contests.
Granted, Winnipeg’s defence has considerably improved from a season ago, thanks to the additions of @Nate Schmidt and @Brenden Dillon. While those two acquisitions have taken some pressure off the 2019-20 Vezina Trophy winner, he’s still faced 64 high-danger shots on goal at 5-on-5 this season, which is tied for 14th-most among all goaltenders in the league.
Unless Hellebuyck’s teammates are successful at keeping Edmonton’s skaters to the perimeter, he’s likely in store for a pretty hectic night of hockey, and that’s something he hasn’t exactly been accustomed to on a nightly basis early on in the schedule.