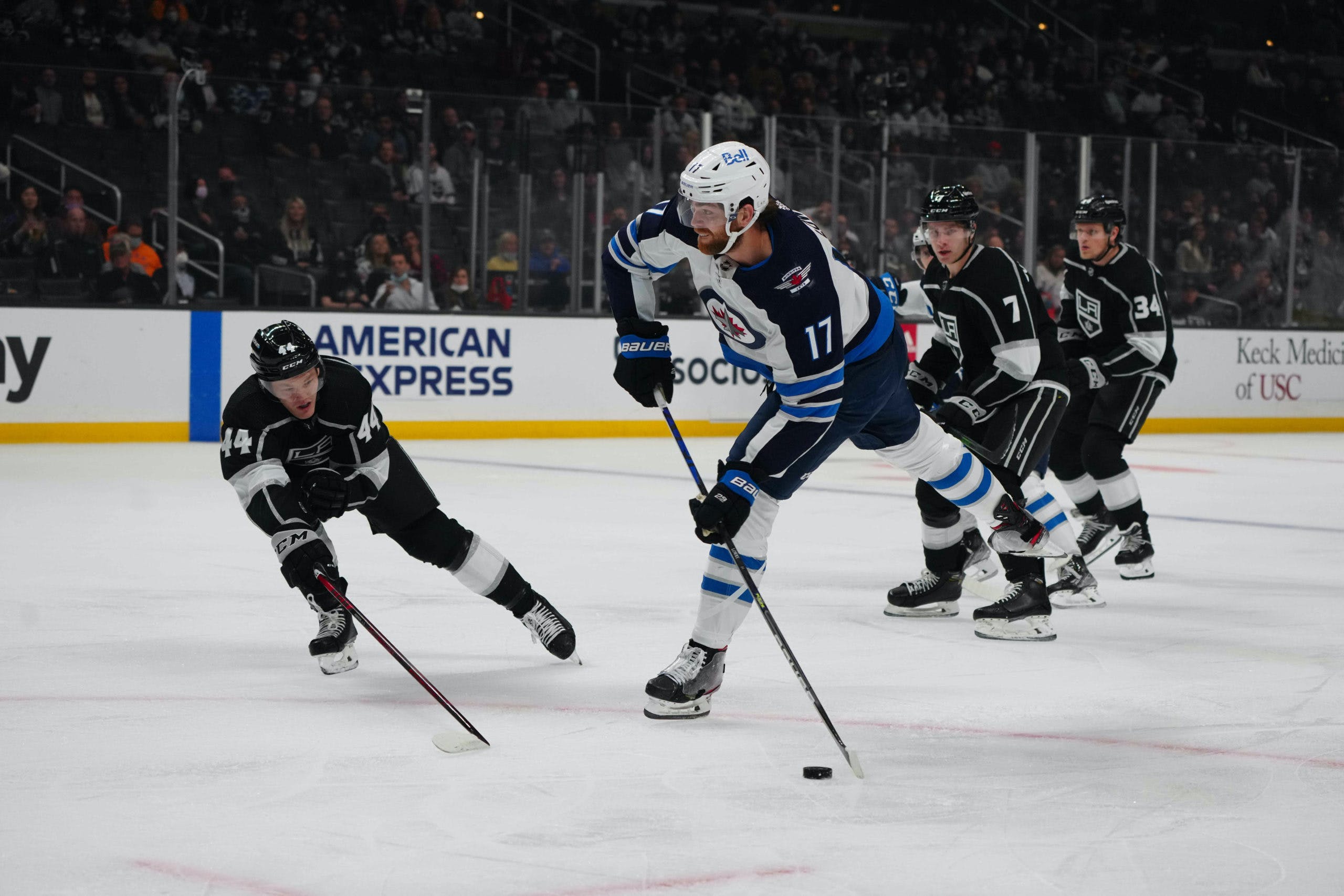 By Thomas Hall
1 year ago
Following a 4-1 victory over the San Jose Sharks, the Winnipeg Jets snapped their two-game losing streak and will be searching for a second straight win when they take on the Los Angeles Kings in primetime action Saturday night.
Just over two weeks ago, these two teams met each other for the first time of the season, which saw forward @Pierre-Luc Dubois leading the Jets to a 3-2 victory thanks to his two-goal performance. Since then, the Kings have rebounded extremely well, in fact, they’ve rattled off seven consecutive wins over this recent span, positioning them fourth in the Pacific Division.
Despite being without two key pieces on the backend, in @Drew Doughty and @Sean Walker, Los Angeles’ top-six forwards have led the way for them as of late, combining for 37 points over these last seven games. In particular, forwards @Alex Iafallo and @Adrian Kempe have served as much-needed spark plugs for this group, as they currently rank first and second respectively on the team in goals and points since Oct. 30.
For Winnipeg, who struggled to hold San Jose’s forwards in check at times last game, they could be in for a high-scoring affair if those same issues reappear once again during this contest – potentially making for some quality entertainment.
So without further delay, let’s explore three storylines ahead of this second meeting of 2021-22 between the Jets and Kings.

Yes, that’s right, Paulie Walnuts – aka. @Paul Stastny – is set to miss his third consecutive game due to a nagging foot injury.
Unfortunately, the 35-year-old still has yet to shake this injury bug, which has prevented him from skating on the ice ever since last Saturday’s game against the New York Islanders. After blocking a shot with his foot, unintentionally, he’s been sidelined ever since and hasn’t been able to participate in any practices.
As a result, Stastny will be forced to sit this one out against the Kings, pushing his next chance to return to action on Nov. 16 when the Edmonton Oilers come visit Canada Life Centre.
In the meantime, Winnipeg must move forward with this Saturday night tilt against Los Angeles, which is expected to see the same line combinations from the conclusion of Thursday’s contest. While the first and fourth lines remained unchanged, coach Paul Maurice decided to adjust his club’s middle two lines halfway through the game and is planning to start this showdown with those same pairings.
With that in mind, forward @Nikolaj Ehlers will return to the second line alongside @Blake Wheeler and @Mark Scheifele. As for the third line, @Andrew Copp and @Adam Lowry will remain together – they’re reunited and it feels so good – and will continue to be joined by @Jansen Harkins.
But if this group struggles to generate offence, aside from the @Kyle Connor, Dubois and @Evgeny Svechnikov line, it wouldn’t be shocking to see Maurice turn the blender on for a second straight game.

Last time these two teams met, the Kings dominated in the face-off dot, winning 63 percent of the draws, including 66.7 percent of them within the defensive zone. While winning face-offs might not seem like a crucial aspect of this current era of hockey, however, it could prove to be vital Saturday night.
On the season, Los Angeles currently owns the sixth-highest overall face-off win percentage (53.2%) in the league, although the majority of their success has come inside their own zone. In total, they’ve generated an impressive 54.3% defensive zone FOW percentage, which currently ranks fifth-highest in the league.
As for the Jets, they haven’t been nearly as effective in the face-off circle this season, at least from an overall standpoint, posting a respectable 50.4% FOW percentage. In saying that, they own the seventh-highest offensive zone FOW percentage (54.2%), and those skills are likely to be put to the test during this primetime matchup.
For the road team, forward @Phillip Danault has served as their top face-off performer up to this point, generating a club-leading 58.9% overall FOW percentage through 14 games in 2021-22. In addition, the former Montreal Canadiens centre has also registered an incredible 59.1% defensive zone FOW percentage.
Leading the charge for Winnipeg in this department, Copp and Lowry have equally been extremely effective on face-offs so far, as each of them has registered an overall FOW percentage above 53 percent. Since they’re now both paired together, this club’s third line should be able to rack plenty of face-off wins moving forward.
Though it’s unclear as to how Maurice will handle these head-to-head line matchups, if the Danault and Lowry lines faceoff against one another, there could be continuous hard-fought battles within the red circles all game long.

Brenden Dillon Celebrating His 31st Birthday Against the Kings

Break out the party balloons and cake because defenceman @Brenden Dillon is celebrating his 31st birthday Saturday, although he won’t be receiving a day off on this joyous occasion.
While the birthday man should have plenty of time to enjoy himself before and after this contest against the Kings, he won’t be able to spend the entire day away from the rink. Having said that, who wouldn’t want to spend their birthday playing hockey, right?
For Dillon, the 6’4″ blueliner has previously played on his birthday several times before, although he’s only registered one career assist on his special day. Considering he still hasn’t earned his first goal with the Jets yet, there isn’t a better time for the veteran skater to accomplish both of those feats than during this upcoming matchup.
Along with cracking the score sheet, coming away victorious on your birthday is always a memorable treat and one that’ll hopefully come to fruition for Dillon on Saturday.
Uncategorized
Recent articles from Thomas Hall