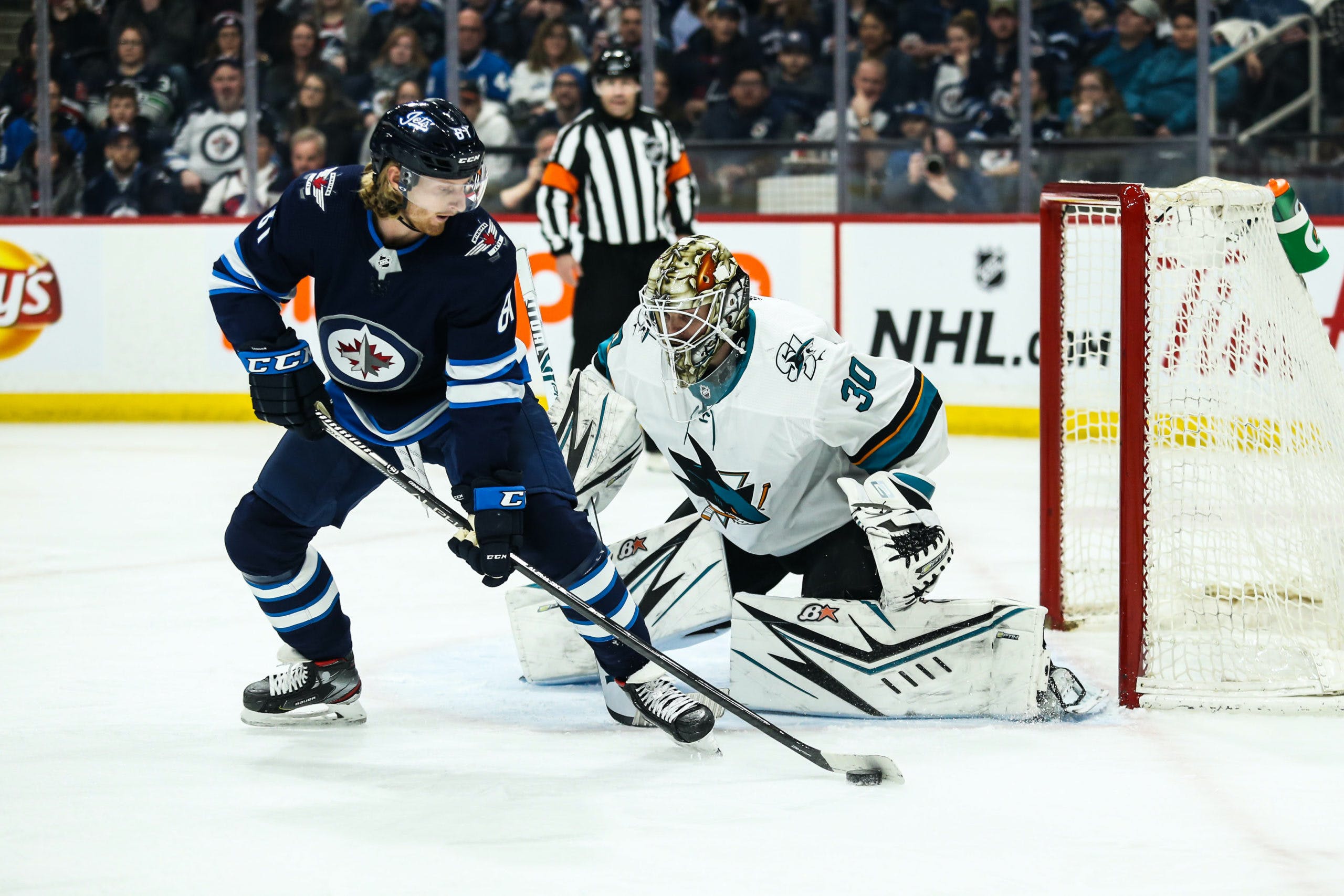 By Thomas Hall
1 year ago
And then there was one… game remaining in the regular season against the San Jose Sharks, who’ll visit the Winnipeg Jets at the Canada Life Centre on Thursday, with puck drop set for 7:00 pm CT.
In what’ll be the final meeting of the 2021-22 campaign between these two clubs, the Jets will be looking to avoid a season-series sweep as the Sharks have won each of the two previous matchups – one in regulation and the other in overtime. Luckily for the home team, their opponent is coming into this showdown largely shorthanded and will be without seven different skaters due to Canadian border restrictions.
As a result of a COVID-19 outbreak, San Jose will be forced to call upon some of its depth since players like @Kevin Labanc, @Erik Karlsson, @Jacob Middleton, @Matthew Nieto, @Radim Simek, @Marc-Edouard Vlasic and @Timo Meier are all unavailable and will remain at home.
Though this team is coming off a 4-1 victory over the Calgary Flames, with so many talented bodies out of the line-up, on paper, this appears to be a golden opportunity for the Jets to snap their current two-game losing streak while also earning their first win of the season against the Sharks. But as we all know, hockey is played on ice – not a sheet of paper.
For a preview of this showdown, here are three storylines ahead of this final meeting between Winnipeg and San Jose:

After missing Tuesday’s contest against the St. Louis Blues due to a lower-body injury, there was some optimism that veteran @Paul Stastny would be able to return to the ice either Wednesday or Thursday, unfortunately, he remains unavailable.
Set to miss his second consecutive game, Stastny’s next chance to make his return to the line-up will come Saturday against the Los Angeles Kings, although he’ll first need to participate in Friday’s practice or Saturday’s morning skate before receiving clearance. In the meantime, the Jets are expected to roll with the same line combinations from two nights ago, which will see @Jansen Harkins on the second line once again.
Filling in as Stastny’s replacement, Harkins will continue to skate alongside teammates @Andrew Copp and @Nikolaj Ehlers, keeping this talented trio together, at least for now.
As for the rest of the forward lines, they’re also expected to remain the same and will look as follows:
@Kyle Connor – @Pierre-Luc Dubois – @Evgeny Svechnikov
@Adam Lowry – @Mark Scheifele – @Blake Wheeler
@Dominic Toninato – @Riley Nash – @Kristian Vesalainen

Though the Jets have done somewhat of an effective job of scoring first this season, which has seen them strike first in six of their 12 games, they’ve been struggling in that department as of late and there’s no question it’s played a factor into their current losing streak.
Paired with only registering two goals over the last two contests, Winnipeg has allowed its opponent to score first in each of those matchups, with both of those goals occurring in the opening 20 minutes. As a result, this team has been forced to play from behind through the remaining 40 minutes in each of the last two games – that’s not an ideal situation to be in.
Considering the Jets have yielded 10 goals in the first period through 12 games in 2021-22 – tied for eighth-most in the league – coming out of the gate strong needs to become an area of focus for this franchise just as it was prior to this recent slide. If this group can replicate its encouraging performance from last game, where they dominated in high-danger scoring chances, then taking an early advantage should prove to be very attainable.
On the other hand, since the Sharks have scored first in each of their last five games, it’ll be equally important to also focus on limiting turnovers committed and advancing the puck effectively through all three zones, particularly the defensive zone.

Kyle Connor Continues to Lead the Charge Offensively for Winnipeg

With the Jets aiming to crack the scoreboard early on, they’ll undoubtedly be relying on Connor to help them accomplish that feat as he’s been one of their leading offensive weapons so far.
In total, the 24-year-old winger has posted a remarkable nine goals and 17 points through the first 12 games of the season, putting him on pace to score a mind-blowing 62 goals and 116 points over an 82-game span. Granted, there’s almost zero chance the left-hander reaches either of those incredible marks, however, there’s no denying he’s enjoying the best performance of his career.
Putting Connor’s stellar offensive showing into perspective, he currently leads all Winnipeg skaters in total goals and points, 5-on-5 goals (seven) and points (11), total shots on goal (49) and individual expected goals (5.68), according to NaturalStatTrick.com.
Additionally, the 6’1″ forward is also tied for the most power-play points (five) and the third-most power-play goals (one) on the team.
At this rate, assuming he remains healthy, Connor is well on his way to blowing past his previous career highs in goals (38) and points (73), both of which he set in 2019-20 before COVID-19 forced a league-wide shutdown. But in the short term, he’ll continue to be counted on to generate plenty of offence against those pesky Sharks.
Uncategorized
Recent articles from Thomas Hall