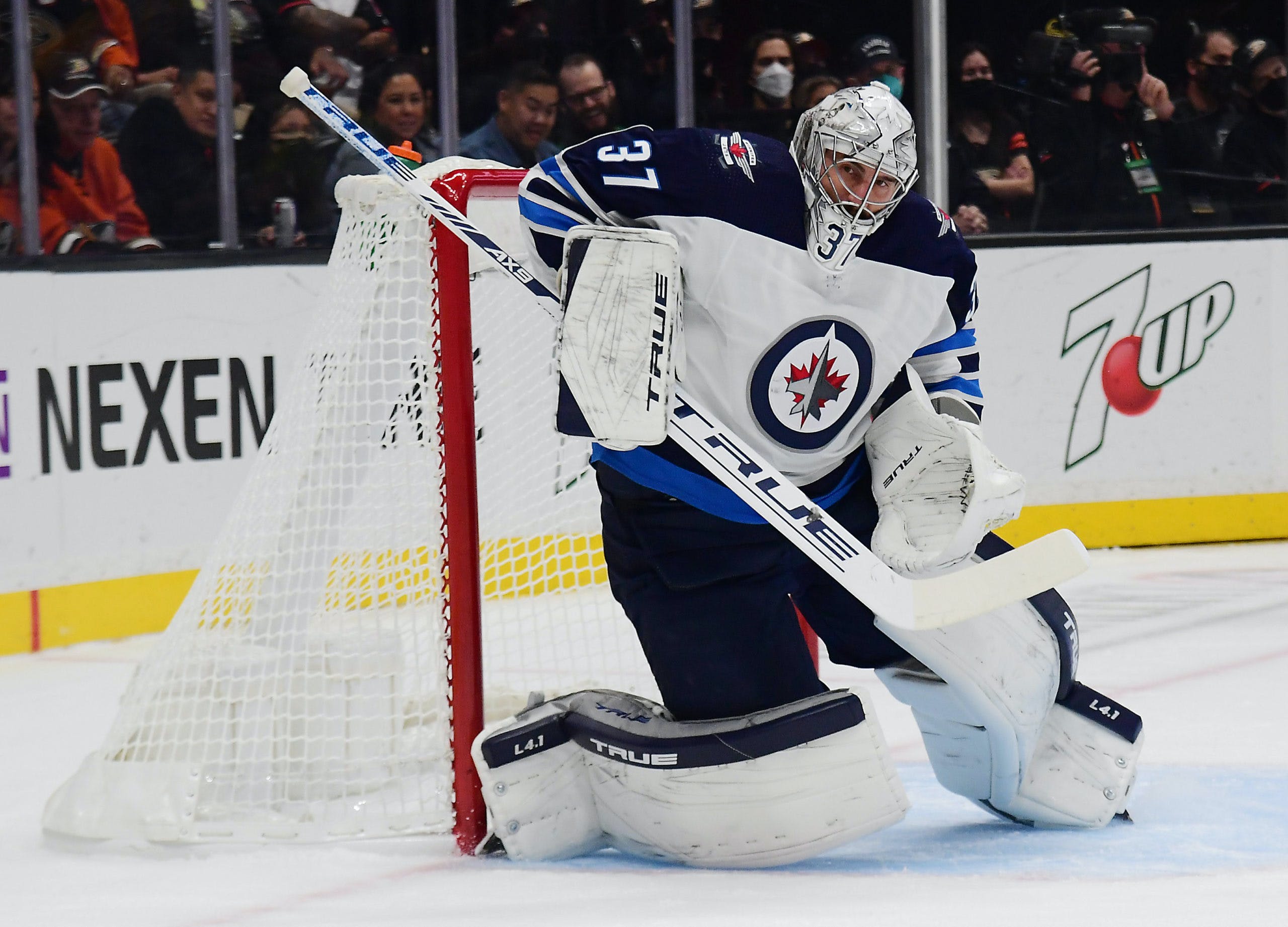 By Thomas Hall
1 year ago
The time has come to start another point streak, one that’ll hopefully run as long as the previous stretch, which lasted eight games.
Prior to the Saturday night showdown against the New York Islanders, the Winnipeg Jets had earned at least one point in each of their last eight contests. Unfortunately, the club’s impressive point streak came to an end against the Islanders, as they lost their first contest in regulation since Oct. 16.
While nothing is made to last forever, there’s no better time to bounce back and embark on a new series of positive outcomes than during Tuesday night’s affair against the St. Louis Blues. Though high expectations weren’t placed on this team ahead of the regular season, they’ve jumped out to a very strong start early on, resulting in a 7-2-1 record and positioning them second in the Central Division.
Looking ahead to what should be an extremely entertaining matchup, here are three interesting storylines that could impact this contest between the Jets and Blues, beginning with the highly-anticipated return of @Connor Hellebuyck.

Papa Hellebuyck is returning to action Tuesday, and will hopefully showcase some of his new dad strength during this showdown against the Blues.
After missing the Jets’ back-to-back series over the weekend due to an illness, the 28-year-old returned to practice Monday and also skated for a second straight day when his team hit the ice for their morning skate on Tuesday. In turn, he’s officially ready to return and will be making his first start in goal since Oct. 30.
Preparing for his eighth start of 2021-22, Hellebuyck will be tasked with facing off against St. Louis’ high-flying offence, which has been led by forwards @David Perron and @Vladimir Tarasenko so far. In total, this powerful duo has combined to score 10 goals and 22 points through 10 games, making both of them an area of focus throughout this contest.
While the 6’4″ netminder hasn’t faced this opponent since February 2020, his career results against them have proved to be pretty favourable, as he owns a 2.07 goals-against average, .933 save percentage, three shutouts and an 8-4-1 record over 13 contests.
As long as Hellebuyck can shake off some of his rust early on, the Michigan native should be fully capable of frustrating the Blues’ forwards all game long once again.

While Hellebuyck is returning to the Jets’ lineup, unfortunately, they’ll be without veteran @Paul Stastny for the first time this season as he’ll be forced to sit out due to a lower-body injury.
Experiencing some friendly fire Saturday night, defenceman @Neal Pionk blasted a shot from the top of the blue line in the offensive zone, which deflected off Stastny’s foot. Though he reported for his next shift, the pain ultimately proved to be too much, forcing him to miss the last few minutes of the third period.
Afterwards, there was some hope he’d be able to return to practice on either Monday or Tuesday, sadly, that wasn’t the case. As a result, @Jansen Harkins has been promoted to Winnipeg’s second line, joining teammates @Andrew Copp and @Nikolaj Ehlers.
For Harkins, this recent development should provide him with an opportunity to earn significantly more playing time than before, which has seen him average just 11:05 minutes of ice-time per game. Since this new role will almost certainly be temporary, it might be his only chance to prove he can play up and down the lineup more frequently moving forward.
In addition, coach Paul Maurice has decided to dress 12 forwards for the first time since Oct. 16 – nearly a month ago. With this in mind, the club’s third line will continue to feature @Adam Lowry, @Mark Scheifele and @Blake Wheeler. As for the fourth line, @Dominic Toninato, @Riley Nash and @Kristian Vesalainen will operate together on that unit.

Out of the gate, Winnipeg’s power play struggled mightily through the first two games of the season, falling 0-for-8 with the man advantage. Since then, this club has been far more successful with the extra skater, large in part because of the outstanding performance from defenceman @Josh Morrissey.
In the nine games since Oct. 18, Morrissey has scored all three of his goals on the power play, serving as a key factor in helping his team record the third-highest conversion rate (37.5%) among all 32 teams in the league during this same span. Thanks to this offensive showing, the 26-year-old has enjoyed a relatively strong start to the year, which is an aspect of his craft that regressed in 2020-21.
Comparing his encouraging results to the rest of his teammates, the left-hander blueliner currently owns the most power-play goals, is tied for the second-most shots on goal (seven), tied for the third-most power-play points (three) and owns the fifth-highest individual expected goals rate (0.49) with the man advantage, according to NaturalStatTrick.com.
But considering St. Louis possesses the third-highest success rate (88.2%) on the penalty kill this season, creating open shooting lanes and quality scoring chances on the power play could prove to be challenging for Winnipeg’s skaters in this rivalry matchup.
Uncategorized
Recent articles from Thomas Hall